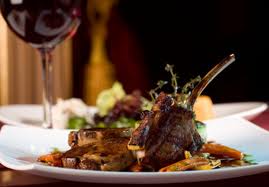 Those of you who have been reading the blog for a while know that every year I blog and live-tweet from the American Academy of Psychiatry and Law conference. This year we are hosted in Montreal, the land of fine dining and the most beautiful language in the world. Thus, the foodie picture. When I fly back I will be carrying extra baggage and I don't mean my luggage.

The poster session this morning was quite crowded and I wasn't able to get near most of them, but I did see a lot about legal and clinical implications of synthetic marijuana. Forty-one states have laws criminalizing sale and use of these new chemicals which go by a variety of street names. Effects on mental state can be extreme, including disorganized and violent behavior and hallucinations. So far there are no known longterm clinical effects associated with its use, however. Intoxication has been used in criminal defenses to mitigate culpability (although not generally successful as the basis for an insanity defense) and in states where the substances are still legal courts are struggling to figure out how it should play into a mental state defense.

Dr. Charles Scott gave an outstanding presidential address entitled "Believing Doesn't Make It So: Forensic Education and the Search for Truth." He discussed the evolving---and higher---expectations for forensic evidence, including psychiatric testimony, and how this should inform forensic training and practice.

The next session was a very nice (if I do say so myself) panel presentation about civil commitment of mentally ill offenders following release from prison. California has a mandatory civil commitment law which requires transfer of certain violent offenders with serious mental disorders to a psychiatric hospital at the end of incarceration. Legal challenges to this law were discussed and compared to the New Jersey system, which uses a non-mandatory administrative procedure instead. Finally, these procedures were compared to the state of Maryland where there is no established transfer policy but a wide degree of consultation and collaboration between the correctional and mental health systems, which in many cases obviates a need for hospital transfer.

[At this point in the day I stepped out for lunch and came back four courses later. Oh my, the food was amazing.]

The afternoon session was a very practical panel presentation about who should get access to forensic reports and the implications of HIPAA on evaluee access to protected health information in the report. Historically forensic reports were considered legal work products rather than medical documents, and as such an evaluee did not necessarily have a right to get a copy of or read the report. Under HIPAA some types of reports---such as a disability evaluation or fitness for duty evaluation---might be considered to be protected health information which an evaluee has a right to access. This is an evolving area, however. And under HIPAA, evaluees do not have a right to reports generated for civil, criminal or administrative hearings. This isn't a settled issue and there was good audience discussion.

The evening session was a mock trial which presented the new DSM 5 proposed criteria for hebephilia. The limitations and implications of the new criteria were discussed, which appeared to rely heavily upon an assessment of the victim's Tanner stage. The issue was presented in the context of a fictional sex offender civil commitment hearing, with three mock experts: one for the state, one for the defense, and one independent court-appointed expert. A strong case was made against inclusion when the defense expert testified that the new criteria could result in an 80 percent increase in false positive diagnoses.

So that was the first day. More to come so stay tuned. Live-tweets can be followed at: www.twitter.com/clinkshrink. [For those concerned about speakers' informed consent for social media coverage, all presenters are advised at abstract submission that sessions are recorded and they know that sessions may be covered by the media.]
Posted by ClinkShrink on Thursday, October 25, 2012