Falling: Faces of Depression and Anxiety (by Clara Lieu) 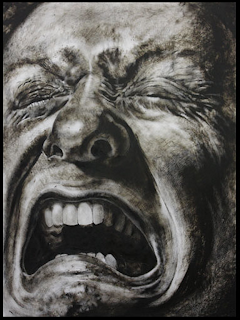 Clara Lieu is an artist at Rhode Island School of Design.

She has this amazing gift of observation. For example, she has this series on her website (claralieu.com) called Waiting. Here is how she describes it.

I am interested in the contradictions found in waiting figures: even though these figures stand in very close physical proximity to each other, it seems apparent that there is a significant emotional distance between them. Each figure seems locked within their own existence, unaware and unresponsive to the other figures surrounding them. Yet simultaneously, waiting in a line creates a situation where the gesture of one figure leads directly to the next, creating a fluidity between all of the figures. I am engaged by the individual and group anxiety that seems to permeate such silent and still scenes. 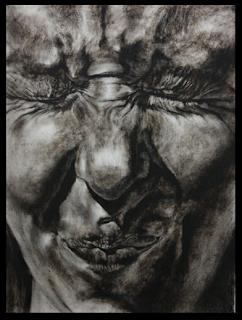 So true. My first iPhone line was like that.

She also completed a very impressive series of drawings and sculptures called Falling. This series, unlike her others, are very personal, based on her own experience with depression.

She emailed My Three Shrinks to let us know about her work. I was so impressed that I asked her more about herself and the motivation to show such an intimate view of her anguish.


I developed depression and anxiety at a young age, and lived with the condition for most of my life before being diagnosed and treated just a few years ago. It was startling to see myself clearly for the first time, free from the disease. Only at that point did I have the emotional distance that allowed me to to be in position to address this subject artistically. I knew at that point that I felt an uncontrollable drive and compulsion to make the work.

"Falling" was an unusual project me for in that it was told from a very personal, intimate perspective unlike my previous projects, which approached the subject matter with an emotional distance. Depression is something that happens privately, behind closed doors; it's a secret that most people keep hidden and never talk about in public. Unfortunately here's still a social stigma associated with depression that causes people with depression to conceal their true emotions from others. On a broader level, I'm looking to open a dialogue about a topic that is rarely discussed openly by exposing my own personal experience. 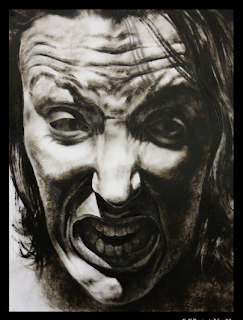 She goes on to describe this body of work:


"Falling" is a visualization of personal experience with depression and anxiety. The condition brought on frequent episodes where I felt emotionally and physically out of control. Unable to “release” myself from these episodes, I waited for the physical limitations of my body to end them. Recounting the affected years, I realize how accustomed I became to depression’s influence; many emotions and feelings belonged to it and not my own personality. After an extended, untreated struggle, a diagnosis brought relief, and the process of unearthing myself from the disease began. 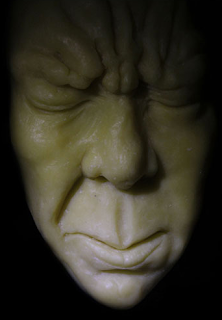 Her work can be found at claralieu.com.

She is quite amazing, Roy. Thank you for posting this. In addition to being such a gifted artist she plays the cello in a symphony orchestra. I hope others will go to her website and experience these works for themselves.

Those images are haunting and are an accurate outward expression of the internal anguish of depression and anxiety. Thank you for the blog.

I immediately went to her website and also "liked" her on Facebook. I especially liked her Wading series-beautiful. I have been encouraged in the past to explore my anxieties through my artwork but have avoided it. Wow, the Falling series has motivated me! Thanks for sharing and introducing an artist I can enjoy and relate to.

You are all welcome. I am grateful for Clara contacting us to let us know of her work, and for sharing her art with the world.
Thank you, Clara.

Patients who suffer from both anxiety and depressive symptoms of limited and equal intensity accompanied by at least some autonomic features. Thanks Clara for sharing this amazing post.