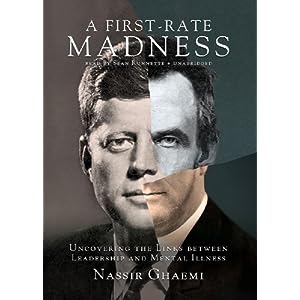 We've talked before about whether people with mental illnesses can be politicians (or pilots, or doctors).  Today, on Midday with Dan Rodricks on WYPR, psychiatrist Nassir Ghaemi, author of A First-Rate Madness: Uncovering the Links Between Leadership and Mental Illness makes the case that in good times, we need sane and stable leaders, but that in difficult times, "insanity produces good results" and that in hard times those with mental illness are better leaders.  He talks about how mood disorders lead people to be more realistic, empathetic, resilient, and creative.  Want to hear more?  Click HERE to listen.


Kind of nice to hear a positive take on psychiatric disorders for a change.  Tell me what you think.
Posted by Dinah on Tuesday, December 20, 2011

Barry Goldwater, you should be here now!

wv = flantrub; what you get when you sign up for U_Blog

Yup, Nero, Caligula, and Hitler. Caligula made his horse a senator. That did Rome a lot of good. As to the last one... well, I'll pass on this.

I left out Stalin. But you can come up with others equally as insane. Now, it is well known that Lincoln suffered from depression. But the book refers to "Madness." "Insanity." that is a far cry from depression. So the book is purposefully using an old term ("Madness in great ones must not unwatched go.") to get attention and to exaggerate, so I'm again tuning out. For the second time.

I've read before that depressed people actually evaluate situations more accurately and that people who are not depressed are often in denial about bad situations (overly optimistic). I think this is probably true, very generally speaking.

I question whether "madness" in the usual sense of the word would be of any benefit at all in a leader. Psychosis is not good for anything, imo.

Abraham Lincoln is said to have been bipolar. Psychiatrists today characterize that as mental illness, so I do not understand dismissing bipolar as mental illness in this context. A patient with bipolar is currently considered mentally ill, but Abraham Lincoln with bipolar was not mentally ill? Other bipolar leaders were Sir Winston Churchill and Theodore Roosevelt. We do not have to look to those who slaughtered people to find mentally ill among former leaders.

I think that part of gaining acceptance in society for those with mental illness is recognition that mentally ill people can be intelligent, perceptive, contributing members of society. If the only types of people we acknowledge from the past as mentally ill are Hitler and Caligula and from the present are killers like Jared Loughner (shot congresswoman Giffords), then we do a disservice to the ordinary and extraordinary people with bipolar and depression who are not mass-murderers.

@Sunny, of course what you say is true. I was responding to the author's use of the word "madness" in the title, which is an old term that, along with "insanity," indicated psychosis, and generally a serious form of it.

It is clear from the book's description and the review on Amazon that the author was talking about the positive aspects of mood disorders in that they can make a leader more sensitive and less likely to be falsely optimistic. This may be true. So as I indicated I was responding to the sensationalist title.

A psychologist in Baltimore, John Gartner, wrote a fascinating book on the role bipolar individuals have played in American history. He thinks we are genetically different from the Irish, Jewish, German, English groups we came from in that we have been "selected out," that is that many Irish stayed during the famine, or English stayed and changed their religion, or Jews thought the pogroms were better than the rigors of starting over in a new country. He thinks that we Americans have a greater degree of energy and optimism as a result, and that many transformational people in our past were bipolar.

I don't think that having a mood disorder makes a person good or bad, and that many of the greatest artists and leaders suffered from them.

The question ought not be, does mental illness make people better leaders, but instead, do/did some great leaders have mental illness or, is it possible to have a mental illness and be a great leader? Mental illness ,in and of itself, does not confer any positive or negative personality traits that would make one either a great leader or a tyrannical one, or simply a lousy one.
I know I could not lead a round of musical chairs when psychotic. Mostly, I am not in that state, and have been an effective leader in times of crisis, but I do not attribute that to having a mental illness.
The reality is that mental illness cuts a wide swath and so all sorts of people are affected. Some of them are great at all sorts of things, others, not so much.
I also don't buy the argument that various peoples are different now than back in the old country BECAUSE they left and others did not. While people did choose to stay behind, there were so many reasons for that. Americans may be more optimistic, who knows? But, many of the people who left their homes went to places other than America, sometimes because of a chance ticket exchange on the boat coming over. Nothing is ever so simple as many authors would have you believe. Simple and powerful sells books whether or not there is any foundation in science or common sense.

I think most of us would agree that while there have been great leaders who have had mental illness, there are certain personality traits or illnesses which are exceedingly dangerous when they exist in a person who has risen to complete power: paranoid trends, grandiosity, sadistic inclinations and cruelty, hatred for groups not ones own or of a different origin, an inability to work or confer with others, and a total lack of human empathy.

When we think of the monsters of history many of these traits are present.

Madness + opportunity = unpredictable/uncharacteristic BIG thinking and decisions. Does this equation mean that in times of crisis, the best path to resolution might be through creative, off the wall thinking, rather than the "been there done that" model?