Like Dinah, I also was thinking of writing something. I went to Twitter, and saw that many people were saying what they were doing at the time of hearing about the attacks. It made me think -- for the umpteenth time -- where I was and what I was doing at that time.

If any of you readers would like to describe what you were doing on 9/11/2001, the day of the terrorist attacks, please feel free to do so in the comments.

I was in my private practice office at GBMC seeing my first patient of the day. A very healthy, but very anxious older man with frequent physical complaints. Very nice guy. We were just finishing a therapy session (~8:50am) and I sent him out and was writing my note. My office was in a hospital office building in a suite run by a primary care physician, so there were also several exam rooms, a large front office with a receptionist and two office staff, and a waiting room with maybe a dozen chairs.

The first plane hit at 8:46 am ET (detailed timeline here on Wikipedia). 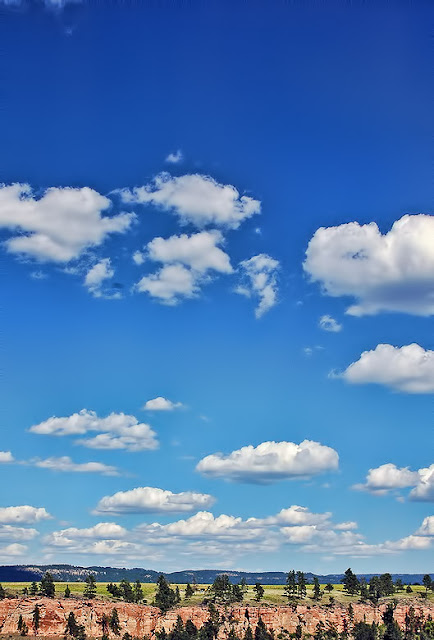 My 9am patient, a middle-aged woman with even more anxiety problems whom I had helped with a severe benzo addiction, came back early to tell me that a plane had crashed into one of the twin towers in NY and that another one was heading to DC. My initial reaction was disbelief. She must have gotten that wrong. I go out to the front office where everyone is crowded around a TV, listening to the news. My 8am patient is still there.

She was my last patient of the day. Everyone else cancelled. If they hadn't, I would have. The day was filled with fear, uncertainty, and doubt. But there was a camaraderie. We all grew closer with this common experience. The images, burned into our collective brains.

The one peaceful image that equally burned into my brain: for four days I gazed for long periods at the sky in amazed wonder. Not a single plane. Not a single jet entrail drifting across the sky. "This must be what the sky looks like in Wyoming," I recall thinking. Beautiful! I'm tearing up just thinking about it now. I've still never made it to Wyoming. But I will never forget.

Email ThisBlogThis!Share to TwitterShare to FacebookShare to Pinterest
Labels: 9/11, neverforget

There are moments in everyone’s life which are terribly traumatic, which each person will never forget, but it is all too common to think that our own pain, severe as it might be, will be forever remembered by others. As a group we Americans have been fortunate. We often think that a disaster to us has ultimate significance when much greater disasters to other peoples are quickly back page news.

September 11 produced a great loss of life, yet there were attacks on small islands in the Pacific in which more Americans were killed, attacks and islands which are barely known today. The Japanese had two nuclear attacks and now are facing the aftermath of a meltdown. More French died at Waterloo than the number of soldiers killed on both Union and Confederate sides at Gettysburg. And so on.

Part of the trauma comes from the surprise of the attack, the lack of preparation, the seeming randomness and how easily the disaster might have been averted. The sense of destiny. The Titanic. Franklin Roosevelt called Pearl Harbor “a day that will live in infamy.” How many Americans could tell you what day that was?

I must be too old! Pearl Harbor Day was December 7, 1941. I wasn't born until 1951, but my husband was born in Honolulu April 22, 1941 where his Naval Captain father was based. Luckily, just before 12/7 his dad was transferred to San Diego, then later in the War to teach at the Naval Academy at Annapolis.

On 9/11 it was before 6am in California when the first plane hit. My husband woke me saying "there has been a bad plane crash". I was due to speak for a professional photography association that evening and needed to leave quickly in order to make the drive in time. My husband suggested I not go, but it was not clear this was a disaster with national implications at the time I left and it was too early to phone my contact in Los Angeles, so I started driving south. Once it was late enough, I called my contact and he urged me to come. By the time the news unfolded and he spoke to other people in the association I was halfway there and the decision was made to go ahead with the meeting. The meeting hall was "standing room only", we all had dinner together, I gave my presentation, and little was said about the news of the day. I did listen to the news in my car all the way there, and all the way home. It did not really sink in, though, until I finally saw television coverage and photographs.

During this anniversary I have have heard some heart-wrenching stories on NPR. It is the individual stories that bring life to the story. Ultimately, this attack is remembered not because of the huge loss of life compared to any given battle or war, but because we felt safe and suddenly we did not feel safe in our own country.

But sunny, why don't wee feel safe now? Why didn't our country work on revisiting and capitalizing on our strengths and walking AWAY from the precepts of terrorism (alienation, suspicion, promoting outgroups, intolerance, exclusion, etc).

Roy, your post prodded me into writing, and it became so long that I made it a post on my blog.

I guess I could sum it up by asking, what is it exactly that we should never forget? I think we've been remembering the wrong things, altogether, and I'm very sad.

Preview is my friend...

Sunny, I'm sorry I mangled your name. And I meant We as everyone and not wee as tiny.

Where was I? Getting up and watching the news at breakfast. It had all happened while I was asleep, in the middle of the night in australian time.

I wrote a post about it. I can't believe that it was 10 years ago. We aren't American but we grieve with you today.

Where was I? I was in middle school and it was the early morning in California. My parents had both woken up and already left for work before my brother, sister, and I woke up to get ready for school.

I remember my brother coming out of his room into the kitchen and saying "well the twin towers are gone". I did not grasp the full concept of it until my carpool came to pick us up 5 minutes later. My good friends mom drove us to school, her husband was on a business trip in new york and scheduled to fly home that morning, she had not yet been able to get in contact or hear from him. Seeing her reaction and hearing from her the exact extent of damage scared me, it was that car ride that I realized what had happened.

During school that day we watched the news coverage and talked about what was happening. It was the focus of every class, normal subjects/tasks were suspended. I am sure the school had counselors and support avialable if needed, but I mainly remember watching the news and the images.

Later in the morning I heard from my friend that her dad was okay, his flight was supposed to leave an hour after the attacks but was now grounded with every other flight.

Although I was on the west coast, I remember that morning when news of new attacks were still coming in, worrying that there would be an attack near SF.

Alright - I started writing a response, and then it got ridiculously long, so I posted it on my blog (I've had the blog for nearly 2 years and this is the 4th post - which tells you how active I am on it!). Here's the link, for those interested in reading: http://neurovascularsonata.org/?p=47

I was asleep, it being 2 hours earlier out here than in New York's time zone.

Within half an hour of the event, though, my Mom called and said that I needed to get up and turn on the TV, that a plane (or maybe this was after the second one) had hit the WTC. I forget if she used the word terrorism.

So I was up before the towers fell and saw the rest of it.

I remember the next day having some of my siblings over to watch a movie and they sent me out for pizza, and at the pizza place it was like everybody was well like cousins or, friendly neighbors, or even one's family; there was this feeling of oneness that I remember.

We lived right under the approach path for planes coming in from the south (or taking off to the south, depending on the winds, but more often than not they land from the south) to SLC Int'l airport, and it was really wierd to not have the planes going overhead basically constantly almost. The silence was eerie.

And of course after a day or two there was all sorts of stuff going on in SLC to ramp up security for the 2002 Olympics. Seeing armed military patrols patrolling the streets of your home is just wierd.

During the world trade center attacks I was deep into treatment for my depression and it affected me a lot. I really felt the pain of those affected as if it were my own.