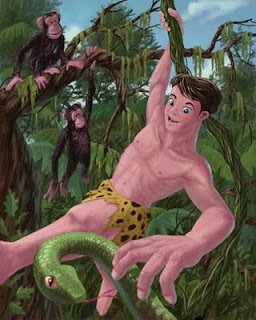 In Tarzan of the Apes, written a hundred years ago, the protagonist is born to a couple cast up on the coast of Africa by a shipwreck. His parents die, and he is brought up by a female ape, Kala, who had lost her baby. He learns English, but not its pronunciation, by looking at the picture books his parents saved from the wreck. Tarzan develops the physical abilities of a jungle denizen, but also shows a remarkable intelligence and nobility of spirit. This is, as we learn, because his father was an English lord, and Tarzan is thus the true heir to the title Viscount Greystoke (I will add that Jane is from Baltimore).
We today know that the human personality would not develop as Edgar Rice Burroughs supposes it could. Nobility of character certainly does not come from an ancestral title. The brain requires certain input to develop normally. In understanding the mind, however, we can use the computer as an imprecise analogy.
The computer as delivered, like the baby, contains hardware. The baby has the ability to use certain software: It starts to learn language. Unlike a computer, however, it develops connections to its caretakers. New languages can be learned later, new habits or customs, but the oldest language and culture often has attributes that stay with the individual, even if in the background, throughout life.
Recent studies have started to explore the origins of the sense of morality, fairness, and sharing in chimpanzees and other primates. Certain traits that were assumed to be totally learned are now thought to be somewhat hardwired. The differentiation between hardware and software is not as clear-cut as was once thought, but it is still useful. Psychiatrists treat the whole person: There are difficulties that arise primarily from hardware not functioning perfectly, others purely from software or programming, many from both ("nature and nurture"). At one time schizophrenia was thought by some to come from a baby's experiences with a "schizophrenogenic mother." Not any more. We don't know the precise origin of many conditions we treat.
A child is born with a temperament that is evident at a very early age. Traits as diverse as confidence, distrust and shyness may show up very early. Some babies have a sunny disposition, others are more negative.
Just as on the computer, certain programs may have conflicts with others. While we may steer the ship, the conscience may control the compass, and our drives affect the winds and tides. Loyalty to one’s family may conflict with duty to one’s country (Antigone), or the wish to be independent may clash with the wish to be cared for. Some conflicts may be primarily behind the scenes, perhaps more obvious to others than to ourselves. Anxiety may be an outcome of our conflicts.
Free Will (see Noni Mausa’s comment in Are We Not Thugs?) is not as obvious a concept as it once was thought to be. Decisions are not completely determined by that with which we are consciously aware. The law needs to have one concept of free will and causality, religion has another, depth psychology another yet.
What we think and feel about others is not determined simply by what happens between them and us. Our reactions are influenced by multiple layers of past experiences, prejudices, our competitive and even sadistic yearnings, the need to be loved and to love, and factors that might be trivial to one person but determinative to another. It is not at all easy to be aware of what leads us to do what we do.
A new test had been done which would establish the truth about Tarzan’s parentage; the results in a telegram that had come from Paris. Tarzan knows that Jane Porter is loved by William Clayton, who had inherited the estates and title that might be rightfully his. He hopes that Jane loves him, but before he could speak with her, in a moment of doubt and insecurity, she promised her hand to Clayton, choosing the certain over the uncertain, respectability over passion. What interfered with his ability to see that Jane loved him, and to act sooner?
He reads the telegram. “Fingerprints prove you Greystoke. Congratulations.” One word from Tarzan would take everything from Clayton, and so now from Jane.
Of what use is a peerage if we have lost her whom we love? Could our actions be influenced by the fear we had when our father died?
Clayton asks Tarzan what he knows of his origins. Tarzan crumples the telegram and throws it aside. He answers simply, “My mother was an Ape. I never knew who my father was.”
Posted by Dinah on Friday, June 24, 2011

Rob, I agree with you.

I like the story here. But nothing is terribly controversial, unless you put Tarzan in seclusion and give him antipsychotics.

Consider this a nice moment of peace for Shrink Rap and we can all hang out gently in the jungle together.

This old world monkey might do it for you:
http://en.wikipedia.org/wiki/Rhesus_macaque

Read and re-read Tarzan of the Apes as a child. Fascinated in particular by the mistaken identity due to language aspects. Tarzan could speak French (taught by a Frenchman) and read English (self- taught from books in the hut his parents lived in with him as an infant before their death and the "swap"). Jane was in love with a wild man and she thought Tarzan could not have written a note to her in English.

Of course, Tarzan also spoke "ape". In my spotty memory, the third book, Son of Tarzan, took this farther as Tarzan and Jane settle in Baltimore and have a male child who in Lamarckian fashion one evening sneaks out to the (forbidden lest it spark some inherited quality!) circus and ends up stowing away to Africa with an old (captured) ape friend of his father and has his own wild adventure.

Thanks for the opportunity to not use my shrink-power to attempt to understand fully the delights of childhood imagination.

It was a really nicely written piece that I enjoyed reading. Thanks. I had forgotten or never knew the story.

Jesse, do you have a blog?