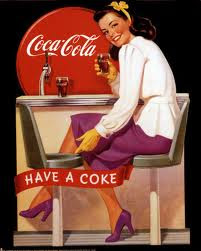 Thank you all so much for your feedback on our survey. I'm still thinking about it, but your suggestions have been excellent!

Please join our Facebook page. Again. I'm taking down the original as I didn't realize when I put it up that it would be one more thing to check and maintain and "Shrink Rap" has been a lousy Facebook friend without reciprocating. Roy put up another page, and his twitter feed populates it so that something actually happens-- on a good day, it announces new blog posts, on a bad day, Roy tweets out funny little incomprehensible tidbits. We're our own fans, so we can post to the wall, and there are some pics of real people. And the duck is there. Our page URL is: http://www.facebook.com/shrinkrapbook
Some day, we'll get it right.

We have a new post up on our Psychology Today blog. A bit more of the same, but check it out if you can stand it.

Okay, so here's the real post in honor of ClinkShrink, our caffeine addict.
It's a century since Coca-Cola went on trial for sticking that caffeine stuff in their drink. 80mg, back then. There was a trial, there was research, and here's the article in today's New York Times: A Century Later, Jury's Still Out on Caffeine Limits and Murray Carpenter writes:

Coca-Cola hired a Barnard College psychology instructor named Harry Levi Hollingworth. He mustered 16 subjects aged 19 to 39, including occasional, moderate and regular caffeine users, along with abstainers. In a Manhattan apartment rented for the research, he tested their mental and motor skills under varying levels of caffeine use and abstinence. They took caffeine capsules and placebos — double blinded, so neither they nor the researcher knew which was which — and “soda fountain” drinks with and without caffeine. The trial looming, Hollingworth did it all in just 40 days.

The subjects kept good notes. On Feb. 22, a regular user was caffeine-free: “Felt like a ‘bone head’ all day. My head was dull more than usual.” On Feb. 25, an abstainer was dosed with four grains of caffeine (260 milligrams, the approximate equivalent of a 12-ounce cup of Starbucks coffee): “Gradual rise of spirits till 4:00. Then a period of exuberance, of good feeling. Fanciful ideas rampant.”

Hollingworth found that moderate doses of caffeine stimulated his subjects’ performance on an array of tests, though some slept poorly after the highest doses. His appearance on March 27, 1911, was a high point in a four-week trial dominated by anecdotal, contradictory or sloppy testimony.

The point of the article? 100 years later and we're still asking all the same questions. Go figure.
Posted by Dinah on Monday, March 28, 2011

Funny, I was just pondering caffeine this morning on my drive to work. Seems like my clinic is run on coffee, and I sometimes wonder if it takes caffeine to even stay energized enough to be vibrant through the work day. I don't drink it much myself because I crash like crazy after a few hours, but then I walk around all tired while everyone is buzzing around getting more done until around 11am.

Oh was this about caffeine? I thought it was an ad.

I'm a huge fan of "mild to moderate" use of caffeine, for those who tolerate it (me!). That's my stance, and I'm sticking to it (with espresso in hand).

Caffeine? Yes, but the original ingredients in Coca Cola included cocaine. That's why it's "Coca" Cola (go google it). So while we are getting our fill of caffeine today, America's favorite soft drink was once much more potent.

Totally off the point of the Caffeine part, but I feel like for me there may be some stigma attached to liking you guys on facebook, since I don't 'like' anything else related to psychiatry.

I'm sure there are people who 'facestalk' and wonder. I'm not one of them - I have better things to do with my time.

I'm a huge fan of "mild to moderate" use of caffeine, for those who tolerate it (me!). That's my stance, and I'm sticking to it (with espresso in hand).