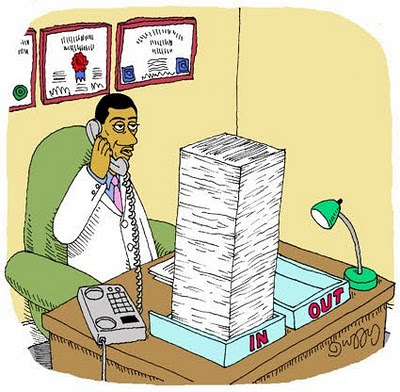 Thanks to Kery for heads up.
Illustration by J.C. Duffy / copyright © 2010 by the American College of Physicians

The American Medical Association had a press release on November 22nd and announced findings from their survey on the impact of insurance company preauthorization policies. Surprisingly, they discovered that these policies use physician time and delay treatment. It's funny, because preauthorization policies were designed to save money. And I imagine they do, for the insurer, but they cost money for everyone else.

Chicago – Policies that require physicians to ask permission from a patient's insurance company before performing a treatment negatively impact patient care, according to a new survey released today by the American Medical Association (AMA). This is the first national physician survey by the AMA to quantify the burden of insurers' preauthorization requirements for a growing list of routine tests, procedures and drugs.

The AMA survey of approximately 2,400 physicians indicates that health insurer requirements to preauthorize care has delayed or interrupted patient care, consumed significant amounts of time, and complicated medical decisions. Highlights from the AMA survey include:

It's not us physicians who wait, it's the patients. AMA's complaining about this won't work. EMR's in the cloud might help: The patient could just grant the payer access to the record online, provided the physician adequately documents what the payer wants to know. Medco's online preauth sure beats the phone call. The real problem is with a denial. Unless you have already discussed the cheaper (covered, affordable) alternative with the patient you need another office/phone/video-conference contact to educate the patient. I charge the patient a $50 fee for preauth. Payers don't care what AMA thinks, but maybe they will respond to patient complaints. I refuse to raise my fees to patients who pay cash to pay for my time to save payers money.

This SUCKS. (not the post, you know what I mean!)

I mean, your post doesn't suck, the hassle/system sucks.

@ moviedoc...having been on two sides of the equation, as a patient and as a biller and authorization "specialist", I can tell you, the payer doesn't care what the patient thinks either. Complaints are met with longer delays, denials, circular talk, and down right rudeness, in any and all possible combination. It is really quite infuriating.

Several years ago I had gone to the pharmacy to pickup a new epipen to have on hand for my bee sting allergy. It wasn't covered. When I called the insurance to complain I was told that it wasn't medically necessary (!), that were I to be stung and have a reaction the ambulance, ER visit, and possible admission would all be covered in full, but not the epipen. Since the costs involved are dramatically different, the only reason I could think of for the insurance to have this policy in place, was that they (the powers that be) hoped that between being stung and the arrival of an ambulance, the person would die, leaving the insurance nothing to pay for! When I said this to the person at the insurance company (a supervisor), he said "that would be most cost effective". Sadly, I'm sure this is not all that unusual.

Battle Weary, they actually SAID that? oh my gosh.

I worked at a health insurance company for three years, and I had to process the "red files", the files that came out of the weekly medical underwriting committee that they had a doctor come in for and they all went through problem cases that were really expensive and then decided what to do about; the red files ended up one of three results I had to proces - putting a rider on the policy that would exclude the particular expensive condition, rescissions, which rescinded the persons policy altogether, and suspensions, suspending the persons coverage either temporarily or for a specific period of time I can't remember which. Many of these were investigated and caused by pre-existing rules at the time which allowed alot more of this nasty stuff to be done by insurance companies than can be done now, although pre-existing condition rules aren't exactly a non-issue anymore, I know a couple years after I stopped working there major laws were passed that seriously limited alot of what went on. Anyway, it disgusted me what I was doing, but it was a job. I didn't make the decisions, I just processed the files; I also on my own came up with some word processing programming to make the process more efficient, programming macros that doubled or tripled the speed I could do them at. I felt so bad for the people the files represented; I always wondered if anyone else, on that Underwriting Committee, ever saw the files as people. I guessed that they did not, really, or it'd make their job alot harder. I also knew, though, that if I quit my job someone else would be doing it, and it paid really well. So I kept at it until my mental health problems started the cascade of events that led to my starting to not be able to hold jobs. This job was the one I was able to hold the longest, working for two department heads, the position just below VP, and sometimes working for the Underwriting VP as well.

Anyway. I gravitated towards the people who seemed to have a heart at that company, which were few. So many were cold and hard, which, given the decisions they made about people, I guess made sense . . . . this job was about 20 years ago. The best thing to have come out of it is that I "know" insurance-speak, which has helped me in dealing with all my medical and mental health insurance issues mightily, where otherwise I'd normally be anxiety-disordered to death about dealing with something I didn't know about.

It was interesting,Thanks for the nice work.

Please note the following credit line should accompany the cartoon: "Illustration by J.C. Duffy / copyright © 2010 by the American College of Physicians"