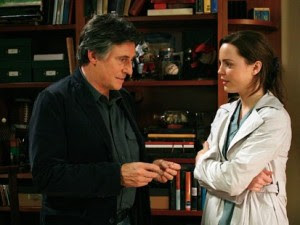 Sunil doesn't come for his scheduled session. Instead, we get Frances.

Frances continues to struggle with her relationships with her teenage daughter, Izzy, and her terminally ill sister, Patricia. She now has to balance Izzy's wish to prolong Patricia's life with Patricia's wish to die peacefully at home. Should she "pull the plug?" She tells Paul how special it was when Patricia said she loved her, and how she feels like she'll be left alone with no one. Does Paul know how that feels. Indeed, he does.

The session bounces back to how sister Patricia was Paul's patient years ago. As she leaves, Frances asks, "Were you in love with her?" Please, Paul, just say no, she was a patient, her sister is now a patient, why would you have been in love with her and if you were, why would you have ever agreed to treat her sister, much less admit you had such feelings. Therapists don't owe their patients the right to every inner thought. Paul doesn't really answer, he just says that he cared about her a lot, an acceptable feeling to have for a patient.
Posted by Dinah on Monday, December 06, 2010

I can understand that therapists don't owe their patients every inner thought, especially if or when a patient asks questions, further, especially, PERSONAL ones like that.

At the same time, with the recent discussion about is it ok to lie to a patient to keep their business, in that case it was about religion, but the overall thing was about lying (well, to keep business), it just struck me, the whole, introducing lies into the therapeutic relationship. IF, in fact, he WAS in love with her, and you were hoping he'd deny that he'd been even if he had been, since patients really are NOT entitled to their therapists' every inner thought, especially if they are going to start playing 20 questions with their personal lives like that; they could hit on any number of sensitive issues, that the therapist, if not wanting to lie in response, would be put in an awkward position.

So, then, to preserve a personal boundary, lying to the patient then is alright? It seems to me it may even be necessary, on occasion, depending on what potentially gets asked. Of course, ethical therapists wouldn't treat the sibling of a patient they'd previously fallen in love with (I suppose falling in love with a patient can happen accidentally to even the most ethical of practitioners, let's say, in this scenario). Still, there might be other things that a patient might blurt out as a question that could get sticky.

I'd think a polite but firm statement about boundary issues might be in order or saying something about why one doesn't answer such things (unless that seems too defensive or evasive) . . . or then there's the option to just . . . lie, depending on what is being asked. I'm not imagining a whole ton of things, the examples coming to mind right now are such obvious boundary violations that they could easily be dealt with by discussing that they ARE boundary violations . . .

Well, I take that back, a little. Just because a question is a boundary violation, doesnt mean telling the client that it is, will completely deal with it. I just thought of one that might not be so easily swept away. What if the client asks, "Have you ever had any sexual thoughts about me?"

Talk about boundary violations, lol! Thing is, it probably needs to be explored as to WHY the client is asking that, anyway, but that aside, just brushing it off as being too personal a question heck with this kind of question that might make the client asking this think, "oHO, he/she HAS had thoughts, and is evading answering directly!" even if they haven't, and aren't trying to for the reasons the client thinks . . . you know?

So THAT's what I mean when I say it might be even NECESSARY at some point, for a lie, depending on what is being asked. A simple, "No", would solve this question nicely, wouldn't it, regardless of whether or not the therapists' mind had ever wandered and they may or may not have had a few stray thoughts that would make this statement a lie.

If therapist has had sexual feeling toward patient and has not actted on them then it would be very therapisty to say no and justify that in their own mind by saying, any feelings in therapy are tranference or counter-t and do not refelct actual feelings about the person sitting there. Um, I don't always beleive that is the case but it could be and that is good enough to be able to say no and examine what these feelings really stem from. If they stem from patient dressign in an obviously provocative way then the real issue is why is the patient coming to therapy dressed that way. So yeah, put it back on the patient if it belongs there and if it belongs to the therapist, that is theirs to deal with and it is fine to say no even if it is a lie because think about this: you have a kid whose teacher has sexual feelings towards said kid. What would you rather, that teacher stated they did or stated, of course not. Now assuming the person in therapy is not a kid, same idea still apllies. There is a duty of care owed to the patient or the student in either case and what the therapist feels or does not is sometimes better left unsaid. That is not the same as lying to a patient and saying I am a devout Christian if they are an atheist just to keep your business.
Believe me, nobody really wants ot know every thought that goes through the therapist's head about them and any therapist who shares it all whether willingly, or of asked, is in for trouble on many fronts. You also don't want to know every thought your best friend has had about you and a therapist is not yoru friend.
L.S.D.

I don't necessarily agree that the two situations, teacher/kid and therapist/non-kid patient, are comparable enough scenarios, but that aside, I basically agree(d) with you in saying that the therapist may need to say what will best take care of the question, depending on what is being asked.

As well, the specific question I came up with, was only on example; there's all sorts of questions and types of questions a client might ask a therapist, although this one sprang up as the most outrageous I could think of, not that I thought of it quickly. I've not wondered it about my therapist.

I don't disagree with anything you said and I came up with the teacher bit because my kids have teachers/profs who, while not therapists, are bound by professional codes of ethics that are not so dissimilar to what therapists are bound by. I think the teacher can share all sorts of stuff that maybe would be a bit much if a therapist did it, as in yes sure bring your kid with you to class and have them sit at the back because you couldn't find a sitter but when it comes to significant boundaries, if you teach any of my kids, watch out. I suppose it came to mind because teachers and therapists (all docs for that matter) are both trusted with vulnerable populations, and we often hear of it in the news when they violate that trust.

Hey Dinah - that photo is of Laura not Francis. Did you think we wouldn't notice? Do you miss the misdeeds of Paul's work with Laura? Aren't you glad this show may be put to rest for good now? But I'm glad you wrote about it. I enjoyed your point of view. Thank goodness fictional Paul closes his doors.

Oops on the pic. I look at them in little versions and as I put it up I realized it was the wrong person.

Still not as bad as the time I didn't realize I'd stuck up a pic of a naked guy. That one I took down.