More on the Red Book 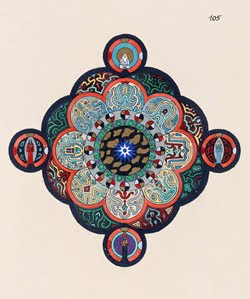 I got my wish; I got to read the rest of the NYTimes Magazine article, "The Holy Grail of the Unconsious" by Sara Corbett about Carl Jung, on the patio with coffee, a bagel and lox, on a gorgeous Sunday.

The article left me thinking-- perhaps it left me longing-- and maybe this will be more of a journal entry then of a blog post. You'll forgive me for being a bit raw.

I read the article and I was drawn in-- I want to read the Red Book-- the soon to be published work of Jung about his own exploration of his unconscious. Much of Jung's journey occured during a difficult period in his life, and Corbett writes:

Whatever the case, in 1913, Jung, who was then 38, got lost in the soup of his own psyche. He was haunted by troubling visions and heard inner voices. Grappling with the horror of some of what he saw, he worried in moments that he was, in his own words, “menaced by a psychosis” or “doing a schizophrenia.”He later would compare this period of his life — this “confrontation with the unconscious,” as he called it — to a mescaline experiment. He described his visions as coming in an “incessant stream.” He likened them to rocks falling on his head, to thunderstorms, to molten lava. “I often had to cling to the table,” he recalled, “so as not to fall apart.”

I wonder, if I read this will I just dismiss Jung's words as products of an illness, not worth analysis in their own right? Humanity has had a complicated relationship with the ideas of people suffering from mental illness (and it sounds like Jung was indeed tormented)...sometimes they are revered as holy, sometimes they are dismissed as disorganized, other times they are seen as evil. My best guess is that I will feel the Red Book is over my head, too philosophical, too complex for me to understand. The book can be pre-ordered from Amazon, and for $105, well, I'm thinking about it. I'm thinking, too, about visiting The Rubin Museum to see the exhibition with the original Red Book.

But I know very little about Jung, and it's not Jung, or even the Red Book, that really grabbed me about this article. The story included the stories of some people, one of them Dr. Stephen Martin, a Jungian analyst and founder of the Philomen foundation. Dr. Martin has one of Jung's hankerchief's framed in his office. He's devoted himself to Jung, he believes in him with all his heart. Corbet writes:

Just as I had, Stephen Martin flew to Zurich the week the Red Book was taken from its bank-vault home and moved to a small photo studio near the opera house to be scanned, page by page, for publication. (A separate English translation along with Shamdasani’s introduction and footnotes will be included at the back of the book.) Martin already made a habit of visiting Zurich a few times a year for “bratwurst and renewal” and to attend to Philemon Foundation business. My first morning there, we walked around the older parts of Zurich, before going to see the book. Zurich made Martin nostalgic. It was here that he met his wife, Charlotte, and here that he developed the almost equally important relationship with his analyst, Frey-Rohn, carrying himself and his dreams to her office two or three times weekly for several years.

People are searchers, some more than others. Some people are content as is, they look for nothing. Others scour their worlds, looking. Looking for what? I suppose it depends on the individual and I suppose that many who search have no idea what it is they are looking for.

So there is a piece of me that's jealous of Stephen Martin, without ever having met him, without knowing a thing about him (except for these excerpts in the NYT magazine). Why? I suppose because he seems to be someone who is able to believe in something so strongly, so wholly, and with such devotion. I imagine someone who devotes themselves to a cause and a belief with such certainty and reverence, feel sure that Jung had the answers. In Corbett's article, he likens his devotion to a religion, and it's hard for me to imagine ever believing that another human being has something worthy of this kind of worship--if that's the right word. I think I'm jealous of what Dr. Martin believes he has found-- whether it's right or not, he still has the ability to believe so completely in the rightness of someone and something, and presumably it's because Jung gave him something he's found worth having.

Jung is not what I've been looking for. I might might read about his journey, or I might want the book just to have it, because some things are worth having just to be had, even if I never read it, even if I never open it. And maybe Dr. Martin is just one more tormented soul, but for today-- a day which started with a bagel and lox and an absolutely gorgeous morning-- I wanted him to be someone who searched and found what ever it was he was looking for.
Posted by Dinah on Sunday, September 20, 2009

The book never would have been written today. He'd have been shoved into the hospital and force-fed psych drugs.

Sunny CA: probably. The book has been closely guarded by family and only read by a handful of people in what sounds like a 4 decades-long decision to publish or not. I guess once we read it, we'll have a better idea if he should have been "shoved into the hospital and force-fed psych drugs." I guess my only gripe with your comment is the assumption that he would not have taken the meds voluntarily--- seems to me people Want their suffering to end and are often eager to take their meds, so it's jumping the gun to assume that Jung would have been an involuntary patient. I, personally, have not had an opportunity to ask him lately.

Well, I was one of the ones who had groups of 5-6 aides tackle me and inject me, so it colors my opinion. I find it hard to believe a psych ward would actually allow a patient to stay psychic even when the patient expressed the desire not to take the meds, which I did.

I meant psychotic not psychic, but perhaps when we read Jung it will seem psychic as well.

(I don't seem to be able to get on my Google account.)

"I wonder, if I read this will I just dismiss Jung's words as products of an illness, not worth analysis in their own right?"

This is something that scares me. There seems to be something inside our nature to reject, write-off, and treat, people and topics that cause discomfort.

"seems to me people Want their suffering to end" ... that's optimistic, and generally true, however, when is it an alleviation of suffering, and a prevention of growth?

Does moving forward, adapting, growing, exploring physical, spiritual, emotional and mental grounds need to be a painless process, or is pain and suffering sometimes a motivator?

Do we sometimes cheat ourselves out of opportunities for growth by soothing too soon, not facing the dark recesses of the mind?

Should words and our beliefs depend on our judgement of sanity?

I actually don't think much of Jung, after having read one woman's blog who is a Jungian psychiatrist or psychologist or whatever, although I do like the way she writes.

I just find some of her views on mental health treatment and some related issues to be quite unpalatable, when considering that she actually treats people, with said philosophies and unpalatable opinions, quirks, what-have-you, sure to affect any patients of course.

Not that I know whether or not all that I mislike about her opinions is from Jung or not, but some of it is.

you should read this