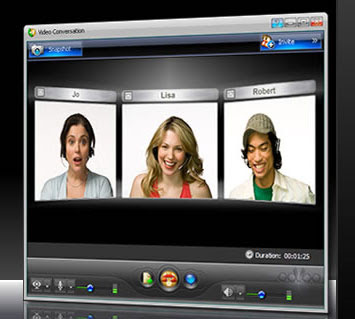 I'm working on a way to make this post about psychiatry. Sort of getting there.
In today's NY Times Magazine, Peggy Orenstein notes in "The Way We Live Now--The Overextended Family," that she doesn't want to Skype videochat with her parents. Too much intrusion, there need to be some boundaries. Orenstein likes sending digital pictures, she doesn't like email. And somehow, she's aware that while she's not sure she wants to videochat with her folks, she recognizes that she might want to chat with her kids.

To Skype or not to Skype, that is the question. But answering it invokes a larger conundrum: how to perform triage on the communication technologies that seem to multiply like Tribbles — instant messaging, texting, cellphones, softphones, iChat, Facebook, MySpace, Twitter; how to distinguish among those that will truly enhance intimacy, those that result in T.M.I. and those that, though pitching greater connectedness, in fact further disconnect us from the people we love.

She goes on to write:

Video chat, while obviously cheaper, would seem to have the same skewed ratio: too much access, too little control. But that’s speaking from the standpoint of a daughter. My perspective shifts significantly — as it does on so many subjects — when I mull this one over as a mother. It’s one thing to consider how much about me my parents have a right to know; it’s another to contemplate how much about my daughter I have a right to know — or even want to know.

I suppose the article caught my attention because I have a couple of those teenager people. One goes to college a half a country away, and when I suggested we videochat, I was told he doesn't do that. He'll email, he'll talk (actually, it's more grunting), and the most reliable form of communication is the text message, but he's not interested in IM-ing me, videochatting, or being my friend on Facebook. He doesn't follow me on twitter, and somehow I doubt he reads Shrink Rap.

Email ThisBlogThis!Share to TwitterShare to FacebookShare to Pinterest
Labels: technology

A timely post. Our family has tried most of the above. I used the Mac video chats from when they first came out to stay in touch with my sick parents in England, and it was a Godsend. I could see when it was time for a visit. And they got a real charge out of seeing the kids regularly, who would show off costumes, the cat dressed up, a birthday cake they had decorated for m e, elaborate sculptures, etc. I used to chat w my far away siblings also, tho less often.
Since my parents died a couple of years ago, video chat has been less appealing. My daughters will take Skype calls from me about 50% of the time. When a sibling was having a tough time I left the SKype on, and she would constantly call, and I would never have the heart not to answer. It felt invasive at times.
Don't like IMs, because of feeling obliged to be social when I go online for research or something else to do.
The cellphone is good, because I am at work or out of the house so often (with every call on the work phone, email and internet site recorded by the employer) but we are not allowed to make or receive personal calls. I text furtively, when arranging family logistics. This is extremely stressful ( eg: when kid's shrink FINALLY calls me back after days of phone tag, and I am trying to race CASUALLY to the stairwell to talk about the kid without my boss seeing).
Not interested in Twitter.
My group of female friends at church are all on Facebook, but I find it only occasionally useful. It seems just as easy to do a mass emailing "Help, can you cover my class, as we are all violently ill today..." as to post it to Facebook. It's fun to share photos, but there are other, somewhat more secure, ways to do that.
Emails and the blog and texts are my now-preferred mode of communication. I never liked phone calls except when I was young and in love. These days, phone calls are usually something dreadful like the kid's social worker or doctor or teacher "concerned" about something. Or arguing with an insurance company that is refusing to cover yet another needed psychiatric treatment for somebody in the family...
I think that most of the short and snappy "young" modes of communication are very shallow and actually serve to diminish intimacy. I have hundreds of acquaintances in real life, but each in different contexts, so I wouldn't want to broadcast twitters or facebooks "I am..." about important things. And few of them would be remotely interested in my blog. It seems that a lot of the newer methods of communication are about the presentation of self in sound bites, to impress, amuse, and express dominance or mutual emotion as in OMG, can you believe Michael Jackson died??? Froth.
Of course, I'm a verbose geeky intellectual, stressed to the gills, not a chilling kid.... I'd rather receive one thoughtful letter or email or posted comment than a hundred ""You go girls!"

On the other hand, when one is struggling thru family crises over a college kid's choices and opinions, text messages are a great way to maintain at least some cheerful and loving connection, without veering into election politics or that proposed trip alone with the boyfriend or some other thing liable to provoke heated words...

There is something inherently related to psychiatry whenever one speaks about communication. It has to do with being connected, and thus, feeling less socially isolated... Social isolation is never good - for patients, shrinks, or therapy ducks.

I would have enjoyed video chats with my parents, but they were very old when the internet was developed and refused my offer to set them up. In general, when I answer the phone, I don't want the caller to see what I am wearing and the lack of neatness of my house. If I set up video chat I'd reposition my computer table with my back to a wall. I am glad this is not widespread. I find the proliferation of ways to communicate close to overwhelming. I learned to email but I refuse to text (no kids!) and I have avoided social networking sites. I'm also avoiding Twitter. I think in a number of years all these technologies will shake down and we will be communicating differently. I don't feel like chasing it from one thing to the next.

i'm not certian this exactly ties in with the topic, however, i gave my mom permission to speak with my psychiatrist, by phone, and ended up using most of the next appointment correcting the misinformation she believed about me...in a way, i guess it was good...because now i need to talk to h e r about various misbeliefs ...eep.