For new readers, it's a ClinkShrink tradition to report on the annual American Academy of Psychiatry and Law conference, which is being hosted in Seattle this year.

Today was the first day of the conference. It began with an excellent keynote address by AAPL president Dr. Jeffrey Janofsky, who talked about reducing inpatient suicides. He presented the result of an interesting quality assurance study done at Johns Hopkins Hospital which applied the principles of "failure mode and effects analysis" (FMEA) to the problem of inpatient suicide. He found that there were over 40 potential failure points with 90 possible causes, all of which could lead to a completed suicide. FMEA is a process developed for use in manufacturing but which is more recently being applied to hospital-based medical errors.

From there I went to a debate over the treatment of Dangerous Seriously Personality Disordered offenders (DSPD), people committed indefinitely for treatment under Britain's DPSD act. There was some debate over whether or not the costs of confinement outweighed any potential benefit, but almost no practical discussion of whether or not the treatment actually benefitted the offenders which I think is a more relevant issue. The more interesting point that came out was a discussion of Hollands TBS sentencing system. This allows judge, at the time of sentencing, to determine a proportional amount of criminal responsibility for an offense and to assign the offender to either a hospital or a prison for the amount of time proportional to that responsibility. In other words, if you're found 60% responsible and 40% impaired you'd spend about half your time in a treatment facility until you 'earn' your way out to a prison. It's an interesting idea. It has reduced recidivism from almost 50% to around 17%.

In the afternoon I attended the obligatory serial killer talk. There has to be one at every meeting. In my early forensic days these were the talks you looked forward to because they were the most intriguing. Now after several years of forensic work I find them mostly very speculative and theoretical. The only data-based statement I heard was that about a quarter of all sadistic serial killers were also masochists. I heard a lot of psychoanalytic speculation. Too much speculation. The only definitive thing I came away with was the knowledge that the BTK killer looked lousy in women's lingerie.

The best presentation was given by members of the American Academy of Forensic Sciences. I try to make their presentations every year because they've uniformly been fascinating. This year's presentation was about arson investigation and how electrical causes of fires leave certain predictable traces. It was great. Then the president of the AAFS, an attorney, gave a presentation about how lawyers use the Internet to investigate expert witnesses. That was great too. She gave a run-down of common Internet diploma mills and talked about the infamous case of the famous hypnotherapy expert witness, Dr. Zoe Katze. If you haven't read this, it's worth a trip to follow the link. And here I spent all that money getting re-credentialled in forensic psychiatry.

So that's how I spent my day. There were loads of poster presentations I'm not going to review here, because frankly a lot of them weren't that great. I'm getting picky in my old age when it comes to conference material.

Oh yeah, I'm on the 46th floor of a 47 floor hotel. The view is terrific, but not quite as good as the view from the top of Seneca Rocks: 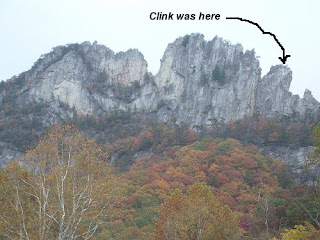 Click here to see what ClinkShrink learns in Part 2.
Posted by ClinkShrink on Thursday, October 23, 2008

Sounds like an interesting conference. Hope you're enjoying your time in Seattle and getting out in the afternoons to enjoy the sunshine. I've lived here since 1994.

I wonder if Zoe D. Katze will be voting this year?

That was a great article, btw. On another psychiatrist's blog, Google regularly inserts an ad that reads:

Be a Psychiatrist
Advance your career - earn a degree in Psychiatry completely online.

I clicked to see what was involved (I mean, who wouldn't want to forgo $250k in student loan debt and and 7-8 years more education if there was an easier way to accomplish your goal?)

Unfortunately, it turns out you can only acquire psychology degrees this way. So no prescription pad. Darn.

Seriously, I'm curious about the decreased recidivism rate for people who spend part of their sentence in a hospital, then "earn" their way to prison. Why does this work so much better? Are mentally ill offenders in the U.S. sent directly to prison now? I thought we had forensic hospitals, too.

Anon: I like Seattle although I've barely had a chance to leave the hotel yet this week.

Anon #2: They really didn't go into details about the Holland system, but they did imply it was much looser than the U.S. Offenders are allowed to live communally and to do their own cooking---very different. I suspect there's something qualitatively different about the offenders they're managing this way. In the US mentally ill offenders are generally sent directly to prison if they are found criminally responsible, except for those states that allow for GBMI verdicts (guilty but mentally ill) which requires hospitalization prior to incarceration. I believe this is what Montana does.

Where can I find more info on the study about reducing inpatient suicides? I'd like to know more.

As a follow-up, it would be interesting to learn if there's any difference in outcome or recidivism for patient-offenders who are declared GBMI and get hospital treatment prior to prison.

As a Clinkshrink, how well do you think the mental health needs of your patients are served by the prison system? Do they receive any kind of treatment beyond medication and brief therapy? Are they segregated from the general population, or does this vary, or are they all in gen pop?

Enjoy the rest of your conference!

Anon: The outcome study for the FMEA analysis hasn't been done yet. They've identified failure points and set up interventions but they haven't gathered followup data. Part of the problem in doing outcome studies here is the low base-rate issue. Inpatient suicides are quite rare so it's hard to measure the effects of intervention.

Regarding GBMI recidivism, insanity acquittees as a whole recidivate less than 'traditional' offenders. Don't have exact numbers off the top of my head (except for about 60-70% recidivism for parolees).

Regarding the housing status of my patients in prison, the majority of them are in general population.

Nurse: Thanks, so far it's been fun.

Well..there are links between having pets and psychological wellbeing...maybe ZD Katze is just carrying this to extremes :-)~