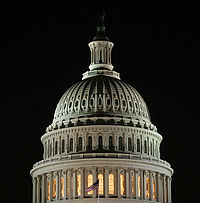 Two days ago, I got an email from one of those psychiatric organizations I belong to. The Senate would be voting on the Wellstone Mental Health Parity bill. Huh, I thought, isn't the country in a financial crisis, isn't the Senate supposed to be addressing the issue of whether to 'bail out' the disaster on Wall Street? Some 700 billion dollar problem? Mental health parity is nice, but why on this particular day.

In the middle of the day, I got a romantic text message from hubby: The Senate is rolling mental health parity snuck into the bailout package.

For those Health Blog readers who didn’t manage to read every line of the ballyhooed bailout bill the Senate passed last night, allow us to direct your attention to page 310 (Title V, Subtitle B), home to the “Paul Wellstone and Pete Domenici Mental Health Parity and Addiction Equity Act of 2008.”

What’s a mental health bill doing in a piece of legislation designed to grease the gears of global finance? Turns out, it’s just a bit of Congressional housekeeping.

The Senate and the House both passed the mental health bill last week. The bill requires mid-sized and large businesses that offer mental health coverage to provide benefits that are comparable to the benefits provided for physical ailments. It was a compromise years in the making, and drew broad support.

The bill passed the House as a standalone measure but was folded in with other legislation in the Senate; in order to send the bill off to the President (who supports the bill), both houses have to pass it in identical form.

Enter the bailout bill. It could be the last major piece of legislation passed by Congress this year, the AP says. And it gives Congress a chance to get the mental health parity bill on the President’s desk to be signed into law — provided the House of Representatives passes the bailout bill this time around. House leaders are cautiously optimistic that the bill will go through, but they’re not making any promises, the WSJ reports.

Sen. Ted Kennedy, who has worked on mental health parity for a decade, was the lone senator not to cast a vote on the bailout legislation. He missed it due to his continuing battle with brain cancer.

I was shocked wearlier today when I read yet another article about this strange situation. What it points up to me is that Congress is a corrupt as Wall Street. Congress is so used to padding bills and special interest add-ons don't blink.

I just saw this in the morning paper. Do the folks who inserted this add-on think the rest of the legislators won't notice?

A local non-profit here in North Texas is of the opinion the mental parity bill will cause employers to drop all mental health coverage because of the added expense, partly because the bill contains language requiring coverage until the patient is "healed".

that, and about 3,567,438 other bits of legislation were passed in the bailout bill. they had to make sure it got passed so they threw every dog a bone. there is a tax exemption for wooden arrows now. the bailout won't really solve anything but at least you've got mental health parity. he never even saw it coming. pity,'twas.

It may be strangely fitting inasmuch as one of the (questionable) arguments against both the bailout and parity (which otherwise of course would seem to have nothing in common) has been moral hazard. As regards Wall Street, the concern was that the bailout would only encourage risky investing; in the case of parity, the concern was that more generous coverage would lead people to seek psychotherapy or other mental health services that aren't really necessary.

In both cases, there may be a smidgeon of truth in the abstract, but practically speaking the great majority of people will end up doing better if they don't go down in financial flames on the one hand or have access to care on the other.

Plenty of people are going to go down in financial flames with or without the bailout bill, and perhaps that will result in an increase in the number of visits to mental health professionals, more diagnoses of everything will be made and the drug companies will do well. Invest in big pharma, otherwise keep your money under the mattress. I believe that they have a mental health term for that. Compulsive hoarding? OTOH, the mattress savings plan has worked well for me for over a year.But damn, I am going to go buy some stock in a drug co.

I hope all the people knocking it are paying 80% of the cost of any psychological/medical care they receive in addition to health insurance costs. Or that they aren't too wealthy to experience a difference. Have a little compassion, people--it's shocking to see this attitude towards parity on this particular blog.

If I remember the Wellstone bill though, it still wouldn't take effect for several years. Sucks for the people who are ill now, but they're expendable as they have been in the past, I guess!

Where are all Clink and Roy?? I love Dinah but it seems like she's carrying this blog all by herself lately.

She is but she does a great job of it. I will get my act together, I promise.

Did the Dr shrink rappers had to say anything about this?

Parity is a good thing, it's right, it decreases stigma. I thought it was a bit strange to bundle all this stuff together in an effort to make the bailout more palatable.

My biggest parity issue,however, is that even the best of parity bills does not require health insurers to offer mental heath coverage-- if it is offered, then there is parity. So, see page 315 of the bill:
in the case of a group health plan (or
2 health insurance coverage offered in connection with
3 such a plan) that provides mental health or sub4
stance use disorder benefits, as affecting the terms
5 and conditions of the plan or coverage relating to
6 such benefits under the plan or coverage, except as
7 provided in subsection (a).’’;

Can you imagine a health insurance plan that doesn't have coverage for cancer or heart disease? Mental illness coverage still remains optional.

To Anon who wanted to know what we thought of the NYTimes article about yet another psychiatrist receiving money from drug companies:
I'm wondering why nobody offers me 2.8 million. I have a few drug company pens and a prozac mug and a few other trinkets.
The psychiatrist mentioned isn't anyone I've ever met...