Out To Get You 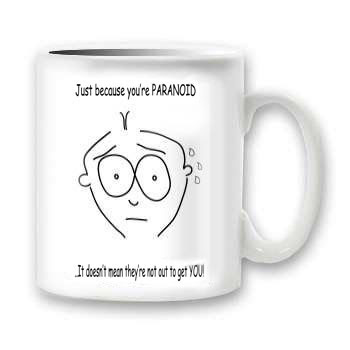 In Tara Parker-Pope's Wellness blog for the New York Times, in Feeling Paranoid? You're not Alone, she talks about a study in the British Journal of Psychiatry where people were placed in a "virtual" simulation of the London tube and asked to comment on their surroundings and they looked at how many people had "paranoid" thoughts. A lot did.

Parker-Pope writes: The findings are important because paranoia is generally thought to be a symptom of severe mental illness. But this virtual reality study shows that paranoid thoughts are common in the general population.

I know this will surprise you, but I had some thoughts on this and commented. So my blog post today is lifted from my comment on the Wellness blog. (I've checked, in blog-o-land, this is not cheating).

While symptoms often exist on a spectrum where the distinction between normal human emotions and symptoms of mental illness is an arbitrary one, the issue you raised is not as fluid as you make it sound.

The experiences of those in the virtual experiment, or the feelings of real subway riders, are not “paranoia” in the sense of a symptom of severe mental illness. In the absence of any unreasonable taint–which you did not describe– your experimental subjects are exhibiting “Suspiciousness.” In a setting of strangers, in a place such as a subway noted for crime, this is far from paranoia, and a degree of hyper-awareness to the surroundings is an adaptive response and not paranoia.

Paranoia is a term used loosely— it may refer to actual paranoid delusions (a symptom of a major mental illness), or it may refer to vague suspiciousness, or people often use it as a defensive counter-response when they don’t like something they are being accused of: “Are you having an affair?” >>> “You’re paranoid!”

Paranoid delusions are fixed false beliefs that hold despite evidence that they are not true. They often take on a bizarre and unreasonable quality — for example, the FBI is monitoring me through fiberoptic cameras in my walls….(if this is true, it’s not a paranoid delusion!). “Ideas of Reference” are a type of paranoid delusion in which an individual believe he is either getting specific messages from the media (Johnny Carson told me to do it) or from unknown others– so the sense that unknown people are talking about you, when they’d have no reason to do so. So, if you’re walking around in a clown suit and believe strangers are laughing at you, well, that’s not a paranoid idea of reference: they may well be laughing at you.

Paranoid delusions are indeed symptoms of mental illness. Suspiciousness is a different phenomena and is often warranted.

I hate the watering down of terms like paranoid and depressed, even though I understand that it's just the way language evolves.

Well written post! All your psych buddies probably know all that and I suppose as a lay person I do too, but it was very plainly written with nice graphic examples (especially the clownsuit example).

What I REALLY want to know, though, is where did you find that funny mug?

I was going to comment on similarities of depression and paranoid misuse but mary beat me to it.
So instead I'll comment on the irrational need of such researchers to medicalise life. Are these the same people who invented the DSM where everything that doesn't fit the mainstream average or expectancy is an abnormality worthy of labelling?
DSM 315.0 identifies a medical diagnosis to be given if someone cannot read or write to the expected educational standard. How is this now an Axis I medical mental disorder problem? It is socio-cultural-educational first - perhaps medical if they are near sighted or the like. Why it is a mental disorder in it's own right I am not sure.
Much the same as "having a bad day" became "neurotic depression" but then Prozac cured us all of that.

On a different (though, related note), the idea of a "continuum" of symptoms/disorders has always resonated with me. With regards to the symptoms of paranoia and delusions, to the left of the psychotic disorders, I'd place Anorexia Nervosa. My rationale for this is the rigidity of the belief, despite proof to the contrary and the lack of social agreement regarding the sufferer's belief. This D/O comes the closes to true psychosis of the non-psychotic D/Os. Just left of the Anorexic, I'd place the severe, dissociative Borderline, due to severe thought distortions, "psychotic-like" anxiety, etc.

These are good points Dinah raised. There is a continuum. As with any continuum, there will be disagreement when one tries to divide it into left side and right side. Where do you draw the line?

The DSM (and its near equivalent, ICD) attempts to distinguish that line by choosing those who have symptoms which cause “clinically significant distress or impairment in social, occupational, or other important areas of functioning.” That's an important distinction.

Now, not all the DSM diagnoses have that requirement, but there is an ongoing move to tighten that up. It has been proposed to have Mood Disorder NOS, for example, have the functional impairment criterion added in the next revision in 3-4 years.

Over-pathologizing, in my opinion represents the convergence of two unrelated, yet somewhat complementary phenomena: the push to "legitimize" mental illness (a good thing) and the general failure to take responsibility (a bad thing) that pervades our (i.e., U.S.) society. "Abnormal psychology" has sadly become the norm. Mental illness is certainly real, but for some has become a convenient excuse for bad behavior.

The question that comes to MY mind when seeing all these "diagnoses" that have come into the DSM and ICD is WHO IS MOTIVATED to have those diagnoses there?

The patients? Nope. They don't need to be told they are mentally ill because they have nail problems or rug burns or because they are fat.

Who stands to gain...a LOT?

I would bet that if you could follow the trail well enough of what got those things in there you'd find a drug company lurking somewhere back there. Does your daughter eat too much? Give her this drug. Nail biter, other nail problems, unexplained rug burns? Here's drug for that. More than ANYONE the drug companies are sniffing around looking for new diseases they can treat. If they can treat it with a current drug or one that flunked out for treating a different malady...even better.

Of course psychiatrists write the prescriptions so ultimately the buck stops there. At the patient level it takes a free, adult patient with backbone to refuse a prescription.

said--"Of course psychiatrists write the prescriptions so ultimately the buck stops there. At the patient level it takes a free, adult patient with backbone to refuse a prescription."

My take as the psychiatrist is that people come wanting a diagnosis and a drug to make it better (Damn it, I'm not just SHY, I have SOCIAL ANXIETY DISORDER or.... I don't just get distracted, I have ADD)...and they don't want to hear that they have a varient of normality. Actually, this isn't the case for paranoid delusions-- but other things...
of course, I see the subset of people who walk through my door and those who don't want meds tend not to come seeking the services of a psychiatrist.

One major motivating factor for defining problems as illnesses is that treatment for subjective distress of any kind doesn't get reimbursed by the insurance companies unless it gets a diagnostic name.

But, in general, I agree that if the there's a med for a condition, of course the pharm companies would like it to be prescribed to as many folks as possible....
dinah

That is a very useful and useful distinction.

Another example of downgrading of word meanings is the "common cold = flu" thing. When I am being a pharmacist, I have loads of people come in smiling and happy and on their way out for the night, telling me that they have the flu.

It is my duty to inform them that actually they have the common cold and if they had influenza they would be in bed groaning and wanting to die.

I had also commented on the Well blog (comment #6) with a similar theme (what they are describing is NOT paranoia, not even a mild version.) I read both blogs regularly so it was interesting to see Dinah's comment over there.

therapy patient: the reason all those ridiculous ICD-9 diagnoses exist is not to push drugs on patients, but to make every doctor/patient encounter documentable. Unfortunately people DO see their doctor about rugburn and hangnails, and the doctor has to document that.

Dinah: "those who don't want meds tend not to come seeking the services of a psychiatrist." I don't think I agree, exactly -- this statement seems to imply that most people who see a shrink are looking for an easy fix for minor problems. I think there are a lot of people whose family/primary care doc/etc pressure them to see a shrink, and they realize that their symptoms are destroying their life, and eventually they reluctantly agree to go because they're a mess and have nowhere to turn. Kind of a reluctant last-resort thing.

I know that that's the standard definition, but it's problematic.

A friend of mine who is a pediatric cardiologist in critical care described his belief that he would paint his apartment by a certain date as a delusion.

I said that that was a rather strong word, and he said, "Well, what's a delusion? A persistent and fixed belief despite all evidence to the contrary."

Perhaps the sunny day had made him overly optimistic, but he's not psychotic.