A New Use For Gangs 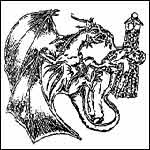 I found a new use for prison gangs today. It was completely unexpected.

The patient was a very large, somewhat scarey-looking guy with a history of bipolar disorder. When manic (and psychotic) he got violent. He was transferred back to my facility for refusing to take his meds in a lower security setting. I forget what happened there, but he just wasn't doing well. Back in my facility he was among his associates from the Black Guerilla Family, a well-known prison gang. They respected his size and definitely didn't want him getting sick. They made sure he went down from the tier to the pill line to get his medication.

You'd never guess he had a mental illness when he was well. He was still big and scarey-looking, but he was also articulate. He talked about being able to haul someone into a shower and "mess him up" without guilt or remorse. He talked about staying vigilant, knowing that being part of the BGF made him a target for other gangs. He talked about being bothered by the fact that his violence and lack of conscience didn't bother him. He talked about "wearing a mask" and passing as normal. I could have listened to him forever, and it would have made a good documentary about sociopathy.

But anyway, back to the gang. In psychiatry you hear a lot about the importance of social networks and family support and how this can prevent relapse for people with psychotic disorders. What you don't always think about is how a prison gang can serve this same function. The BGF helped keep my patient well.

He finished the appointment by asking how I was doing and if I was OK, which I thought was rather interesting. It was a bit like Tony Soprano, someone who could execute a guy without batting an eye, being concerned about the ducks in his pool. And I was the duck.

Very interesting post- thanks. It certainly wasn't something that I would have ever considered when thinking about gangs.

...or the horse. Remember when Tony's horse died in the fire? He was so irate that he brutally, and I mean brutally (face on stove burner, anyone) beat up and murdered his "partner" who set the fire...

Anyway, have you seen a new show on the History Chanel called "Gangland"? It comes on once a week and they talk about one gang each week. It is very interesting. It was on last night.

Fascinating post. I find it interesting that the gang becomes a "family" support system in a positive way, when many of us have real and loving families that struggle to be like that and to understand we need medictaion and psychiatric help. Remarkable.

Forget social support. Correctional settings are virtually devoid of social niceties, let along genuine social support. From my experience as a psychologist in the Federal prison system, I'd say these BGF members were simply looking out for their own interests. On the one hand, medicated, this guy is a ready support of muscle and can work toward their agenda. Un-medicated, he's an assault waiting to happen indiscriminately. He could just as easily injure a BGF member, a rival gang member, or a C.O. Meaningful, supportive relationships between inmates are the exception, not the norm. The only support being a gang member offers is a degree of safety.