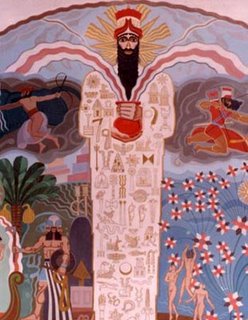 ClinkShrink likes to hear about psychiatry from our readers in other countries. Lily (DrivingMissMolly) sent us a link to a blog owned by an Iraqi psychiatrist. Check out Psychiatry For All by Saminkie of Baghdad. The photos, the rendition of stigma in that country, the accounts of limited electricity and dealing with PTSD while the guns are still firing-- they are moving. I read the whole blog, it's not long, but it is a rich account of a poor and war-torn nation.
Posted by Dinah on Monday, February 05, 2007

Thanks for making this an entire post. Sami sounds like such a sweet guy it's enough to make me want to send him a care package with lots of batteries!

I admire those that have been able to retain idealism through the worst of times, like Sami.

He continues to be positive in the face of scorn from family and from the culture at large. He's heroic, yet an everyman at the same time.

Seems I can't get into our dashboard. Will post when able.

ok...this one is Clink's fault! I looked at the blog, saw a new post from her, even had comments already!
And then 30 mins later it was all gone. I already have doubts about my sanity - was trying to decide whether a disappearing post was a delusion or a psychotic break....

Here's a Twilight Zone moment jcat---my cable was out yesterday. Maybe Comcast is playing with both of our heads.

Oh no...this gets scary! Clink, you mean you didn't temporarily put up a post on part one of what you are learning at your convention?
Maybe my mushroom pasta sauce that I had for supper was made from the wrong kind of mushrooms...
I'd better go buy out all that the store has!