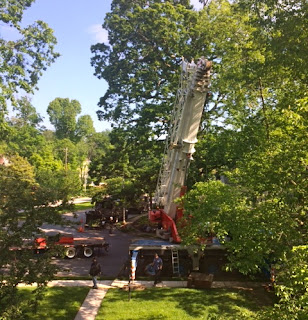 Good morning.  I'm typing very quickly because I'd like to put up a blog post before the power company de-electrifies me for the day.  This is the 5th attempt to take down our dying old oak tree, and it looks like it may actually happen today.

And there went the power..... 12 hours later, the power is back and now my house looks naked without it's oak tree.  Not a person-- and it wasn't safe to leave it up any longer-- but I am feeling a bit of grief for both the tree and the shade and the way my house looked when I woke up today.

That said, I wanted to share an article with you that I read in the NYTimes Opinionator.  Grieving my Patient's Friend is a heartwarming piece by Galit Atlas who is a therapist who comes to feel attached to his patient's friend, and then learns she is dying.  I loved this piece because I identified with it so strongly -- I've listened to the stories of other people, imagined what they were like, and gone through their traumas, celebrations and, like the author, even their deaths.  Oddly enough, I sometimes hear about the same people and their stories from several patients, or learn the fate of a friend or family member of one patient years later from another patient.

It isn’t unusual for therapists to feel that they know intimately their patients’ friends, lovers and family. In some ways, we get attached to these people, their stories, their successes and struggles. We accompany them at once closely and from far away, as if they are favorite characters in a beloved book.


She tells the story of her patient, Naomi, and of Naomi's dying friend Isabella.


Naomi had looked at me and then added, “Can you believe it really happened? I lost Isabella. She will never come back.”

Oddly, I felt that I had lost something as well. But mine was an unusual, unrecognized loss. I grieved for a woman I had never really known, and no one could see or acknowledge my pain. I was alone with it.

It's a poignant piece so I hope you enjoy it.

As a long time psychiatric patient, I often think about my doctor's interior life. But, through the years, it is often - I guess because the therapeutic relationship for me is so ineffably strong, that I must protect my thoughts, and "not go there" too much. What I have learned through the years is to concentrate my sight (as if having learned to put on blinders) on my side of things.
That all said, I cannot help but appreciate the words, the thoughts, the processes of this doctor.
All doctors, I suppose.
How do they bear the humanity, the crucible of life that is their daily metier?
I weep so often for my self.
I have only to trust that my beloved therapist can handle his weeping.
Gosh, life is hard, and painful.
Thank god for therapy, and for psychiatrists, who seem willing to enter this uncanny, fragile, promised to no one, therapeutic alliance.

Best Psychiatrist Ever often told me stories about his family or stories the Rabbi told, IF they applied to what was going on in therapy.


It has been at least 12 years and I cannot get over Him, he was the "Gold Standard" in therapists, I guess the last of the Psychiatrists who actually did therapy. I know I have to get over him and move on, I suppose to a psychologist or other therapist who does therapy but it is soooooooooooooooo hard....I have nightmartes every night, I don't know what to do. I am on an anti depressant, but it doesn't seem to be doing any good. All I want is my other Psychiatrist back and I know I can't have that. I have tried other therapists here and.....it just doesn't work. it would seem, even in as horrible shape as I am, no therapist is better that.....Him.


To try and lighten things up a bit....after New Year's one time, I imagined Perfect Psychiatrist had a wonderful holiday, unlike me. Now, I don't know if this is a true story but I have to trust him.

Best Psych "No, sctually I spent the night looking for my son, who was at a party that he shouldn't have been at...."

Admin, if not okay please remove!

Our facebook group “selfless” is spending this month spreading awareness on prostate cancer & research with a custom t-shirt design. Purchase proceeds will go to cancer.org, as listed on the shirt and shirt design.


Shrink Rap Why do you love to ignore so much to a person who so obviovsly needs help?

Tracy,
I was away. A blog is not the right place to go for help. I do hope that what every you need help with gets rectified very soon (or already was)
Dinah