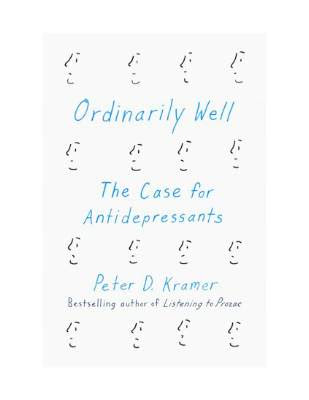 My post for today is a review of Peter Kramer's new book over on Clinical Psychiatry News.  You may remember him from Listening to Prozac, and he's back now with more on the science that supports the use of anti-depressants.

The review of Ordinarily Well can be read here:
http://bit.ly/1Y6Tu9p

Sorry, Dr Kramer is not the best authority to be advocating for meds, if you have read Listening to Prozac, and then spoke to him about a year or so later following the release of that first publication. He was at a conference, I missed the first 1/3 of his talk, and at the end had the misfortune of getting next to him and asking him an honest question: "aren't you a bit wary of a drug that was initially sold as a 'one size fits all' dosing, and took serious negative reporting once it was out for a couple of years then Lilly released lower dosage strengths?"

I am not joking, the man got in my face, in front of about 5 other people, and said pretty much this: "Prozac had it shortcomings, but, why would you be critical of a medication that has revolutionized treating depression in psychiatry? What are you, a Zoloft advocate?!"

So I was quick to retort: "No, I am a responsible psychiatrist who doesn't shill for a drug or my own publications, and I am always wary when companies are forced to fix their mistakes once a lot of morbidity and mortality ensues. Oh, and for all here, remember the 4 Ps of pharmacology; promise, panacea, placebo, and poison. Maybe you'll write about that in the future, DR Kramer?!"

He just turned and ignored me, as did I of him about 30 seconds later.

He is selling a book, Dinah, don't forget that. Any free press is good press, until proven otherwise. And I won't be buying this one, count on that!

And pay attention to inconsistencies as you note in the latter end of your review. Consistency is the hallmark of success, not popular, easy, or convenient. You probably know that, but, do the likes of Dr K?

I still use the 10mg tab of fluoxetine as a first dose, sometimes the 1/2 as 5 mg. How many docs here even think of that...

Wow....just wow......a review fron a supposed Psychaitrist and no answer? No wonder all the good ones are gone forever!