What I'm Learning at the MGH Psychopharm Conference, Continued 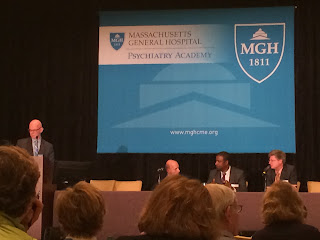 Moving right alone here, but I'm now many lectures behind.  I'll do my best:

Dr. Jenike on Obsessive Compulsive Disorder
"It's almost unheard of to have a patient get all better."
~SSRI's are the usual medication, often at higher doses than used to treat depression.
~Cognitive Behavioral therapy is the best augmenter.
~MAOIs may help with OCD with panic attacks.
~Lots of other stuff has been tried including Dilantin, Neurontin, morphine, Zofran, pindolol, tramadol St. John's Wort, inositol.
~Glutamate may be involved in OCD and medications that effect glutamate have shown some promise, Including Namenda (memantine), riluzole (a medicine used to treat ALS), and N-Acetylcysteine
~In sudden onset of OCD, consider infectious etiologies, including PANDAS (Google it)

Dr. Simon on PTSD
~propranolol doesn't seem to prevent PTSD (sorry, Roy)
~People who get opiates may be less traumatized -- better pain control likely
~steroids may have some some role in preventing PTSD if administered soon after a trauma
~Don't use benzos for PTSD, they interfere with extinction learning and ultimately make PTSD worse.
~Don't use benzos for PTSD.
~Prazosin helps with nightmares. Lunesta may help with insomnia
~SSRIs help, but not a lot.  Risperidone and quietiapine may be helpful, there is not enough data to say much about other antipsychotics.
~There's not enough data to support that smoking marijuana is helpful.
~We need more research.

Dr. Zakhary on OCD-related disorders: Body dysmorphic disorder, trichotillomania (hair pulling), skin picking and hoarding
~There are no FDA approved medications to treat these disorders.  Check out http://Trich.org
~People with body dysmorphic disorder can spend up to 8 hours/day looking in the mirror.
~SSRIs may help.  There is no indication for using an antipsychotic even if the patient is delusional.
~Tricotillophagia is the name for eating the hair after it's been pulled out.  You learn something new every day.
~N-acetylcysteine may be helpful (NAC), dose of 1200mg -2400mg/day.  Brand names Jarrow or Swanson, and you can get it from Amazon.  Swanson is cheaper.
~Also Naltrexone at 50-100mg, or Olanzapine, 10mg/d
~For skin picking: SSRIs may help.  Olanzapine 5mg/d, Abilify 5-10mg/d, Lithium, or Milk Thistle. It's all case reports.
~An itch workup should be done.
~Hoarding: medications studies are inconsistent and very limited.  CBT!

So, I've gotten you to 5:15 yesterday.  I went to sessions on Sleep Disorders (avoid meds, refer for >CBT!, and apparently trazadone doesn't work) and Natural medications for psychiatric disorders at night, and then dinner at a wonderful French restaurant on Newbury Street with a friend.  It made for a late night, and it all started over this morning with more to come tonight, and all day tomorrow.

Note: Im a patient and not a medical professional. :)

Wow. very fascinating! So, are benzos good for anything? From reading your blog of the last few months (including past posts and those wonderful podcasts I wish you'd continue), benzos sound terrible. So when would an appropriate use for them be? It reminds me when I was 16 (Im 33) and a doctor in the ED prescribed me xanax because I was having anxiety in school ( i was there for something else). I took one pill and it didnt do anything for me so I never took them again. Holy crap am I glad I did that!

Anyway, I love these posts. Hope you get to post more!

As for your post on criticism from drive-by-commenters and those criticizing you for being insensitive or whatever: Bah! I love this blog and check it daily. Haters gonna hate! I get a lot out of this blog and hope you continue it. It's hard to find quality and reliable writing on the internet regarding psychiatry.

@bluejonah, It's pretty well established that benzos aren't good for PTSD. In my opinion, though, they're overly demonized of late. The best use of a benzo is an occasional time-limited situation that brings anxiety, e.g., an airplane flight. Even if the anxiety arises in everyday life, I see little to worry about if the med is taken once or twice a week, or less. Problems arise when this slides into daily use, at which point tolerance and dependence may occur. (And I'm not a child psychiatrist, but I'd be much more hesitant about giving them to a 16 year old.) Given that benzos are safer than most of our other psych meds, I think we should distinguish meds like benzos with some potential drawbacks, versus those that commonly cause serious side-effects, like mood stabilizers and neuroleptics. (Common antidepressants are in between, in my opinion.) Like everything else in medicine, there are risks and benefits to weigh.