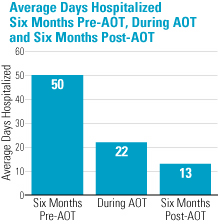 I'm going to refer you to a long article in The Herald News,  Focus: Safety concerns prompt states to revisit involuntary commitment laws that address the mentally ill.

Now I'd like to bring you to the end of the article where there is mention of the fact that President Obama has authorized $60 million to fund these programs.  If we divide that evenly between the states, it's about $1.2 million per state.  New York already has a program for involuntary outpatient commitment called Kendra's law.  The studies have shown that it has been successful in decreasing hospitalizations and incarceration.  The costs are calculated  per person "before" and "after" involuntary commitment, so the amount of money shelled out for each patient goes down when they've been put in the program.  What isn't reflected in the cost, is the overhead and infrastructure that New York State put in place to increase services.  I will point out to you that Kendra's law is mostly used in New York City, around Albany, and a few other hot spots, but not in the rest of the state.  And how much money has this successful program cost to implement in these populated parts of New York?  From the website of the NY Office of Mental Health:

The Governor's budget for Fiscal Year 2005-2006 provides more than $32 million for operation of services in support of Kendra's Law. This appropriation continues State support of case management and other services aimed at keeping recipients in a treatment program, including psychiatric medication as required. Since Kendra's Law went into effect, Governor Pataki has also acted to expand access to case management and other key community-based mental health services that would be needed by individuals receiving court-ordered treatment, as well as many other individuals with severe mental illness who have less intensive, but still substantial, service needs. The Governor's budget for Fiscal Year 2005-2006 also provides more than $125 million in ongoing funding for such services. This "Enhanced Community Services" funding has been used to both improve and expand the capacity of the existing community-based mental health system and to strengthen the cohesiveness and coordination of that system. More specifically, Enhanced Community Services were designed to steer the New York State mental health system toward a more person-centered, recovery-oriented service delivery approach, and were targeted for the following purposes:
---------------
Many states have involuntary commitment laws. Few of them implement them, as the Herald News article highlights.  It costs too much.  $60 million is not going to do it for a country of 300 million people.  And while we do know that the program reduces hospitalizations and incarcerations in this vulnerable group of very ill, high users of emergency mental health services, what we also know is that the recipients don't like it; satisfaction rates are low (---that statistic doesn't make the news, presumably because no one cares?)

Finally, the article ends by pointing out that involuntary outpatient commitment is not about forcing medications.  This is a common saying of those who support it, but when legislation was proposed in Maryland, the legislation included an order for a specific class of medications and procedures to make changes or contest it.  If a judge tells you that you have to take a medication or you can be brought by the police to a hospital for evaluation, how is this not forced medication?
Posted by Dinah on Sunday, May 18, 2014

Read the article in last week's USA Today, "The Cost of Not Caring", quite the read.

and then reader rebuttals just out today:

Only 108K available psychiatric beds between pure psychiatric and general hospital sites, per the article chart. Do the math for that for 50 states, just over 2000 if distributed equally, and if 20% of Americans have psychiatric disorders and let's say only 5% have acute care needs to consider inpatient care, well, who has access to those 3.1 million beds?

New lottery game coming, here's the tag line: "If you want a bed, you have to want yourself or another to be dead"!

Man, that is a harsh line, but, this is the coming of the movie "Idiocracy" in real life, the dumbing down of this culture is real and now!

I wish I had something intelligent to say on the s ubject, but other than agreeing that 60 million for the whole country isn't much, I can't think of much.

Wish I c ould,we need something better, i just don't have any ideas. Good thing it isn't up to me then.

Yeah, involuntary outpatient treatment is forced treatment, despite what TAC pretends. Forced outpatient treatment discourages patient honesty. If the patient admits they are not taking the medication they know they can be forcibly hospitalized, so I would bet many on oral medications are simply throwing them in the trash even as they are lying through their teeth that the drugs they are not taking are helping. If the patient fears the treatment providers, they will have no incentive to be honest with them. There's also no incentive for patients to be honest about what is going on in their heads. They will know that if they admit to certain thoughts they may end up with an increase in the medications they don't want, so best to keep quiet.

There has to be mutual respect for this relationship to work in the long run.

P-K, I think you may possibly maybe be missing how very sick these people are. It's not a matter of lying about taking their meds (which I'm sure many do) and being able to hide their decline simply by not revealing the contents of their thoughts. These are generally people who are so sick that their behavior, when ill, calls attention to itself. They bother other people. These are often the people running naked on the highway, urinating in front of stores while talking to themselves, drenched in filth and feces who call out to passers by. Or they become belligerent and tormented while sleeping on the street and picking through the trash.

These services are expensive to implement, they are reserved for the highest users of mental health care, those rotating in and out of hospitals and jail because they are noncompliant with followup and meds. Those who go to treatment willingly are exempt, and those who get sick despite for reasons other than noncompliance (for example, breaking through the medicines, or an acute stressor) are exempt. Remember, Kendra's law was about a very disorganized man who killed an innocent woman in the subway. And NY put $125 million into services. Our society has neither the resources nor the desire to mandate care for those who are able to hide their symptoms, or for those who's symptoms do not render them likely to be dangerous.

I understand that it is psychotic behavior that lands people in AOT. I was more speaking to what can happen once they are in AOT. Rather than prove to the patient that they are not safe and cannot trust the health care professionals, I think it is better to work on building a trusting relationship with the patient. Otherwise, you make it very likely that they will hide their psychotic thinking, flee treatment, throw oral medications away, and/or discontinue medications once they are out from under the outpatient order.

People who are psychotic, if they fear the consequences of sharing their thoughts with a psychiatrist, can and do learn to hide psychotic thinking. For example, I was reading about a woman who was in a program like AOT but was throwing the medication away. Her psychiatrist was oblivious. She had learned that she had to hide her thoughts from the psychiatrist due to fear of consequences. Likewise, early on I learned that if I told people that there were people watching and listening to me through the vents in my home, I risked being hospitalized or being forced to take a medication I did not want to take.

I just think a better way is to slowly build a trusting relationship with a scared person. It's not going to be easy, particularly if there has been force used in the past. It took over 10 years to get me in to see a psychiatrist, it took months after I started seeing the psychiatrist to develop trust to where I actually agreed to try the medications, but it can be done. He knows what is going on with me, because I trust him enough to tell him.