Is the Emotional Support Duck Biting Back? 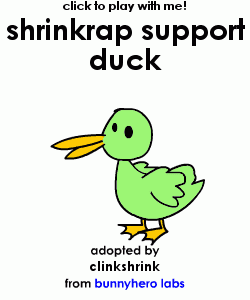 If you've been following Shrink Rap since the very beginning, you'll know that our adoption of the Duck as our mascot was prompted by an article in the New York Times, back in May of 2006, about people taking emotional support animals on airplanes for comfort. Mostly, people brought dogs, sometimes cats, but also monkeys, a miniature horse, and someone had brought a duck dressed in clothes.  The three of us embraced the concept of a well-dressed emotional support duck, and the duck idea ran wild, though we eventually settled with a traditional, naked, yellow rubber duck.

Two years ago, we summarized the history of the rubber duck here.
We've probably taken the concept too far, as we spent a Saturday night at APA with necklaces of rubber ducks around our necks, a duck cake to celebrate the anniversary of our blog, and I have ducks hanging from my kitchen chandelier.  A reader (Lily, where did Lily go?) contributed to Heifer international in our honor: a flock of ducks to a family of course.  And when our book went to press, there was a meeting at the Johns Hopkins University Press to consider whether they were willing to put a small duck on the cover of our book-- told we'd look like quacks, The Duck was Nixed. It's been a ducky history here at Shrink Rap and somehow we've stayed away from blogging about Duck Dynasty.

So I would be remiss if I didn't point you to an article in the New York Times talking about a backlash to the concept of emotional support animals on planes.    In an article titled Emotional Support with Fur Draws Complaints.,  Billy Witz writes:


Classifying animals as emotional support animals has long been permitted under antidiscrimination laws, allowing owners to take them into restaurants and shops or to residential buildings that have no-pet policies. To demonstrate the need for an emotional support animal, the animal’s owner needs a letter from a mental health professional.

But their presence on airplanes is increasingly facing a backlash from flight attendants, passengers with allergies and owners of service animals, like Seeing Eye dogs, who say that airplane cabins have become crowded with uncaged animals who have no business being there. The Department of Transportation does not require airlines to keep data on emotional support animals. One that does, JetBlue expects more than 20,000 emotional support and service animals this year.

I would like to point out that the  complaints are about emotional support animals with fur, not feathers, and perhaps there should be more of a push for emotional support ducks.  I haven't heard that they are bothering anyone, and they are very tasty as well.

I think there also has to be consideration for the passengers' emotional well being on the airplane. I don't imagine I would be real calm after being cooped up for hours listening to quack, quack, quack...

And, they make a good point about allergies. Everyone is having to breathe the same air, and I have relatives who are very allergic to cats. Their physical well being is important, too.

Spotted your write – ups, it’s cool. Very beneficial and interesting there are some ideas I haven’t heard before. Thanks for sharing.

Thank you for the link Steve, I enjoyed your post and I felt better that you had written the letter for your patient and shared in my discomfort.

I have a similar piece up today on Clinical Psychiatry News...