Why Don't I Hate Walter White? 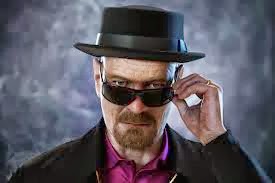 I'm back from vacation and Shrink Rap resumes, even in the face of the continuing federal shutdown.
Note that over on Clinical Psychiatry News, ClinkShrink wrote about "Trauma Informed Care" and how it has traumatized her,  and I have an article on "Antipsychotic medications and The Psychiatrist's Dilemma."

So, I surfed over to Psycritic to read about all that is right with Breaking Bad in A Psychiatrist's Favorite Breaking Bad Moments.  Like Psycritic, I too am a Breaking Bad addict -- come to it late, then caught up in real time.  Maybe it's that we made popcorn during the episodes for a while, but the ritual of sitting down every night to popcorn, and Walt and Jesse, was pretty pleasant for a while there.

So why don't I hate Walter White?  The man is evil -- he fills the world with 96% pure methamphetamine, he shoots people, and he arranges for the deaths of children (I mean really, how purely evil can you get?), and yet still, I was sucked in.  Maybe it's the premise; the poor guy has lung cancer and his health insurance doesn't pay for his cancer treatment. Really? He's a high school chemistry teacher, his health insurance doesn't pay for cancer treatments?  Deemed "experimental," I believe was the problem. Okay, I'll move beyond that hurdle.  So he's a poor family man who teaches school, has a teenage son with cerebral palsy,  and has a pregnant wife, and then he gets diagnosed with a fatal disease that he can't afford treatment for -- so, of course he's going to start a meth lab and bring in the big bucks.

But here's the part I got hung up on.  Walter White went to Caltech -- his job as a chemistry teacher is deemed a failure.  People who graduate from Caltech go on to bigger and better things, and indeed, Walter was involved with a company he started with a woman named Gretchen and her husband, Elliot.   They had a business together, Gray Matter Technologies.  Either the details weren't all there, or I  don't remember them, but somehow the idea was that Elliot won both the girl (Gretchen) and then somehow stole Walter's brilliant ideas and screwed him out of his rightful stake in the business.  He left the company feeling bitter, and went off to be a high school teacher while Elliot and Gretchen continued with a multi-million dollar firm and the high life.  Upon learning that Walt was sick, they offer him a job so he'll have better health insurance, or if that wasn't good,  they offered to pay for his treatment.  Walter was too proud to accept their offer (? why -- given that he felt they owed him?) so he lies to his wife and tells her Elliot and Gretchen are footing the bill for his cancer treatment and he goes on make meth with Jesse in a trailer.  So he had an option, he wasn't really forced to make meth.

Walter contends that everything he does is for the good of his family.  He makes and loses money over and over, and finally has so much money that it has to be placed in a storage facility.  Funny, these people never seem to spend any of the money, they continue with their modest lifestyle, and perhaps that adds to their likeability.   Skyler, Walter's nagging wife who becomes a not-as-reluctant-as-you'd-think conspirator in the affair, is so hated by the general public that the actress, Anna Gunn, wrote an editorial in the New York Times pointing out that she is not the character, inspired by death threats she (the actress in real life) was receiving.

But despite his heartfelt insistence that the money and everything he did to get it was for his family, it is clear that Walter loves the new lifestyle. He loves being good at something.  He loves being important. He loves the power and the adrenaline rush and the thrill of figuring out the next move and how to outsmart those who try to foil him.  And perhaps it is this that draws us all in: after all, we all want to be important, we all want at least a little power, and even if we aren't going to pursue the fast life, it's kind of fun to watch someone else don a silly hat and have gunfights.  We'll note that sometimes Walt starts out stranded in the New Mexico desert in his skivvies,  muffin-top piling over the BVD wasteline, so we know that he's so very human, and so very vulnerable.  You just want this guy to get some power, and when it goes much too far, when he destroys everyone he goes near and everyone he loves, you somehow remain still in his court.  By the end, I didn't so much like him, but still I marveled that I didn't hate him.

Most of the characters are not who they appear to be, and Walter White is the ultimate anti-hero who somehow draws us in, even as he does all these heinous things.
Posted by Dinah on Sunday, October 13, 2013

In the context of the discussion of antipsychotic drugs and reflecting on the usefulness of drugs for schizophrenia also being useful for (bipolar) depression, my thoughts on that and narcissism: http://irvingpsychiatrist.blogspot.com/2013/09/anti-psychotic-drugs-and-bipolar.html

Sarebear said...
This comment has been removed by the author.
October 19, 2013

Hi Sarebear,
I was glad to hear from you. I hope I didn't spoil Breaking Bad. I have watched a bunch of episodes of Duck Dynasty, some of my family members are quite taken by it. I don't get the hype, though Phil is growing on me. Quack.