What I Learned: Part 2 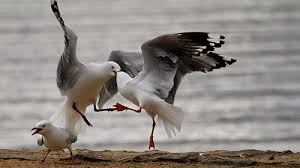 Welcome to the second day of the AAPL conference. Dinah knows I have to throw in a bird picture somewhere. The fighting gull picture is in honor of the birds duking it out overhead during my boat ride across the bay last night. More to follow.

I started out the day with a review of new legal cases pertinent to forensic psychiatry. In training forensic psychiatry students are required to learn a set of legal opinions known as the "landmark cases," in other words, decisions that have profoundly influenced the practice of psychiatry. The trick with this is that you don't always know when the opinion is issued whether it will have a large impact over the long term. AAPL does a pretty good job of picking out the cases that will have significant influence.

The panel presentation I attended talked about the history of the Plata case, the Supreme Court opinion which ordered the state of California to decrease its prison population by 42,000 inmates. This is a significant decision since there are several other states in this country (Maryland included, the home of the Shrink Rappers) in which the prison system is running at 140% over capacity. This is the same level of overcrowding as California. The Supreme Court was divided about whether to order this. Justice Scalia called this the "most radical injunction in this nation's history." There was data presented about the number of crimes committed by the released inmates, but there was no context given to know if this rate was higher or lower than expected for California's parolees. Most inmates weren't released, they were just moved to local detention centers---thus shifting the burden but not necessarily solving the problem.

The other cases were US v Comstock, the Supreme Court case about the civil commitment of Federally detained sex offenders; Ryan v Gonzales, about competency in habeas corpus proceedings; Delling v Idaho, about the constitutionality of abolishing the insanity defense (states are allowed to do it), and Snyder v Phelps, the Westboro Baptist protest case from Maryland which said that free speech in a public place was not grounds for intentional infliction of emotional distress. On the child psychiatry side of things, all the cases related to the sentencing of juveniles. Graham v Florida outlawed life without parole for nonhomicide offenses. Miller v Alabama outlawed mandatory life without parole for juvenile homicide offenders.

After the landmark case presentation I continued my current theme du jour: immigration. I listened to a great talk by attorneys and a psychiatrist involved in the class action suit, Franco-Gonzales v Holder. For those of you who aren't familiar with what's going on in the world of immigration, now's the time to pay attention because it will affect all of you eventually. (You can read the preliminary injunction here.) Franco-Gonzales is an intellectually disabled immigrant who was arrested for throwing a rock during a public brawl. He was arrested and served a one year sentence. Immediately after this, he was taken into custody by ICE and held for five years. He had no pending criminal charges, had already served his time, and had no lawyer. Because of his mental disability he was unable to represent himself or take any legal action on his own. His case was combined with six others, all involving seriously mentally ill unrepresented detainees who had been held for at least six months. The court in this case has ordered the Federal government and Immigration and Customs Enforcement (ICE---the branch of the government holding the detainees) to provide "qualified representation" (legal services) to these detainees. They have also been ordered to assess their competence for self-representation. All of this means that mentally ill people are starting to be granted fundamental due process rights that never existed before, even though they are not American citizens. We are now also going to have to figure out how to provide community mental health services for undocumented immigrants with serious mental illnesses, even though they are not eligible for public benefits. (Ironically some of these detainees, if deported, might be deported to countries with better mental health systems than ours!)

I really enjoyed listening to the forensic psychiatrist who treated an undocumented immigrant and hearing how she advocated for this patient, as well as from Franco-Gonzales' own lawyer who was in the position of having to figure out what to do for this client when there were no existing laws AT ALL to cover his situation or to provide a basis for release. It's quite creepy to think that in this country someone can be held for five years, without a lawyer or even a right to one, without having committed any new crime.

Lastly, I always make a point of attending the presentation by the AAPL computer committee. This is my rare opportunity to geek-out with fellow tech nerds. The most important topic this year was the new HIPAA requirements for using secure email to transmit protected health information, and the need to have a business associate agreement (BAA) with any cloud storage service you use to save clinical information. This applies to anybody using things like DropBox or Google to store documents or other clinically relevant data. The trick is that Google won't sign a BAA for clinicians unless you're using their fee-for-service business apps (which are reportedly secure, although probably not from the NSA) and I think DropBox may not sign a BAA at all. So: do some homework, this may apply to you.

Today is my last conference day and I'll be heading home early tomorrow. I give heavy props to my nameless but fearless former fellow who arranged our alumni dinner last night here on his home turf and gave us a terrific tour of the bay. He raised the bar substantially for all future alumni events. (And yes, nameless fellow, you WILL return to Maryland some day. I will not give up. And now I know where to find the boat.)

Posted by ClinkShrink on Saturday, October 26, 2013

Nice post. Who needs to go to the conference when we have you tweeting and blogging it? This is excellent. But do put those birds in restraints.

First, thanks for the tweets and notes, Clink.

As for the new HIPAA regs I would like to add that as far as I know they still only apply to covered entities, ie those who bill electronically using code sets.

I have noticed a substantial downturn in my expert witness business since increasing my own Web presence. I wonder to what extent forensic psychiatrists avoid using social media and other Web publishing for fear that they will be challenged in court to reveal and explain all their writings. But without participation in this new medium how can they credibly opine about related matters on the witness stand?

I'm sure that's a key reason why you don't see forensic psychiatrists involved in social media. Personally, I think it's helped my forensic work and clinical practice. I don't have any concerns about what I write given that everything I put up is subject to global peer review. I'd say that's a higher standard than academic publication.