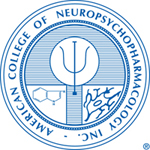 Moviedoc wants to know don't the neuropsychopharmacologists tweet their sessions?  They do.  Today, I tweeted psychiatry Grand Rounds at Johns Hopkins on Neuropsych testing (#jhhgr) and tomorrow I'll be tweeting a CPT seminar from 6-8 pm (#cpt)
Okay, let me move over and let Dr. Kastenberg blog.  She even sent pretty pictures.
---------------------------
ACNP Day 2

This morning’s plenary lecturers showed how nerve cells in the brain are connected to one another and how those disruptions in those connections can help us understand disease processes.

We know that neurons communicate with one another by spitting chemicals into the space between them that act at specific receptors.  Those chemicals are called neurotransmitters.  Our current models of mental illness suggest that disruptions in this pathway - such as the wrong amount of a neurotransmitters or the wrong shape of a receptor – are the source of the problems.  And medications that treat mental illnesses typically restore balance to that system.

But this research looks at where the neurons are in the brain.  Where do they travel?  How do they organize within the brain?  How do messages get from one part of the brain to another part far away?  And does the structure of these pathways explain their functions?

Scientists now can image many of these pathways and the images look both structured and complex.  This one by Van J. Weeden at MGH by represents a huge wiring diagram. 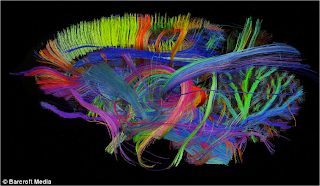 This one by Edward Bullmore at The University of Cambridge looks like a complex airline flight path map.

These maps beg more questions.   How do disruptions in the connections lead to diseases like schizophrenia?  An illness might result not only from changes in neurotransmitters, but also from connections that are disorganized, over traveled or under traveled. 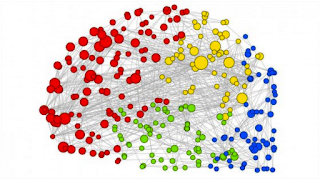 Note from Dinah: This looks like something Roy would draw on his iPad.

This post is interesting. I learned about neurological synapses in graduate school in 1984. Has there been much progress in understanding how this process affects mental illness in the medical field since then? Where have they found the most success? Thanks

Enormous progress has been made in understanding how the brain works with associated ideas about new and different ways to ameliorate mental illness.

And active work is being done to look at drugs that mediate neurotransmitters other than serotonin, norepinephrine, and dopamine. Glutamate is just one example.

But the brain is arguably the most complex organ in our bodies. So there is always more to learn.

Now, I know that the experience I'm about to relate, may sound like I'm not "getting" this post at all. I do. What I'm doing is showing how a couple aspects of a bipolar event feel like in terms of things in my brain feeling shut down, ramped up, etc. and even if that doesn't necessarily mean that's what the brain is doing, it at least is the personal connection I can make between my behavior, feelings at the time, etc. and what it FELT like my brain was doing to me What all that means in terms of what the brain is actually doing, well it sounds like those questions are being asked and researched all over.

Anyway. A week and a half ago I was out shopping for teenage dresses for my daughter. I rapidly became quite annoyed, irritated, agitated, and then actualy ranting and raving, loudly, in several stores, about the deplorable state of modesty or availability of much decent selection at all as it relates to female teenage clothing.

During all this, I had a nagging vague sense of disconnectedness, a just not quite conscious feeling that something was off (put my finger on that when I started coming out of it), a feeling of being untethered, from something. (The specifics of these were nailed down as I came out of it, or after, since during the episode I was too "pushed" by making my views public, since the urges to be loud, outraged, and other things all out of proportion to the situation kept drowning out this vague nagging sense of something)

The episode covered two different stores, worse, louder, etc. the longer it went on. Once or twice the fact that my daughter was right there and a vague botheredness that oh, this might not be good for her to see this kind of behavior modeled as how one would act, and I mentioned once or twice to her that it wasn't the way to act, but it felt like as soon as I'd half got hold of that notion it was washed away by the urges as well as the fact it felt like it wasn't connecting to the rest of my self, the filters of good judgment usually in place were out of commission (which I didn't realize until after, of course), and so this one filter that sort of came up, never sank in because the usual behavioral filters etc. that were gone left the electrical cord, if you will, of this one nagging filter with nowhere to close the circuit.

It took me some time, and talking things out loud as we went home, and afterwards, to figure out I'd just been played like a marionette by the mania, and behaved in ways I'd NEVER have chosen.

Anyway, I'm always keenly interested in reading about stuff like this, how things can be overactive, underactive, turned off, bypassed, faulty signals or reception or both, signals getting crossed (stuff being sent to the wrong areas, maybe?) etc. because I find this kind of thing fascinating.

Much more fascinating than reading someone's story of how they went a bit unhinged at the clothing store. 8^P