Sentenced to the Max 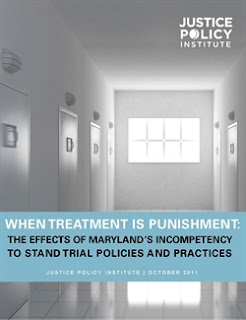 Even if you're not interested in forensic psychiatry, I'd encourage our readers to wander over to The Crime Report to read an article by my esteemed colleague Dr. Erik Roskes. He has written an excellent piece entitled "Sentenced to the Max Without Benefit of a Trial", about the role of prosecutors in the continued confinement of incompetent and unrestorable criminal defendants.


I can't do it justice in a nutshell, but briefly it's about criminal defendants who will never be well enough to go to trial. Although the law requires that charges eventually be dropped in these cases, in Maryland prosecutors are pushing the limits of the law to keep defendants in the hospital as long as possible. Amazingly, public defenders do not oppose or question this. As a result, increasing numbers of state inpatient beds are tied up by forensic patients who would otherwise be released if non-dangerous. (Dangerous incompetent patients could still be civilly committed even if the charges were dropped.)

This practice has recently been criticized in a Justice Policy Institute report published last year. Still, the practice continues.
Posted by ClinkShrink on Wednesday, July 18, 2012

Thank you for this, Clink,

Those who aren't interested in this subject might reconsider. The issues underlying indefinite confinement without trial run straight to our founding principles, including but not limited to Liberty, and Equality under the Law.

"What [incomptent to stand trial] cases amount to is the imposition of a maximum sentence (albeit to a hospital, not a jail or prison) with no trial, no finding of guilt, and no meaningful defense—based solely on the prosecutor’s discretion regarding dismissal."

I could not agree more

i was in the hospital with people who were waiting to be declared competent to stand trial, or who were ngi. some of the ngi people served longer sentences in the state hospital than they would have if they had gone to jail.

Quite often, the medical establishment is called up and responds to the call to punish those who do not conform to norms. What happens to people who have broken a law and are ngi is often similar to what happens to people who have not broken any laws but have breached social norms. Docs can act as agents of social control. Not all care to. Not all buy in. Enough of them do.

Anon pulls punches. Docs DO act as agents of social control, or worse, as agents of the State. This was not always the case. Sadly, we have arrived at a place where we expect physicians to behave this way, and physicians themselves are eager to comply

Rob, read my book. You'll love it. They're all there voluntarily. Very few meds.

Is Natick near Marlborough?

No time for books right now, Dinah, I'm finishing up my own (note to self: Never EVER sign a work-for-hire deal AGAIN!)

Marlborough is 11 miles from here. It is the third most-represented city in my practice (after Framingham and Natick)

Sure Rob, I pull punches if that is how you choose to look at it. Some doctors do advocate on behalf of patients. Some doctors are not trigger happy with the prescription pad.Some go above and beyond to keep patients out of traumatizing hospital environments.SOME. Not all. Certainly not the majority. To you that is pulling punches. To me it is being able to view the world in more than just black and white. No Rob, I am not a doctor/shrink. I just have lots of experience with them. It could be that there are some opinions that do not fit with yours but which are valid just the same. Have you ever considered the possibility (gasp) that there are people in the world who are as "smart" as you are, or give yourself credit for being?
Everything is a term paper for you. I'm living it. I finished my term papers when you were in short pants.

Wow! That's the first time I've been attacked ad hominem since Monday! I must be working too hard...

If you care to point out what part of what I said is illogical just because I do not agree with you or find you over the top arrogant, let me know. I can take you on, no problem. That's why I went spent so much time in school. Good luck with your book. Hope you negotiated a good advance. I made far less money with my publisher than I did in my day job. It has better be a labor of love.

Rob, download it for free on Sunday, you can read it whenever. I would appreciate it.
Do you know any reputable spas/ massage therapists? I want to give a give card to a stressed out friend up your way. She has an ulcer, so bourbon is not in the equation right now.

Dinah, email me at lindeman@natickpediatrics.com and I'll send you a personal reference to a friend who is a first-rate masseuse in Natick. I may be able to get your friend a deal if I contact her first.