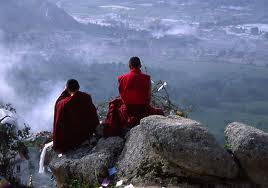 On my post on meditation, Guzman from Montevideo, Uruguay left us a joke. I mentioned in that post that my mother took me to learn Transcendental Meditation when I was 10. Odd coincidence, but my mother also worked at the US embassy in Montevideo, long ago. Did you know her Guzman? It was many decades ago.

So I took Guzman's joke and I modified it to suit us three Shrink Rappers because it kind of suited our personalities:
Guzmán. said...

“There are three shrink rapping monks, who had been sitting in deep meditation for many years amidst the Himalayan snow peaks, never speaking a word, in utter silence. One morning, Roy one of the three suddenly speaks up and says, ‘What a lovely morning this is.’ And he falls silent again. Five years of silence pass, when all at once a bird flies over and pulls the duct tape off monk Dinah's mouth and she speaks up and says, ‘But we could do with some rain.’ There is silence among them for another five years, when suddenly ClinkShrink, the third monk says, ‘Why can’t you two stop chattering?”

Ha ha ha Loved the duct tape on Dinah's mouth ha ha ha and Clink's closing comment. Kudos! You've nailed yourselves. Love it. To read you is to know you! You're on my blog roll. he he he