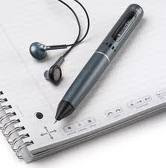 I'm not a big toy person (I don't think). I didn't stand on line for an iPhone, I don't have a Kindle---I actually read these old paper things called books, and I don't greet strangers with, "Wanna see my apps?" Roy and Clink like toys more than I do. But yesterday I was reading the New York Times magazine online (because my hard copy never came, but thank you to the judge who brought me hers) and I came across this article on the LiveScribe pen.

Oh, my: I want one. But for what? It would have been great when I was a student. I was an excellent note taker, but to have been able to re-listen to lectures on specific parts of my notes--that would have been really helpful. Now? I take notes during the initial interview with patients, and sometimes I reference those notes, but I can't say I ever have any desire to replay the whole interview, or that there are times when this would help with clinical care. Face it, cool toy, but I don't really need it.

So I started thinking about how a LiveScribe might be useful in psychiatry and this is what I came up with: it could help in psychotherapy supervision. Residents take process notes on sessions, but it would be cool to have them selectively play parts of the session. Oh, why not just record the sessions and play the whole thing? Oh, that would work, too, except that it never works. It's rare that a resident comes in with an audible audio recording of an entire session. Despite all the technology, the residents come with the same little cassette recorders that I used...and never worked...year ago.

As a patient there's no way I'd go along with a session being recorded like that. Notes are cool, but recording no way.

Doesn't something like that introduce all sorts of security hippa rule type issues? I know where I work has tons of rules about security on computers or databases with any PHI.

Those pens are super neat though. I want one.

I use an mp3 player with an audio/voice recording feature to record all my sessions. Early on, we used tape, but his tape player sucked big time, so eventually I got an mp3 player. I'm on my second one now, lol.

The recordings are for me, to re-listen to in-between sessions, to get more out of them, and it really helps, although it's hard to listen to myself.

And some sessions are really TOUGH to listen to, the ones where I'm sobbing alot and working through something tough. Or embarrassing. But it's worth it.

I've been meaning to do a post lately on what the thing DOESN'T record, like the depth of compassion in his eyes near the end of the last session, after we'd been talking about how I couldn't have any compassion for myself, as well as how I don't know how to cope with everything falling apart with my husband being out of work and we don't have October's rent, food running out, etc. You can't record the compassion you see. I can remember it, though, and it's one of the few things holding me together with spit and string, cause otherwise I'm a complete wreck.

I forgot to thank you for posting this fantastic blog entry.

I could have used this when I was in college also. Unlike you, I had alot of difficulty with taking notes for various reasons.

It will be added to my list of tech devices for possible purchase in the future.

I use one as a pre-med undergrad and if does help a lot, but I know from my hospital job that psychotherapy notes have a whole set of rules set upon them from HIPPA but I would think the security thing could be figured out. It would definitely help even as a psych tech when I am trying to get some quotes to write down for SOAP notes.

I did get one and love it.