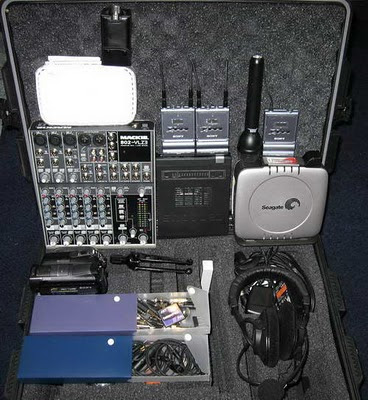 In this show we continue with our guest Dr. Pat Barta of the Adventures in Telepsychiatry blog.
We talk about electronic health information systems and Clink continues her rant which she started in her post Rage Against The Machine. Roy mentions the Certification Commission for Health Information Technology and the American Recovery and Reinvestment Act which provides funding incentives for doctors who use health information technology. We cover developing standards for behavioral health information technology, including personal health records which allow patients to store their own information voluntarily "in the cloud", on a server. Dr. Pat Barta talks Open source health record systems and information security.
Health Data Rights is an organization that developed a proposed declaration of rights for patient data. Another organization addressing this is SpeakerFlower, of which Roy is the spokesperson.
Dinah talks about her blog postWhat's An Emergency? and wonders how flexible psychiatrists should be when a patient says they need to be seen right away. Which situations are truly emergencies? What should you do if a patient turns down multiple appointments offered for that same day? Should your office voicemail tell people to call 911?
Finally, Dinah wonders what has happened in states with medical marijuana laws. She mentions KevinMD's blog post Medical Marijuana Has Doctors Asking Questions. Should marijuana be prescribed for attention deficit disorder? How do you do clinical research on a controlled substance?
********************************
Please go to iTunes and write a review.
This podcast is available on iTunes or as an RSS feed or Feedburner feed. You can also listen to or download the .mp3 or the MPEG-4 file from mythreeshrinks.com.
Thank you for listening
Posted by ClinkShrink on Monday, March 22, 2010

I'm glad to see the podcast is back! But the links for both this one and #49 take me to podcast #47!

The links are fixed on both posts---thanks

I have had a lot of concern about the electronic medical record, particularly when it pertains to psych records. For example, I have seen an electronic record where psych records are open to all physicians who treats a patient that's part of this hospital. I don't like that, and I wonder if the patients talking to a psychiatrist at this hospital are aware of that fact. I kind of doubt it even though I'm sure it's in the fine print somewhere.

If I had it to do over again, knowing what I know now, I would not have seen a psychiatrist who is part of a hospital that utilizes an electronic medical record. I just think psych records need to stay in the psych dept, unless the patient says otherwise.

Woohoo I got my TIVO to find you, under the podcasts, url. It wouldn't find the regular podcast rss, I had to go with the mp3 one, that I found on the mythreeshrinks.com page listed as an MP3 Feed. it had a -mp3.xml on the end of the mythreeshrinks instead of a 1.xml, which is on the regular rss feed. It's probably just that the TIVO wanted the MP3 version. But now it's in my favorites on the TIVO. Now I just have to figure out how to pause and unpause it so it doesn't go back to the beginning when I unpause it . . . . it says in small type at the bottom of the screen, "After track has started, you can press INFO to return here", and when I do that, it seems to pause it, at least the timer stops at whatever point I'm at and the sound stops; however, hitting INFO again does nothing (I can see the signal registering in the front of my TIVO unit though). Hitting pause, play, also do nothing. Hitting SELECT, stops the play. Hitting it again starts it over at the beginning.

So it looks like, for listening on the TIVO, there is no pause. At least, if you want to unpause it again.

Hrm. It's gotten to the point I first paused it at, 1 minute 27 seconds in, and I have not paused it, but it's not playing anymore . . . . this is wierd. If it is successfully accessing the internet to grab it, it should be able to grab the whole thing. I will investigate further, because since my computer has been, as I put it, devolving into a calculator, I'd risk it rebooting itself were I to have it play a podcast while I was doing anything else on it.

It is SO great to hear your voices again!

On a COMPLETELY unrelated note, in an attempt to distract myself from the impending doom, I mean impending surgery, If anyone is familiar with the TLC show, Say Yes to The Dress, I've gotten into that lately. I'm going to post pics on my blog one a day of ones I tried on way back when and people can "vote" for the one they think I picked in the end, and comment on them (the dresses, not my figure, some of the dresses ARE rather ridiculous, heh).

Since most of the people I know that read my blog are either from here, or are family, and family can't vote cause they know which one. They can comment, in certain ways, though, lol.

And yeah, I'm working on changing my attitude about the surgery, but I almost killed myself a week ago over it so, um, it's a work in progress (yeah, psychologist knows, and I'm not capable of doing myself in I learned, and I'm the one who chose this, and it's a good thing, and I need it, and yada yada, except the panic talks, and and and, thus the needed fun distraction of wedding dresses.)

Am I going nuts? Yes. You are what you eat. More pistachios and almonds?

Should I be this candid? Why not, it's the truth. And I'm in a different place now, anyway.

Oh! I just noticed something. The TIVO only pulls up through episode 46, Fugetaboutit!, so I don't know if that one has a problem at about the 1 min 27 mark on the mp3 feed or not.

Well the mp3 FEED only has up through 46, fugeddabouttit, so I figured out THAT problem, but still haven't figured out why I'm only getting a little over 1 minute of the program (on my Tivo, in Podcaster under the showcases, music, etc. section of things on it, I put in the url for

that feed. as found on the following page:

otherwise, an mp3 FEED isn't mentioned anywhere, but it was the only version my TIVO would pickup, if only the first minute and a fraction (durn thing, still trying to figure it out; if it is accessing the internet enough to grab it at all, why not the whole thing?). Guess it didn't like the mp4 version on the regular rss feed.

It sounds funny to hear you guys coming out of my TV though. Hee.

I thought I was well on my way to becoming a Geek, but no, Sarebear has out & over & ultra geeked me back into my cave, the one with the corded landline and the TV with rabbit ears.