A Movie For ClinkShrink 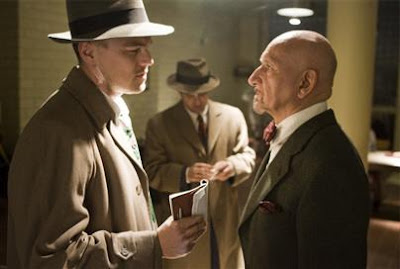 Perhaps the most disturbing movie I've ever seen.

So we start with the ferry ride to Shutter Island where two federal agents are headed to a a particularly creepy hospital for the criminally insane to search for an escapee--- a mother who drowned her three children and who has now "evaporated" from her locked cell. The story revolves around the haunted character of Teddy Daniels (Leonardo DiCaprio) whose flashbacks and dreams pave the story: his role in the liberation of a Nazi death camp & the horrifying death of his young wife in a fire. The movie is dark, it is set on an island during a hurricane, in a hospital built during the Civil War, with Ben Kingsley in a bow tie playing the polite but devious head psychiatrist. In every scene, things are falling: rain, snow, papers swirling, ashes, unknown particles. It's compelling and confusing, all at the same time. The plot twists and weaves, and by the end the reality was a bit of a jumble. What really happened? We didn't agree, and when we caught dinner after, the couples at the next table were having the same discussion.

Not exactly a positive view of psychiatry, but this one was so much about the twists of the plot, that it hardly seems worth worrying about the portrayal of our profession. And "disturbing" : the storyline itself was not terribly disturbing, but the images of dead children left me very unsettled. I'll leave the full analysis to ClinkShrink....and no plot spoilers here.

Email ThisBlogThis!Share to TwitterShare to FacebookShare to Pinterest
Labels: movies

I'm still left with more questions than answers too. As a mental patient having done time in regular mental institutions (as opposed to prison hospitals), I was identifying with the patients and you-know-who more so than the authority figure characters. The theater was packed, they were showing it on 2 screens, yet I felt like I was the only there who knew what chlorpromazine was or who'd had it. And I also suffer from terrible migraines, so it was cool to see that portrayed (an aspirin won't cut it, Leo).

Anyway, I love Scorsese. Am glad he came back to Massachusetts to film. Oh, and I saw in the credits that the role of "Woman in Manacles" was played by Jill Larson--that's Opal of All My Children fame. Good makeup job because she looked scary (thinning hair, sunken eyes--was that from psychotropics, ECT . . . or Dachau). Hope I didn't spoil anything.

the book was so bad that i didn't even consider the movie....sounds like i didn't miss much.

I work in a Boston law firm. I was cleaning up a box of junk and I found doctors' CVs from 1983 or so. Dr. Lester Sheehan's was in the pile. For real! He was an orthopedic surgeon at St. Elizabeth's Medical Center in Boston. Dennis Lehane always uses the names of real people he's known in his books. Perhaps one of Lehane's kids broke a leg and Sheehan fixed it. . . .