Memorial For A Brain 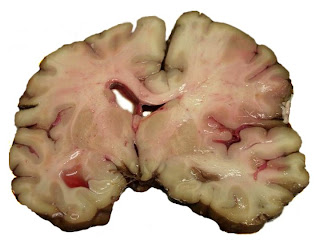 When I was in medical school I was fascinated by neuroanatomy and neuroscience. I enjoyed reading popular science books like Broca's Brain and The Three Pound Universe. I liked reading about the classic clinical cases studies that taught us a lot about how the brain works---cases like Phineas Gage, the Nineteenth Century railroad foreman whose brain injury revealed the purpose of frontal lobes, or the case of H.M., the man whose temporal lobectomy taught us about the how memory works.

Patient H.M. had parts of both his temporal lobes removed in order to treat a seizure disorder. After the surgery he was unable to form new memories at all, and he became one of the most-studied subjects in the field of neuropsychology. From H.M. we learned that there are two types of memory, declarative and procedural memory. Declarative memory is the what we use when we learned facts. Procedural memory is what we use when we learn how to do things, like brush our teeth or ride a bike. H.M's temporal lobectomy destroyed his declarative memory, but his procedural memory was left intact.

I'm bringing this up now because of an article in Wednesday's New York Times, "Dissection Begins on Famous Brain". Patient H.M., whose name we now know is Henry Molaison, died last year and donated his brain to a neuroscience project at M.I.T. They are in the process of sectioning his brain to learn more about what went wrong with it. There is even a web site, the Brain Observatory, where you can watch the sectioning as it happens.

I read the story and checked out the sectioning web site, but my reactions are mixed. As a psychiatrist it's fascinating to see that we can study a lesion from an individual patient all the way down to the microscopic level, but as a human being it leaves me feeling rather sad for this guy. It was noble of him to donate his brain, and years of his life, to science but on the other hand I can't help wondering if he ever just wished people would leave him alone.

Posted by ClinkShrink on Friday, December 04, 2009

One must put one's best 'foot' forward. If it so happens that your most compelling quality is that you're an interesting specimen... Well, the show must go on.

Have you heard "Hymn of the Medical Oddity" by the The Weakerthans? Perfectly captures the sentiment behind the last line of your post.

It can't be repeated too often: Phineas Gage *did not* reveal the function of the frontal lobes -- there was too little known about what he was like before or after his injury. What happened (in brief, rough sketch) is that writers simply painted onto this "empty canvas" whatever theoretical picture they preferred. Early on, that picture was one of no mental changes; as localization later became ascendant, the picture changed to "behavior altered." Even today, almost everything written about Gage's post-accident behavior (drifter, violent, didn't work -- all completely unsupported) is simply projection onto Gage via the (unstated) reasoning that Gage should have displayed symptoms similar to those seen in mondern pts with similar injuries (though for that matter, we have only a very appoximate idea of the location of Gage's lesion anyway).

However, Gage did get people *talking* about the frontal lobes, and that was important. See Macmillan, "Phineas Gage: Unravelling the Myth," http://www.thepsychologist.org.uk/archive/archive_home.cfm?volumeID=21&editionID=164&ArticleID=1399

As to whether H.M. ever "just wished people would leave him alone" -- I doubt it, since every visitor seemed fresh and new to him, no matter how many times he'd met that person before.

H.M. is just the sort of case that causes me to distrust proposed experimental brain surgeries as a solution to various psychological problems. Yes a lot was learned from studying H.M.. Doesn't anyone shed a tear for H.M.'s lost life? Who wants to volunteer to lead a life like H.M. following experimental, overly-optimistic brain surgery? What would lead his surgeon to perform such surgery? Surely the surgeon knew there were huge risks.

Thank you for this amazing link! I didn't even know this site existed! I just wish I had checked it out sooner, would have loved to see the live stream!