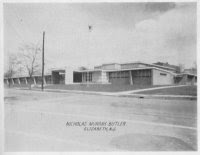 It used to be, in the good old days, that people lived life sequentially. You moved forwards. Not completely-- we take pictures so we can look back and remember, and save a bit of the present for the future when it will then be the past. We go to class reunions, save mementos of special occasions, hold on to love letters, treasure bits and pieces of the past, and here and there, we reconnect with someone from another time and place. It grounds us, forms some connection, gives us a sense of history and meaning.

And then was the Internet and we all Googled and Oogled and found lost lives and reconnected via Email.

And there was Facebook and the past and the present are now one and the same. We live stuck in time and I'm never sure which direction I'm going. Reconnection is the rule-- I have Facebook friends from kindergarten. A few years back, I got an email from my prom date-- "Remember me, the guy in the tux 25 years ago?" Okay, it was fun. Last night we chatted on Facebook. He landed where I thought he would land (sequencing DNA, if you must know). I then found a page for my elementary school. The school name was spelled wrong and the street name was also off, but the photo...no doubt it was my elementary school. The FB members were talking about the teachers, trying to remember them all. I'd forgotten about Mr. Firestone, the 4-6th grade gym teacher. But they forgot a lot of other teachers-- I was tempted to join so that Mr. Trogler wouldn't be lost-- but did I really want to? Shouldn't I be spending time on things that move me forward? There's that book to write (oy)...dogs to walk...laundry to fold...endless paint swatches to try for my new office. Instead, here I am chatting with my prom date, thinking about Mr. Shannon --my 5th grade teacher who had us write about an invention. My invention: a machine that would type what you said-- he told me it could never be done. That and growing hair on a bald head...oh for Mr. Shannon to have met Rogaine. The things I remember. I know what's happening in the lives of my friends far and wide (Laurie's mom read to her son last night, photo on Facebook; Joan's foot hurts; my second cousin unwittingly set her alarm an hour early and didn't realize this until she was outside waiting for her ride at 6 AM...). Connection is good, but when does it become too much?
Posted by Dinah on Wednesday, December 02, 2009

Great post! I agree with alot of what you say here.

Me, I have too many schoolyard scars yet that I haven't worked through, like being shoved down in the mud in front of teachers and having them say, "Oh, he's just jealous that you scored higher on the math test" when I complained, a rarity for me, for me to want to even go there.

I must confess that I HAVE been curious about where some of these bullies have ended up in life - if any of them kept on the "mean" personality track or if any of them grew out of it.

But so far, I've stayed away from Facebook, although my in-law siblings wonder why I'm the only one who's not on there. Me, I wonder why they all (except 1) abandoned their blogs when way back when I started mine part of the reason was because all the in-law siblings had one and so we could stay in touch that way.

Now, though, I'm wishing I'd never let any family other than husband know about the blog, but the way it was started kind of eliminated THAT possibility.

How funny; I thought your elementary school looked a lot like mine, then I noticed it was also in NJ (like mine). I can't really read the label, but I could make out that much. It looks like a different town, though. I guess that was the mid-century style for school buildings in that part of the country.

Sarebear, just to respond to a tiny point you made, I think there was a moment in time when everyone was enthusiastic about doing personal blogs, and then everyone moved on to social media like Facebook. Since you're apparently a "late adopter," like me, by the time you were to get on Facebook, chances are people would have moved en masse to some other medium.