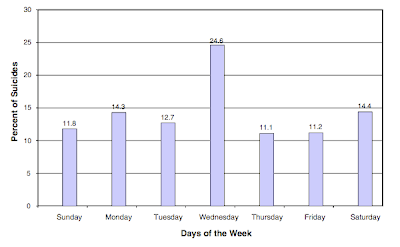 In the recent issue of Soc Psychiat Epidemiol, authors Augustine Kposowa and Stephanie D'Auria from the University of California review U.S. death certificate data from 2000-2004, and find that suicides are twice as likely to occur on a Wednesday than on a Sunday. No clear reasons why, but it is tempting to speculate.

They also replicated previous findings that Spring and Summer are more deadly than Autumn and Winter, whites are at higher risk than minorities, and that men are three times more likely to die of suicide than women.
I looked up the origin of the word Wednesday (from Woden's Day). Woden was an Anglo-Saxon god, thought to be the entity responsible for carrying off the deceased's soul to the next plane. (See also Dead Like Me).

The full-text article is available as open access here.
Posted by Roy on Sunday, July 12, 2009

Email ThisBlogThis!Share to TwitterShare to FacebookShare to Pinterest
Labels: suicide

I never liked Wednesdays, either. So now that we're riding a horse named Morbid, here's a question: is it true that more people die during "the hour of the wolf"--the hour just before dawn?

Have you watched TV on Wednesday? That would drive anyone over the edge.

Interesting. I had no idea. I'd love to hear your thoughts about why.

Wednesday is like in the middle of the working days. "Far away" form the weekends...

Also, I thought you might be interested in this CME event which is sponsored by University of California at San Diego:
http://www.cmenetworks.com/cme/9877/1/Continuing-Medical-Education-Psychiatry-CME-World-Congress-of-Psychiatric-Genetics-Surfing-the-Wave-of-Discovery-From-Genome-to-Clinic-UCSD-School-of-Medicine-San-Diego-CA-November-4---8-2009/Page1.html

This opportunity looks fabulous and good for clinicians with an interest in the latest advances in Psychiatric Genetics. They are going to cover the latest results in genome wide association studies, next generation sequencing, gene x environment interactions, epigenetics and many other aspects of psychiatric genetics.

Hopefully you will find it interesting.

Wednesday was the worst day of my week, but only because I had a standing event I didn't want to go to, so I missed it, and then I felt bad about missing it. Or was it yesterday when my entire 10 solid hours of the day's creative work was laughed at, denigrated, and dismissed by someoneI wish I could call an unusually surly boss whose opinion I don't respect anyway? Nope, today sucked more. Go figure.

Alls I know Tuesday and Wed are my least favorite, and byThursday I'm home free.

I like wednesdays. I can't expain why, but I always try to make wednesday a good day. That's probably one day out of the week that I'd chose not to kill myself.

Actually, a sunday doesn't seem like that bad of a day...