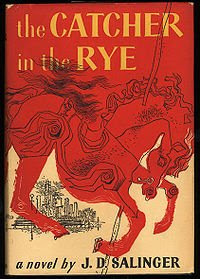 There's a copy of the DSM-IV sitting on my coffee table. Not the usual, not even at a Shrink Rapper's house, but I'm trying to write the Shrink Rap book and, in theory, I may need to look something up.

So, kid looks at the DSM and informs me, "We read that in English class today." They read the DSM in English class? Hey in the good old days, we read Macbeth in English class. We didn't need psychiatric diagnostic manuals. "Oh, why?" So they're reading Catcher in the Rye and they decided to diagnose Holden Caufield. Interesting. What's he got? Oh, we shrinks don't do that. Until I personally examine Holden, I'm not venturing a guess as to his psychiatric diagnosis. The APA and the medblogging community would have me de-shrunked.

Funny, I was writing today about how hard it is to diffentiate developmental issues, family complexities, and psychiatric illness in adolescence. Seems like a funny coincidence.
Well, what's Holden got?
Posted by Dinah on Wednesday, May 27, 2009

In my high school english class the teacher told us he had depression. Seems like the collecting diffrent diagnoses here is echoing the real world where everyone has their own opinion. When I get asked my diagnosis I usually say that it all depends on who you ask. And then I end up giving a massive list of contradictory diagnoses.

Circa 1970, my high school English teacher assigned us to use the then best-selling book Psychocybernetics by plastic surgeon Maxwell Maltz to "psychoanalyze" Hamlet. The guidance he offered us in that endeavor was quite bewildering, and I was left thoroughly confused (but got an A.)

I think my English teachers would have gotten into trouble for assigning Catcher in the Rye in those days--it was the sort of book we read surreptitiously on our own in a rebellious underground way. I remember being rather bewildered about it as well.

My mom gave me that book to read when I was going on a band trip and my bigger question about the book has been, 'Why did she give me that book?' I guess it allowed a psychiatric vocation. The question as to Holden's 'diagnosis' arises in part because of the hyperacuity in his perception of being 'phony.' He is sort of an 'idiot savant' in that area? And the book is sort of a religious call for not deceiving people and for rescuing those who are losing themselves because they sought truth in objects which were, as in a famous experiment of raising monkeys, wire mothers. This of course implies that Holden had the same experience and had difficulty reaching an object or other person. Holden has this obsession, but it is not an OCD. As an adolescent, before he can have a self that can be an object in relation to others it has to have complete purity that finally he sees as a Catcher in the Rye of the lost. Depending on how it goes, he could become a paranoid or an empathetic Supreme Court Justice. Becoming a psychiatrist would probably be too mundane though being a writer might somehow fit.

I agree with Grumpy.

Life itself can make one feel bitter and alienated -- no need for a diagnosis.

If I remember correctly (it's been a bit), Holden is telling his story from a psychiatric unit. Whether or not he "has" a diagnosis (and I'm still not going there), he'll need one if he wants his insurance to pay for his hospitalization (at least in 2009). "Teenage angst" isn't reimbursed very well.

Half the problem, I wager.

Commentary on Catcher in the Rye: