I Am Not A Beauty Queen 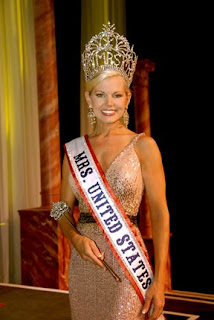 I was doing productive work, I really was. I was doing some Internet research when I stumbled over this:

According to the APA-sponsored web site Healthy Minds, Dr. Gariane Gunter (a third year psychiatry resident) ran for Mrs. South Carolina and later Mrs. United States on a platform (beauty pageant contestants have platforms??) of advocacy for people with mental illnesses. Now let me say right off the bat that I think it's very cool that she is publicly speaking out on behalf of our patients and doing what she can to call national attention to the problem of psychiatric stigma. She's also participating in a program to teach children and teenagers about psychiatric disorders, an important project given how many are afflicted with them and how cruel teenagers can sometimes be to anybody who's 'different'. Dr. Gunter wants to become a child and adolescent psychiatrist.

My other thoughts about this were two-fold. First, if I were a patient would I want my doctor to be a beauty queen? Ugh, I'd feel obliged to put on makeup for every appointment and I don't wear makeup. (What is it about makeup, anyway, that psychiatrists seem to equate this with mental well-being in women? You always see a mental status exam that notes whether or not someone is 'neatly made-up', as though the use of cosmetics actually meant something diagnostically.) The other thought I had was: 'Wow, and we obsess over revealing too much to our patients in a blog!' I wonder how her swimsuit competition photos went over on the ward, or how this will affect her future private practice. I already know how it would go over in a correctional clinic.

My third and final thought (OK, I had three-fold thoughts. I'm on a roll.) was about the irony of a psychiatrist participating in a beauty pageant while simultaneously educating the public about teen psychiatric disorders. I mean, aren't anorexia and bulemia going to be issues in this audience? Does it send the right message to equate success with physical beauty, while cautioning people about eating disorders? Am I stretching the issue way too far and need to chill out?

All thoughts welcome. I'm going back to work now.
Posted by ClinkShrink on Tuesday, November 25, 2008

An acquaintance said that when she received a liver transplant (waaay back when it was just barely no longer experimental) and the nurses helped her put lipstick on "to make her feel better."

So I guess this idea of being 'neatly made up' can be found in other areas of medicine.

We're back to the idea that shrinks are people, too.

I always worry when the medical reports I read say something like 'a genuine man/woman' - I mean, what does a fake man/woman look like?
And 'neatly dressed and articulate' - I mean, does that make a difference to the authenticity of my health problem?
A bunch of other euphemisms:
- 'professional tattoo' indicating this person is not a jailbird
- 'well-nourished' - ie overweight
- 'slightly tangential historian', hmmm 'I can't make out anything they say'!

She is a mother with perfect abs and her body mass index looks good to me.

I vaguely recall something about sweatpants pulled up too high, and a jelly-stained t-shirt...

Have a wonderful holiday, x3 of you!

That was my exact thought - let me guess, she specializes in eating disorders?


And yeah, what does "genuine man/woman" mean? I've never seen that one.

I'm with you, Clink. This beauty pageant thing just helps perpetuate society's shallow and sexist social values. I hate the fact that women are judged and valued based on physical attractiveness. You don't see boys being encouraged to put their looks ahead of intelligence, personality, fitness, hobbies, etc.

One of our kids was approached about competing when she was younger, and we said "absolutely no way are our children going to be taught to focus on superficial and trivial matters like physical appearance."

Personally, I'd have some reservations about sending one of my daughters to a beauty queen/psychiatrist.

If an attractive professional woman wants to model a healthy BMI who are we to judge? Maybe girls will get the message that they can be beautiful and a healthy weight at the same time. BTW, the male equivalent of the beauty pageant is probably athletics. I'm always amazed at the number of parents whose acceptance of their child is based on how he did on the football field. And then there are the parents who bring their normally-developed son to the pediatrician for growth hormone so he can get an advantage in little league. Narcissitic parenting is not confined to just daughters.

Maybe girls will get the message that they can be beautiful and a healthy weight at the same time.

Maybe girls need to get the message that physical beauty isn't as important as society would have us believe.

I'm not opposed to an attractive woman modeling a healthy BMI (although I'd rather see an athlete with a healthy BMI as a role model for young women); I'm opposed to women trotting around the show ring like pedigreed dogs, winning prizes for appearance alone. I object to women being valued for their looks above all else -- I object to the message that style trumps substance.

Narcissistic parenting isn't the issue here so much as perpetuating sexist values, imo.

I know my psychiatrist specifically took note of the clothes I was wearing and how well put together I was, becuase he mentioned it. However, he said that I "must" be feeling good because I looked good and was "dressed up"

That day when I saw him I was in a horrible state of mind, and he missed it because he was focused on my clothing and how well put together I was. Later that night I was admitted to the hospital.

or maybe it was just the way I was raised. Cause no matter how I'm feeling I leave the house dressed nicely. (though I don't ever wear make-up) Actually for me if I'm feeling worse or ill I tend to dress up because it gives me more energy.

I'm I weird like this? Cause even when I was in the hospital I would dress up and straighten my hair.

I witnessed the whole make up = not depressed thing once as a student. The woman was suicidal and the nurses spent some time that morning keeping her spirits up for the ward round and giving her confidence to tell the doc how bad it was in front of a ward round of 10 or so other professionals. As she left - "Sister" spoke up - "There's no way she's depressed with all that make up on" Sister was effectionately known as the "ice-maiden".

I don't get a bad reaction seeing her as a Mrs USA other than the fact such celebration is primarily on her outer beauty rather the inner beauty. I note the stakes are getting higher - in decades gone by it was sufficient for Miss Pageant to state "I want world harmony" - it seems the level in which they are expected to participate has escalated somewhat.
I'm thinking that along this line - how long before we vote our UN reps in via Beauty Pageant competition?

I'm with Clink Shrink on this. Serious wondering about how the swimsuit photos will go down with some of the less well-controlled men! But maybe being a beauty queen gives you insider knowledge about eating disorders and the pressure to conform to external demands ;-) I know a psychiatrist who wears extremely eye-catching thigh-high boots to a lock-up ward. Maybe she likes the attention ...

It is interesting that in this case, promoting a healthy BMI (as our psychiatry queen is purported to do) is seen as an affront to public health rather than as supportive of it. Anorexia/Bulimia are 2 of the very unfortunate consequences of a society which values low BMIs but makes those BMIs very difficult to obtain. This being said, I wonder if the public health impact of the "desire for thinness" is a net benefit? (disclosure: I could lose a few pounds)