A Brief History of Shock Treatment 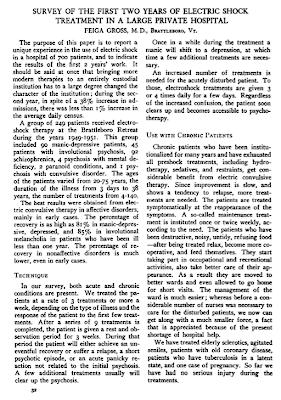 Dinah's post about the new movie, The Changeling, generated some discussion about ECT in the comments (Angelina Jolie's character got electroconvulsive therapy in 1928, nine years before the first published description), started by Romeo Vitelli who asked, "Did they have ECT in 1928? I was under the impression that it was first developed in Europe in the 1930s."

Electroconvulsive shock therapy was discovered by Ugo Cerletti and Lucio Bini in Rome, in 1937.

Source:  The History of Shock Therapy in Psychiatry

Apparently insulin-induced coma was all the rage in the late 20s.

And didn't Francis Farmer (and a whole bunch of other people) get an ice-pick lobotomy from a psychiatrist in the 1950s?

Psychiatrists of yore performed some pretty barbaric treatments on their patients.

It seems the movie took some liberties with "the truth," though. No surprise there.

Anon is right about 1937 being the first description, though it must have occurred earlier for them to write about it.  But other types of "shock" treatments were used before electricity (as in "a shock to the system").

Insulin shock treatment was first described in 1934 by Manfred Sakel, according to my 1948 third edition of Samuel Kraines' The Therapy of the Neuroses and Psychoses.  Insulin was used to induce a "therapeutic coma," usually daily for 15-30 days and lasting 30-60 minutes. Occasionally, the coma resulted in a convulsion, and it was found that these convulsions resulted in improvement, spawning many different "treatment" pathways to achieve these therapeutic convulsions.

Kraines (p487): "There may be convulsions present during the coma; but contrary to Sakel's fears, these convulsions are usually found to be beneficial to the patient. Indeed, some authors give metrazol or use electric shock for patients who are in insulin coma." (p493): "... [other] agents include ... picrotoxin, coriamytrin, azoman, ammonium chloride, camphor, methylguanidine and others."

Metrazol was first introduced by von Meduna in 1935 for schizophrenia, the same year that Moniz and Lima from Portugal described prefrontal lobotomies.
As for the therapeutic use of electricity, well, speculations started almost as soon as electricity was discovered to affect tissue in the late 1700's. 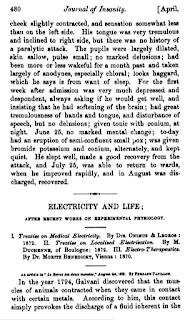 From "Electricity and Life", a translation of three French articles by Fernand Papillon in the Journal of Insanity from 1873: "It is for this reason that the diseases which have their seat in the encephalon are particularly easy to treat by electricity. The latter, wisely applied, is a sovereign remedy for cerebral crises, delirious conceptions, headache, sleeplessness, etc. The first physicians who made use of the electric current understood perfectly the happy influence of the galvanic fluid on the disturbances of the brain; they even thought to use it for the treatment of insanity. Researches have not been continued in this direction, but the facts published by Hiffelsheim authorize the opinion that they would not be unprofitable. These facts show how much service the electric currents, but the constant currents only, will some day be able to render in cerebral affections. This is a point to which it is important to call the attention of alienist physicians." [alienist=psychiatrist]

I haven't seen the movie yet, but I guess they must have wanted it to be in 1928 (because of stock market crash?), so they took artistic license on when ECT began.
Posted by Roy on Tuesday, November 04, 2008

Well, I know nothing about ECT, but the movie is based on one of the Wineville Chicken Coop Murders from 1928, so that's why it was set during that time. Nothing to do with the Crash. ^_^

ECT is a strange animal--it is among the oldest of biological treatments, and is notoriously controversial, and yet a surprisingly large number of people have no idea of its persistently widespread use ("they don't still do that do they?). The latter is unlikely to change since nothing else treats severe depression remotely as well.

I suppose amphetamine (first used clinically in the early 1930's) is the only regularly used treatment as old as ECT. Come to think of it, it's awfully controversial too due to the ADHD issue. Such dastardly treatments, and yet we can't find anything better.

See I knew you were all aliens!

novalis: Don't forget that ECT is also at least as effective as most drugs in acute manic, mixed, psychotic and catatonic states.

As I often say, if we understood how ECT works, we would understand mental illness.

Unfortunately, there's little research because it's so controversial. It's hard to get a grant to study something that most people have only heard of in the movies.

I have documented cognitive deficits from ECT and wish that this would be considered. I am or should say was a well respected doctor before this happened to me. I had neuropsychological testing and saw a neurologist who said I had cognitive decline due to ECT. I had a history of concussion x2 and other risk factors that I should have considered and that put me at risk for damage from ECT. Just thought consideration should be given to risk factors before jumping in with ECT.