Fat Doctor asked a question which is analogous to a pop fly to my infield. I'm calling for the ball. The question was: Why do people confess to crimes they didn't commit?

Here's an even better question: Why do people confess to crimes at all?

First, let's cover a little history regarding the making of confessions. In the Middle Ages the law was divided into secular and ecclesiastical law. Church law or ecclesiastical law placed a heavy emphasis on confession as a means of absolution and to restore the offender into church society. In the Twelfth Century it became a requirement of the Roman Catholic church. Later in the Fifteenth Century, with the onset of the Spanish Inquisition, confession became a means of enforcing dogma and to punish deviation from church leadership. (Altogether now all you Monty Python fans: "No one expects the Spanish Inquisition!") On the secular side of things, in 1215 the Magna Carta established the beginnings of the modern judicial system with a requirement for trial by one's peers and the use of judges. In modern times this eventually morphed into modern criminal procedure which included a defendant's right to enter a plea and protection against self-incrimination. Miranda warnings came about as a way of preventing self-incrimination.

When judicial procedure was first adopted in the Middle Ages the defendant was required to enter a plea to a criminal charge. The plea had to be entered before any prosecution could take place. Not being totally stupid, the criminals did the most logical thing to avoid punishment: they would stay silent and refuse to speak a plea. The courts dealt with this by putting the defendant on the ground and laying stones on his chest until he either entered a plea or died. This is the origin of the modern colloquialism "to press for an answer". There were other interrogation techniques which are best left to the imagination.

In Colonial America the Bill of Rights forbid such things in the Eighth Constitutional Amendment against cruel and unusual punishment. (Note that not everyone was in favor of the Eighth Amendment. When it was being debated the senator from Virginia declared that "brigands deserve to be whipped. Or perhaps to have their ears cut off.") So physical cruelty was out when it came to extracting information from defendants. In modern times police are legally allowed to use just about any means short of physical abuse to interrogate suspects and extract information. Interrogation has become a science in and of itself, to the extent that an Amazon.com book search on the term 'police interrogation' will net you over two thousand results. Eesh. (Interestingly, a search on the term 'civil rights' will net you over 69,000 results. The balance is still in the right direction.)

The best practical man-on-the-street description of a police interrogation I've ever read was in the book Homicide by David Simon, based on actual observed homicide interrogations. This is how he describes the role of the police investigator:

"He becomes a salesman, a huckster as thieving and silver-tongued as any man who ever moved used cars or aluminum siding---more so, in fact, when you consider that he's selling long prison terms to customers who have no genuine need for the product."

(That man can write. You really have to read this book. He's now a writer for the HBO series The Wire, based on the book of the same name written with former homicide detective Ed Burns.)

Investigators, like psychiatrists, learn to establish rapport. They learn to conduct and control an interview. They learn how to collect information and then present it back to the defendant in a way that elicits more information. And they learn tricks---how to lie to a defendant to convince him that it's in his best interests to cooperate, or that his co-defendant has already 'turned' and is ratting him out, or that by confessing others will be protected from full prosecution. 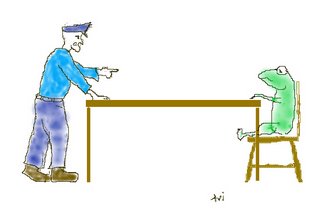 While the investigators are trained and skilled, the defendants are...well...not. You know all those 'dumb criminal' stories you read or hear about in the news? Defendants really are like that. On average, they're not too bright. They use bad judgement. They may be juveniles or mentally ill or in substance withdrawal at the time of the interrogation. These impairments can lower resistance to interrogation. They might have personality traits that make them susceptible to certain interrogation techniques: someone with a need for admiration will be interrogated by using flattery; a dependent person with a desire to please will want the detective to be happy with him. Antisocial folks may enjoy bragging about their crimes---like the serial killer who confesses to a few extra murders just to raise his personal body count. Finally, some criminals really do experience remorse. Confession, in the true historical and religious sense of the term, is a relief to these folks. (See? The history part was relevant.)

So this is why people confess. Phew, I've typed myself out.

Now, for those of you who feel compelled to act on what I've presented here I am providing a link for your own personal online confession site. Trust me, it will go easier for you if you tell everything.

Posted by ClinkShrink on Thursday, August 31, 2006

To Fat Doctor:
See, I told you she was easily inspired to wisdom.

To the World:
ClinkShrink was my friend first.

For the Record:
Whatever it is, I didn't do it and I want a lawyer.

You've already confessed about the giblets. But what have you done with Roy?

I'm so sick of that chair: You and Foo just love those chairs with creepy lighting. I "added" to your post. You're welcome.

Roy was alive yesterday. At this point, I believe he's hooked up to assorted tubes which allow him to do psychiatric evaluations around-the-clock without interruption. Now that that's been clarified, his wife has arranged to have his photo taken off the milk cartons.

I did nothing wrong with the giblets. They were a gift to your cats.

Why is Kermit being interrogated? Has something happened to Miss Piggy? What does this mean for the Shiny Happy Hair Scale?

the caption read, "don't even try, we saw you touch those tadpoles." I didn't think it added much.

I am in absolute awe and humbly bow to the historical musings of ClinkShrink. I know you don't do therapy, but do you give private history lessons? That was beautiful. I'm without words to thank you for such a timely post. And also, dang, girl! U R SMAAAAART!

Thanks Fat Doctor; I feel like I've just hugged a kitty.

I wanted to confess that your sister and friends are groupies to hyperthyroid 28 yr old blues players. ButI can't make the link to a very bad picture work. Guess I'll just email!!

What happened Hedberg---did Jonny Lang get too old for you?

And there's someone on the next post trying to give away kitties. You need a few thousand more I think.

I must plead a dissociative moment (week?), because I missed this post completely.

I have written about my friend, the Deputy District Attorney, and I am in awe of her "communicative" skills. Her discussion of "sit downs" with calculating individuals who stop at the razor edge of incrimination is enthralling. But it is she who instructed me to, "never, ever speak to the police." I clarify this to mean, if you are a person of interest to the police. As my colleague who recently testified in a trial discovered, the average person is not prepared to deal with professional "examination." If I were asked, "Do you know what time it is?" I would answer "8:45 pm," when in fact, the correct answer is, "Yes, I know what time it is."

As you note, and which for me is completely unexplainable, the police are allowed to purposely lie & deceive you; "You need to come downtown with us..." (you don't), or telling you they have evidence against you that, literally, does not exist (e.g. fingerprints, witnesses, etc.). I can only imagine the average person's thought process: "If I don't go/talk/defend, they'll think I'm guilty. I have nothing to hide." Lawyer up! You're dealing with professionals.

I loved the book and the TV show (Homicide: Life on the Street was the best show on TV), but they were also the reason I never stopped in your fair city. But now, I may reconsider...

Fortunately, the vast majority of interviews and interrogations conducted by the police are conducted professionally and ethically. Also, we must remember that although people occasionally do confess to things which they didn't do, false confessions are a small factor in wrongful convictions based upon statistics from the Innocence Project (15-20%), whereas incorrect eyewitness identifications are the main factor in about 80%. Furthermore, any confession should be corroborated with other testimonial and physical evidence developed during the investigation.

I think it is the wrong advice to say that you should never talk with the police. I have been in law enforcement for 20 years and I am a detective sergeant with a state police agency in the USA. I also teach interview & interrogation and statement analysis techniques to law enforcement and private sector investigators. Our goal for any interview or interrogation is to find the TRUTH. If people refuse to cooperate with the police, it will make it much more difficult to find the truth.

I think the character of police officers varies widely from region to region. I am the kind of person who will not talk to the police/open the door/get out of the car. My perception is that police lie to score what they want.