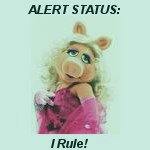 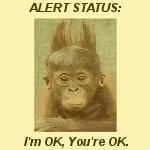 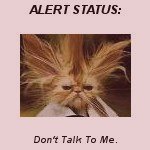 I understand that ShrinkRap owes Shiny Happy Person a fair amount of money for the great idea of a hair-related mood scale. Well, here it is. In lieu of royalties I am offering this ready-to-use instrument for all those affective disorder researchers out there.

The hair scale is based in part on the Homeland Security threat levels. The lowest threat level has a blue color code and is represented by Miss Piggy with her luxurious, extravagant looping curls. Miss Piggy is in a great mood, as illustrated by her motto "I Rule!". The neutral threat level is yellow and is represented by a quizzical, placid monkey with gentle wisps of hairy optimism. He is euthymic and accepting: "I'm OK, You're OK". The highest threat level, the red level, is shown by Frizzled Cat. Frizzled Cat has been dunked in a vat of flea dip and and blow-dried to maximum intensity. Frizzled Cat will attack with little or no provocation. Don't even think about stopping to schmooze.

Women everywhere can now warn their husbands and boyfriends what to expect just by slapping one of these on their foreheads. Or wear it to work to warn away those annoying co-workers that it's time to go back to their cublicles.

Then I started thinking...I do this occasionally.

Wouldn't something like this be a great way to assess mood in preverbal children? After all, children learn to recognize faces and identify emotions long before they can put a name to them. Max is pretty good at identifying human emotions and he can't even talk much less write a novel. All we need is a nice range of simple iconic human facial expressions and we're set to do research in children's affective disorders. It would be much easier than the Kiddie-SADS. Then again, it's such a good idea it's probably already been done.

Why stop at preverbal children? If it's good to catch the disease process as early as possible, why not neonatal mood scales? The Shiny Happy Hair Scale has relevance here---I can see the NICU progress notes now: "S: 'Goo goo wah...' O: Patient has full head of wavy curls. A: Incipient mania P: Start lithium". I can see this incorporated into the Apgar score at birth. But again, why stop there? With digital video and facial recognition technology, why not search for in utero pathology on ultrasound? The Shiny Happy Hair Scale applied prenatally.

OK, so now I'm being facetious. This silly post is actually grounded in a serious point: At what point does an attempt at early disease recognition, particularly as it pertains to mental disorders, become impossible to validate? Without gold standard diagnostic technology we become increasingly reliant on external interpretation of subjective internal phenomena without any way of verifying these observations with the subjects themselves.

It's tough enough knowing what Max wants; I'm not even going to guess about that kid on the ultrasound.
Posted by ClinkShrink on Sunday, August 20, 2006

I'm trying for natural curl today which means air drying, and it's taking forever....put me down as veering towards the Cat.

I believe you have overlooked the issue of co-morbidity. I believe I have the temperment of the 1st, but resemble the 3rd.

Not a good hair day but my mood is fine...how do we explain that one?
Foofoo: maybe some gel would help?

Gel would help, but then he'd have to check his head into baggage at the airport.

After an exhaustive archival search of the American Journal of Psychiatry, I found exactly 202 hits on the keyword: hair. As expected, there were plenty of references to secondary development, distribution, color, style, and loss as correlates of psychopathology. You undoubtedly expected Trichotillomania, but there were also several references to trichbezoars and Rapunzel Syndrome (pardon me, I had to cough up something); a truly inordinate number of correlations between hysteria, “sexual hair,” and women (all dated in the 1920’s); a single article referring to acanthosis nigricans and Bipolar Disorder ; and a single article entitled, Constitutional Factors in Homosexuality (1924), correlates to – you guessed it – hair. But I am sorry to say that, at least in this renowned & respected journal, not a single correlation of hair to mood. You and SHP may be pioneers.

I did that too, Dinah, and I also veered the same direction. You'd think in a desert at 90+ degrees it'd dry faster, but NO!

Did you realize Shiny Happy Hair Scale makes it sound like you named a new scalp condition or something after SHP?

Hee hee. Or, you've taken to weighing hair, would that fit in with that Rapunzel syndrome?

Yeah, pushing the puns too far. But I'm having a bad hair day, MEOW!

Hey! Hey, what about us bald guys?

My goodness. I have left my mark on the world of psychiatry. I can die happy.

Course, with what seems like some of my hair falling out, and stuff (could that be bipolar related? rhetorical since you can't answer questions like that about me), I may be in the same, or similar, boat.

NeoNurseChic said...
This comment has been removed by the author.
August 21, 2006

There was the song by Timbuk 3, Hairstyles and Attitudes [lyrics], so this seems to be a reasonable connection.