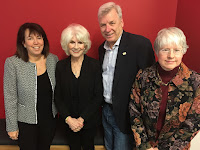 The third time scheduled was a charm and we had a wonderful time going in to Washington to be on Diane Rehm's talk show.  Okay, so the car wouldn't start at first, and I missed a turn, but we got there without event.  The show included our friend, Pete Earley, and two people who had experienced involuntary psychiatric hospitalizations, Lily and Jaime -- they both did a great job of talking about their experiences.  Pete, the author of Crazy: A Father's Search Through America's Mental Health Madness and more recently co-author of the novel Treason,  added a lot of life to the issue by talking about how hard it was to get his son care during a psychotic state years ago.  The nice thing: Pete's son is doing great, as are the two women who called in.

If you'd like to listen, the link is here:

And Pete Earley wrote more about the show, including some of the Facebook Q&A after, on his blog.
As far as the photo goes, we took a vote and Diane Rehm definitely looks the best.  What a great host and what a privilege to be on this marvelous radio show before she retires.
Posted by Dinah on Wednesday, November 30, 2016

With all due respect, many of those "psychotic episodes" described are from technology that is being misused, sometimes deliberately, to harm people, for fun and profit. When someone is being evaluated for psychosis, Law Enforcement should probably be contacted to determine who benefits from the patient/potential victim's devaluation caused by being labelled a "mental patient", to determine if deliberate crime is taking place. Misusing the mental health system, as a means for "Murder for Hire" is real, and was poorly recognized.

Magnetism could be denied, because our bodies are not known to have sensors on them, but we just accept it as truth. There are other things most people do not understand, but that does not make the victim of misused technology, mentally ill, though they may need help accepting how things are and how to complain to Law Enforcement.

With the great expansion of personal communication devices, criminal networks are much better positioned to "mess with people's minds", which was done with greater frequency, than now, because I have been working with Law Enforcement to pursue charges against people that are willing to harm others, for fun and profit. That population, because they hide behind the anonymity of the Internet, is significantly larger than previously believed, so change may be slower than we would like.

I heard your interview(s) on The Diane Rehm Show and I just have to tell you that it was fabulous. You both managed to work with Mr. Earley and Diane (who is phenomenal) to discuss or at least touch on all the key issues regarding not only involuntary commitment, but also other key issues involving psychiatric care in America—(I am a bit of a public health policy nerd—gotta have hobbies). I knew the history of civil rights of patients that was addressed in the Carter administration and then completely defunded in the Reagan administration (which coincides with the birth of the euphemism of “homelessness” which served to eschew the reasons for most “homelessness”. Reagan and his trickle down propaganda the trifecta of severe mentally illness, substance abusing and domestic violence)
However, I was stunned by the statistic that by demographic extrapolation, we have lost 95% of our in-patient beds for patients. We have this problem where I practice in the wealthiest county in Washington State. Our county is the home of the Gates Foundation and if there was any research out there that showed there was a chance at a permanent cure for schizophrenia, Gates who be all over it so he could go down in history as having funded it’s cure. I really liked the way callers’ discussing their wildly varying degrees of quality of care and trauma as patients who had experienced involuntary psych stays were listened to and drawn out sensitively and respectfully. Also that you got in there the lack of access to out-patient psychiatric care and that it is going to get worse due, I have read, to the demographics of retirement patterns of psychiatrists.
Okay, so this is just a ShrinkRap fawning fan blog post—but really Diane and Annette, isn’t it nice when you work in this profession to be told you’re awesome once in awhile without having to think about WHY I am praising you?
Congratulations!!!

Thanks for your kind comments. Dinah and I had fun doing the show.