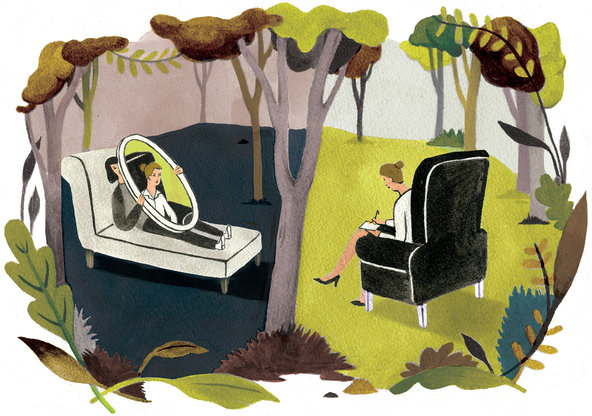 Good morning.  I'm sending you to look at two articles today, both by or about people who have been on our blog before.

Over in the New York Times, Robin Weiss has a fabulous article about her work with a patient who wanted to know details of her personal life, "The 'rules' of psychotherapy."  Dr. Weiss talks about how revealing such information goes against the 'rules' of psychotherapy, and she discusses reasons why she decided that in this case, it made sense to break the rules.  She writes:


As therapy continued with her, I heard how flat and tinny I sounded whenever I attempted to analyze what was going on between us. When I lapsed into too clinical a mode, our connection would wobble, and her alienation became palpable.

In contrast, as I began, in the face of her challenges, to let down my guard, our alliance grew stronger, and she became open to treatment. We would laugh together about her bringing me just the right greeting card or a flower from her garden — exhibiting her need to challenge “the rules” and exposing my need to interpret her actions. These interactions helped develop her capacity to observe herself in action, as she courted me in her Sherpa style.

I may have been a slow student, but eventually I understood: I was the one who had to change. From then on, when she saw that look in my eyes, I said yes, I did have a migraine. We followed episodes of the TV show “ER” together, and I told her where I was going when I left for vacation.

I like the flexibility this articles conveys.  All patients aren't alike, they (and their psyches) don't all follow, or even know, the rules. It's good to question things when the treatment doesn't seem to be working.

And in the New Yorker, Jeff Swanson, a medical sociologist at Duke, is interviewed for an article by Maria Konnikova for "Is there a link between mental health and Gun Violence?"  Dr. Swanson has a wonderful idea: instead of preventing people from owning guns because they have a psychiatric diagnosis, we should prevent people from owning guns because they are violent.  Konnikova writes:

In all of his work, Swanson has found one recurring factor: past violence remains the single biggest predictor of future violence. “Any history of violent behavior is a much stronger predictor of future violence than mental-health diagnosis,” he told me. If Swanson had his way, gun prohibitions wouldn’t be based on mental health, but on records of violent behavior—not just felonies, but also including minor disputes. “There are lots of people out there carrying guns around who have high levels of trait anger—the type who smash and break things,” he said. “I believe they shouldn’t have guns. That’s what’s behind the idea of restricting firearms with people with misdemeanor violent-crime convictions or temporary domestic-violence restraining orders, or even multiple D.U.I.s.”

I read the article by Robin Weiss -- and appreciated it very much. I have revealed some choice personal bits of info about myself to folks over the years and have seldom regretted it. It has to be about the pt, not about me. Some people want to know nothing about the therapist and some want some basis for connection. It is also different if a pt is meds only vs therapy. The relationship is not always the same and therefore we have to be flexible about what works for the relationship.

Thanks for posting this.

This article highlights the damage done to psychiatry in general, but especially psychotherapy, by the unfortunate association with psychoanalytic theory. There's even yet another embarrassing couch cartoon. At least there is a disclaimer telling us that the details of the case were changed, which is more than I can say for articles by Dr. Friedman in the same publication.

I like this post a lot. I tried to make (what I think was) a similar point in a post on my blog entitled, "Psychotherapy As A Game of Discovery." Sometimes negotiating the rules is the important part of psychotherapy.

(If this post is too self-serving, I'm sorry. I just get excited about this topic.)

Non-disclosure is more a guideline than a "rule." Competent psychodynamic therapists assess what and how much to disclose on a case by case basis. Rather than debunking analytic methods in general, Weiss shows that Freudian (ego psychology) interpretation is not always the best approach. This hasn't been news since object relations theory was developed by psychoanalysts Melanie Klein, DW Winnicott and others over 70 years ago.

The actual practice of psychoanalysis and psychodynamic therapy is a good deal more nuanced than detractors imagine. Difficult patients often highlight our neglect of existing analytic theory that anticipates the problem. The article is a good illustration of a healing relationship, an important part — but only a part — of dynamic work.

The article on violence and mental illness again highlights how the term "mental illness" obscures more than it clarifies. After all, nicotine addiction is in the DSM. If we limit relevant "mental illnesses" to those associated with violence, we just made the association tautological (circular). It makes much more sense to predict future violence based on past violence. However, restricting gun ownership on this basis overlooks confounding factors. E.g., people in violent settings are the very ones most apt to seek the protection a firearm provides. As an extreme example, consider police officers. I wonder how many "minor disputes" a typical officer has in an average work week? (Not blaming the cops, just saying that context matters.)

My shrink tells me where she is going on vacation and it's actually one of the things I most love about her.

I think when the psychiatrist or therapist shares some information about themselves it can be helpful. I've seen different mental health professionals over the years, and the blank slate thing doesn't work for me. I met a psychiatrist once who had no facial expressions. I kept thinking "flat affect," "poor eye contact," etc and wondered what her diagnosis was. It was like talking to a tree stump. I spent the entire time trying to see if I could get her to have a single facial expression, and it was a waste of time. I never went back.

Then, I had the opposite extreme where a male psychiatrist told me waaaaay too much about himself. I know his kids' names, I know about his life growing up, I know some things about his love life, etc. He talked too much in general. He constantly quoted books and movies, and it had a show off quality to it. That psychiatrist needed some serious therapy, himself.

The therapist and psychiatrist who have been helpful to me have disclosed minimal personal information about themselves in an appropriate manner. It shows they're human. I need them to show they are human.