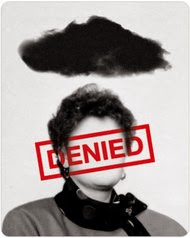 In Today's New York Times, Andrew Solomon, author of The Noonday Demon and Far From the Tree, has an opinion piece on "Shameful Profiling of the Mentally Ill."  It's on a topic that ClinkShrink has been very interested in: the disturbing issues that arise when the immigration department  ("ICE") decides the fate of psychiatric patients.

I'll leave you to read Mr. Solomon's article about tourists who were not allowed to enter the United States because they had been hospitalized for depression in Canada.  One woman was simply traveling through the US to get to her cruise ship, stringed lights in hand to make her cabin festive.

Stigmatizing the condition is bad; stigmatizing the treatment is even worse. People who have received help are much more likely to be in control of their demons than those who have not. Yet this incident will serve only to warn people against seeking treatment for mental illness. If we scare others off therapy lest it later be held against them, we are encouraging denial, medical noncompliance and subterfuge, thereby building not a healthier society but a sicker one.


Well put.  And have I mentioned that I loved Far From the Tree?  It's a wonderful look at issues of identity in those who are  different, but more than that, Solomon exposes the complexity of calling these conditions "disorders" requiring treatment, versus viewing them as a natural part of human diversity to be accepted rather than fixed.  The topics addressed include mental health disorders, but it's so much broader as he looks at topics including deafness, dwarfism, musical genius, autism, schizophrenia, transgender children, and children conceived in rape, to name just a few.  Ten years of writing, three hundred interviews, and well worth the read.
Posted by Dinah on Sunday, December 08, 2013

Maybe you all should read this post from PsychCentral;

In it was this: "However, for a determination of denial to be made — or to suggest the person withdraw their admission application — means that the border agent has to look at the police record and make a judgment call about the person’s health or mental health. Do border agents receive any specialized training to make this call? No, admitted the official. “That’s for the panel physician to decide.” Meanwhile, the person is turned away at the border."

I hope you all will read it. I really think after the increase in shootings these past 3 plus years, society has dug in to discriminate and demean, if not flagrantly ostracize mental illness.

And, wow, is it snowing outside my house right now!!!

I heard about this, and I've wondered if I will ever be prevented from visiting another country as a tourist because I have a history of hospitalization many moons ago. That would suck. Sigh. Something else to worry about.

Or, if I do travel outside of the U.S. does this mean I should fear packing my medication with me lest they read the bottle and recognize that I'm on an antipsychotic (never mind that I've worked full time for years and committed no crimes). Ugh.

P-K: I don't think there are issues with any other countries (disclaimer 1: That'd you'd want to go to, disclaimer 2: I could be wrong). I believe the issue is whether they'd let you back into the USA. And if you're a citizen, I think they probably have to let you back in.

Coming back to the US from Canada, I was once asked by an immigration officer if I was a psychiatrist. I'd say it was kind of random, but there were thousands of psychiatrists in Toronto for a convention. I said I was and asked why? He replied, "You're more organized than most of them; they have papers spilling out everywhere."

They did allow me to reenter the country.

Well, hopefully other countries don't take our lead and start doing the same thing. As much as I have blabbed on this website I probably have a file a mile thick by now. Ugh.