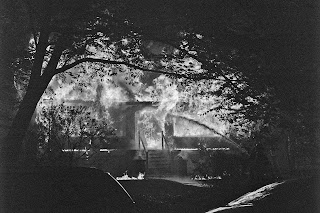 It hasn't been the easiest of summers for me.  As I've mentioned before, my brother died unexpectedly. And then last week, a neighbor's house burned down in the most dramatic of ways.  Watch those candles, folks.  Who would think that a citronella candle outside could burn down an entire house in minutes?  The people all got out, and the firefighters were spectacular.  But it's all a reminder of how fragile life is, and how it takes but a moment for one's whole world to change.  I go through life feeling very blessed, and losing my brother put a kink in that whole concept.

Last month, in the middle of a sleepless night, I had a temper tantrum and said something I would not normally say on Facebook.  Then, I shut down my account.  I've been asked why I did that, and even to me, it doesn't really make sense.  I was momentarily annoyed and it wasn't well thought out.

The truth is, I'm addicted to e-mail, and I was addicted to Facebook.  I'd checked it and then I'd check it again.  I like being connected with people, I like being in the know, I like looking at pictures of everyone's kids, and I like getting news from my favorite media sources and from news reporters I follow.  Since Facebook, I'm much aware of  current events.

Suddenly, I was Facebook-free.  Cold turkey, I surrendered.  I figured I would re-open the account at some point, and I'm sure I will, someday.  But what I discovered when I shut down the account was that life got different, in a better way.  I hadn't realized it, but every time one of my kids said something funny, or I went somewhere interesting, or something extraordinary happened or caught my attention, I was posting a status update, a link, a photo.  I was living my life for Facebook.  Now I can be in the moment without having to get the perfect picture, without wondering if I should post that quote or not.   Events don't have to be chronicled for others, they can be experienced for their own merit.  I'm not constantly assessing what picture to take and then to post.  Maybe it's because it's August and life always slows down in August, but I've felt my tension level drop and I think it's the relief of one less thing to attend to.

So there things I miss.  I miss hearing how my sister-in-law is doing several times a day (we now resort to email), I miss knowing what's going on in the world (sort of, a little) and my account is linked to the Shrink Rap Facebook page, so I can't update that with relevant links.  Roy can still access it, but somehow it's always been my job.  I'm still tweeting; for some reason, that doesn't have the addiction issue, perhaps because I don't actually know any of my twitter followers.  I've always been a Facebook fan, and I've encouraged friends to join, but suddenly, I'm not such a fan.

---------
On another note, I wrote about addressing the concerns of the Anti-Psychiatry crew over on Clinical Psychiatry News.  Here's the link.

Supposedly happens in therapy too.

Getting pissed and knowing that you can pull the plug and cut contact due to the lack of seemingly full realness of experience in virtual/constructed environments.

Not to tie this to "antipsychiatry activists," but folks are increasingly getting into legal trouble or people diagnosed being monitored for forced outpatient care for what they put on facebook. I don't know what you wrote and I feel compassion in the face of your difficult summer. But because you are a white physician, what you say may get to be interpreted as a temper tantrum, but if others say something similar, it may be considered symptomatic/relapse/danger.

I like "Rage quit."
I think this was "Pain quit." I expressed annoyance at my relatives who didn't come to the memorial service. I don't think I can get in legal trouble or that this could be used to commit me, even if I was a purple plumber.

So I just looked on FB for Dinah Miller and there are too many of them to count, but none are OUR Dinah. Sigh. My one rule for posting on the internet: anything you post you should not be shocked to find on the front page of the New York Times, or to have quoted to you in court. It is too easy to be affected by momentary passion, and that can prove to be embarrassing at the least. There are some well-known SR commenters who know this too well.

I love reading SR, and love especially many of the comments. Dinah has created a wonderful environment here in which we can explore many facets of this profession and hear from a wide variety of readers. This has been a hard time for Dinah, as she has expressed. Dinah, we are all for you!

We are raising a generation of deluded narcissists

Using a new study that showed this generation of college students to be exceptionally narcissistic as a platform, Fox News’ resident psychiatrist pointed his finger social media and reality TV.

On Facebook, young people can fool themselves into thinking they have hundreds or thousands of “friends.” They can delete unflattering comments. They can block anyone who disagrees with them or pokes holes in their inflated self-esteem. They can choose to show the world only flattering, sexy or funny photographs of themselves (dozens of albums full, by the way), “speak” in pithy short posts and publicly connect to movie stars and professional athletes and musicians they “like.”

Using Twitter, young people can pretend they are worth “following,” as though they have real-life fans, when all that is really happening is the mutual fanning of false love and false fame. …

On MTV and other networks, young people can see lives just like theirs portrayed on reality TV shows fueled by such incredible self-involvement and self-love that any of the “real-life” characters should really be in psychotherapy to have any chance at anything like a normal life.

These are the psychological drugs of the 21st Century and they are getting our sons and daughters very sick, indeed.

He’s so right; Facebook users really do only show the sexy photos of themselves.

I completely understand! Instead of summer, it's been the last two weeks for me. A close cousin was murdered two weeks ago and on the day of his funeral and burial, a friend of mine died unexpectedly. Talk about overwhelming! Everyone needs a break, including you. Enjoy your time off of Facebook and take as much time away as you need.

I will probably send you guys an email asking Clink some questions regarding the murder (nothing specific about this case, just general questions) because it is pretty much guaranteed that the guy is going to have a psych eval and it will play a big part in the trial. Hopefully, she can turn it into a blog post and educate us all.

My one rule for posting on the internet: anything you post you should not be shocked to find on the front page of the New York Times, or to have quoted to you in court.

That includes e-mail too. Don't write anything you couldn't live with if seeing it on the front pages.

The recent revelations about the NSA come as no surprise to some of us. I stopped trying to keep secrets on the net 20 years ago, when I had some very interesting security clearances.

Anything you want secret never goes over the lines.

Not to keep on knocking on Hopkins psychiatry and their alumni/professors, but I take nothing Ablow says with seriousness.

Does he have any photos of himself online that aren't well picked or curated? Does he ever appear on tv without makeup/wardrobe help? Does he not say/write provocative/offensive things as a means to get attention and money and disregard deflate self-esteem of folks who disagree? Is he not one of the most strong public supporters one of the biggest "TV narcissists," Glenn Beck? Did he not put conditions on a potential run for Senate, that he would only do so if he had no primary challenger, presumably to keep the race from exposing his faults and from looking bad?

As for the pointing the finger on social media/facebook, I wonder if he or other people keep pictures they don't like of themselves in their "analog" photo albums, or keep a lot of books/letters from people or about topics that they disagree with. This is not a social media only issue, and not uncommon.

So over TV mental health professionals, particularly hypocrites like Ablow.

Thank you, Jesse.
I agree that Facebook (for those of us who actively post) has a narcissistic quality. There are people who want to live a very under-the-radar life, the attention the better, and many of them don't use Facebook. And there are some people who've been quiet and shy, and Online forums have allowed them to interact, express their opinions, and promote themselves in a way they don't do in real life. And then, there are those of us who just make a lot of noise and it's one more place to spout off. The problem with the term "narcissistic" is that it's a pejorative term. I might prefer "out-going" if you don't mind.

The LESS attention, the better... is what I meant to say

I am on Facebook but don't post anything about myself, not even a picture. I do have "friends" and mostly use FB to see what is up....was on it rarely until a coworker was diagnosed with a serious illness and now it is one way to keep in touch and show support ......not the only way, but one way! I can isolate myself easily, and in person I can be too intense....so far, careful comments or just likes on FB seem to work. Do what works for you, Dinah.

for some it is definitely sick

depends how you use it

if you're to the point where your posting on fb that your at the airport, or about to go out for dinner, or about to ……, then you have a real problem

and with your analog photo album, someone has to be in your physical space to be exposed to your photos-- with fb, someone is your fb friend (once again, aglow is correct-- how many of these fb friends are truly friends????) they are greeted by all your photos unless they go through the tedious task of customizing who sees what

if you are really into fb, then you should really consider seeking out Dinah for more than just her blog (she'll likely start with therapy, but who knows, maybe meds will help too!)

Nice timing of your article.

Keith Ablow wrote about Facebook today at the Foxnews.com site.

Not sure if your thread takes links, but here it is:

Read and absorb as able.

Sorry for your loss and difficult summer.

I am so sorry for your loss. Big hugs. I hope the fond memories will soon ease your pain.