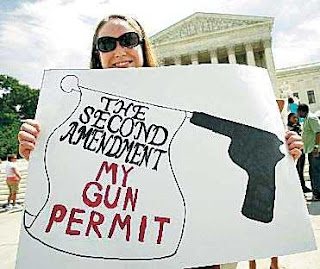 Legislation is being proposed  in Maryland --- and I assume in other states as well --  that would require patients who have have had psychiatric hospitalizations to get a psychiatrist to certify that they are safe to own a gun if they want to apply for a gun permit.

Psychiatrists don't certify that people are safe to own guns.

That's it. End of sentence.  The states legislators may have decided that this is part of our training or our job description or that this should be our role.  Can you imagine anyone in any career ever authorizing that anyone is safe to own a gun?  Sign your name to that with the implied promise  that any person won't get too angry, won't get too depressed, won't feel too threatened, won't use the weapon appropriately (for example, to shoot an intruder) but when less force might have sufficed.  Can you even begin to imagine the liability issues?  Or worse, the guilt when the patient certified as "safe to own a gun" then harms himself or someone else?  Psychiatrists diagnose and treat mental illness.  They don't certify that people are safe to own guns.

This would seem to sign of the mentality that grips our society: it's ALWAYS someone else's fault. Blame the misuse of a gun on a doctor. Blame the misuse of a car on the manufacturer. Blame the mishandling of a hot cup of coffee one producer.....and the list goes on and on and on. In our society we have lost the ability to take responsibility for our actions. No child left behind? I hate to say this: but in the world not everyone is a winner and some children should be left behind. We need to start teaching that their our consequences to our actions, and not a t-shirt for everyone at the end of the race. Just my opinion.

Great. I am glad that you do not want to speak to whether or not I should own a gun. It is likely that you are thinking not so much of the millions who would own the gun and not use it in a way that might come to haunt you, but rather of the one who might. And, of course, you cannot predict and are right in pointing this out. I will respect you more when you realize (as a "profession") that you also cannot really determine that a person is such a danger to self that restraints and hold are warranted. You do not worry about that. Only one person can get hurt and said person has no political power.Best stick to those with mommy issues and leave the real work to people who have a clue. OH Mommy, you were 1,1147 , why'd ya have ta die and leave me all alone?

This type of law is retroactively punishing me because I "got help" for my problems. I reiterate that psychiatrists and therapists will lose a lot of patients over these laws, especially in rural areas where virtually everyone owns a .22 rifle. Decisions like these should be made by courts.

This is not a new idea. I wrote about an article in the psychology literature back in 2009: http://behavenet.com/opinion/psychological-testing-and-firearm-permits

This is just another example of stupid legislation conscripting physicians without their consent. Treating physicians should never make such determinations, and forensic psychiatrists should avoid them and perhaps pay a greater share of malpractice premiums so the clinicians don't have to support their work.

Another approach might be for all of us to refuse to treat any patient thought to be at risk, unless or until society indemnifies us.

Start by demanding that the lawsuit against Homes' psychiatrist Lynn Fenton, MD be thrown out immediately.

Yes, Catlover. It might not be so bad if MD psychs lost pts. Non MDs do not have to report. I do not think, well actually I know, that MDs do nt make better therapists. See a shrink if you need meds that family doc cannot prescribe. Otherwise, they have zero credibility and zero desire to provide real care. Let them die a natural and peaceful death.Same as all others who outlive a purpose.

Hey, this committee of the Maryland chapter of the APA that ClinkShrink spoke of should be able to fix this problem rather quickly, as past comments at another post seem to allude.

No, in reality it won't, and the only way to end stupid laws are to not cooperate with them, as civil disobedience still has its place in society.

But, another reason why it is time for people to ask themselves why they vote for incumbents. Absolute power corrupts absolutely, Maryland politicians, state and federal levels, show this to such horrendous degrees of late!

While I agree with Dinah on much of this, psychiatrists do indeed make this type of determination: consider the screening that is done when one enters the military. The question is not whether one is safe to own a gun or use it properly, but whether one has a mental illness that would keep a person out of the army. Once in, the army has doctors who can act quickly if a medical problem occurs.

When we certify that a person is a danger to himself or others, that certification requires the determination of immediate threat and allows a 72 hour observation. So if a psychiatrist were to say that a given person shows no sign of current mental illness, despite having been hospitalized at some point, for how long is that finding valid? Clearly anyone can have a recurrence of illness.

The entire premise of these laws is flawed. The presumption is that anyone can have a gun, so the laws put the burden on the state to find those who are at risk, with the result that the entrance bar is extremely low.

Right. We diagnose and treat mental illnesses. If someone is seen for an evaluation, say for the military, you can say they don't have a mental illness (and even there, that assumes the patient doesn't just lie to you about the presence or absence of symptoms). You are not asked to say whether they will obey orders, function well in the military, or to certify that they will not become ill in the future. Everyone knows that you can't make that prediction.

I would be happy to certify that my patients are safe to use guns for say a week or two at a time, but the certification here is not whether they have an illness, which we all know can change with regard to any illness, but the implication of the permit is that the patient will remain safe to have a gun unless another major event (felony charges or another involuntary psych hospitalization or another prolonged voluntary hospitalization, or being found NCR for a crime) should happen.

Okay.
Psychiatrist Don't Certify People to Use Guns and They Don't Predict the Future.

You think it's fine for a 3rd party such as a state legislature to decide that we do this? Were you trained for this? Will you feel comfortable assuring the government that your patients are safe with firearms? They also want to legislate that medical marijuana is to be used for a variety of psychiatric conditions (hb 302) and that podiatrists can do ankle surgery. I have no idea if podiatrists are trained to do ankle surgery.

Catlover is correct. Psychiatrists will lose a lot of patients if legislation like this passes. No patient should so willingly hand over their civil liberties to the government when they have done nothing wrong. Penalizing people who choose to get help. Unbelievable.

If legislation like this does passes, I hope patients won't tolerate it. I won't.

This reminds me of the former USSR. Guilty based on group membership.

I 'voluntarily" committed myself to a psychiatric hospital once, some years ago. I say "voluntarily" because I was given a choice: do it yourself or we will make you. This because i was undergoing some of the signs of depression, and reached out for help. I was not dangerous at that stage, either to myself or others, just down and depressed. Now you say a major event like "another involuntary psych hospitalization or another prolonged voluntary hospitalization" will be or should be enough to strip me of my rights? I truly regret asking for help, as I did not actually receive any, and now face the specter of stigmatization and
2nd class citizenship, should I become seriously depressed again.
I learned the lesson the hard way: do not, under any circumstances, ask for help. Do not talk with a mental health professional; that talk is far more dangerous to you than that gun is. At least with the gun, you still control your life, for better or worse; with so-called 'help" you no longer get to hold your head up as a citizen with equal rights - you are now dangerous, and need to continually prove yourself 'safe" to strangers. I would rather have that gun and not need it than to not have it and need it.

I will not be signing certificates saying attesting that I am certain anyone is safe with a gun.

Isn't the point of a gun to shoot things? How can we guarantee that anyone is safe with a gun?

But this is not violating the law, the law says you need this form as one part of an onerous process that includes releasing all your mental health records, and a psychiatrist's certificate saying you are safe with a gun, in order to get a permit after a hospitalization. The law does not say that ShrinkRapDinah must authorize such things.

No psychiatrist will do this. We aren't trained to assess safety with guns, and we don't predict that anyone won't become dangerous.

The silliness is that the legislators have done this, essentially creating a once-sick, no-gun-ever law.

What would make sense? A psychiatrist filling out a form stating whether a patient has a symptomatic mental illness now.

I'm calling on docs to say to legislators when they draft bills that require our authorization for things we won't authorize anyway, "We don't do this."
What if they legislate that psychiatrists need to walk tightropes or do do brain surgery?

I don't know if the legislators did this on purpose to keep guns permanently from anyone who has been hospitalized, or if they just don't know that psychiatrists won't take the risk or saying someone is safe to have a gun.

I'm glad you're out in front of the pack to say that psychiatrists shouldn't have to authorize people to walk tightropes. Keep up the good work.

Every time I try....well, it's not a pretty sight.

Well played. Sulking can be effective sometimes. Okay, I'll play: That is true, isn't it? Well, maybe that tells you something about you. But it's kinda late in the game for you to be someone else.