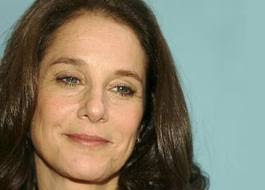 Debra Winger plays Frances, an actress who is having trouble remembering her lines. Oh, and Frances is the sister of a former patient. Patricia was Paul's patient 18 years ago---she spoke highly of Paul when she saw him when their mother was dying of breast cancer. But now sister Patricia is dying of breast cancer, and Frances is 2 years out from a divorce and her teenage daughter is not speaking to her. Again, a parallel to Paul's life.

Frances is an in-your-face kind of patient. She knows Paul has teenagers and quickly jumps to "you know what it's like." He is clearly uncomfortable, and she backs off, but then she asserts that Paul doesn't have a wedding ring on and he must be sleeping with a boppy 25-year-old. She makes a sideways reference to the idea that men his age may have trouble getting it up, and then wonders if her sister was a nicer patient. Hmmm.

Paul continues to be an in-your-face kind of therapist. He's always been quick to point out a patient's issues to them in a confrontational manner. I never like this, and this session/episode is no exception. And Frances comments on it--- her sister said he was supportive and easy to talk to. Funny but Paul is irritating her. Sunglasses on, and Frances asks if he always puts out flowers or if he was trying to impress her. Two people dealing with issues of aging, fading, and self-doubt.

The episode ends when Paul calls a friend to ask for a reference for a neurologist. As Frances is worried that she, like her mother and sister, might get breast cancer, Paul is worried that he may get Parkinson's Disease like his own father.
Posted by Dinah on Tuesday, October 26, 2010

Wish I could watch the series, but your sum-ups will have to do! It sounds like Paul's therapeutic style has changed since he treated the other sister; I wonder if Frances is going to resent that.

Meanwhile tomorrow I'm a gonna go tell my psychologist I think our therapeutic relationship is busted, and that he broke it. FUN fun. Not. My life should be an episode.

Sarebear: Paul has been too confrontational all along. It doesn't help that Frances is so intrusive. I think the main issue is that it all has to fit into a 25 minute episode which really fast-forwards the whole rapport option and puts on a time-pressure for making great interpretations that can happen more gently in real life.

Clink is rolling her eyes and saying "It's a TV show, Dinah" Yeah, yeah, yeah.

And Sarebear, Your life should be an episode.

What was your reaction to Paul's new therapist? I didn't think I liked her at first, but did by the end of the episode. She doesn't have Gina's warmth, but she seems to be quite perceptive and maybe a good match for Paul.

Shhhh, no plot spoilers---I'm doing this off TiVo and can only survive one episode/night. I'll get there.

Ahh, I see. Well, I don't think what I said spoiled anything, assuming you already knew that Gina was not in this series. I knew it before the first episode from seeing the advertisements, so I am hoping you did too. I didn't expect to like this new person, because Gina was my favorite person in the previous 2 seasons.

Ok, I had the most HILARIOUS moment ever at the end of therapy today; it just, er, blurted out of my mouth, and I don't normally wonder that stuff about my therapist, it was kind of a free association thing, so, um, we had just been talking about, uh, orgasms, and he gets up and flips through his appointment book and says, "I have 10 or 11", and I blurt out, astonished, "You have ten or 11 WHAT?"

He looks over at me and says, "Oh! I understand where'd you'd get that from . . . I was talking about Friday."

See, he's rather concerned about stuff going on with me and wants to see me a second time this week (the session was 99% NOT about sex) and I think he might be doing it as a freebie, since my church has been paying for one session a week, but he is, um, rather highly concerned about some stuff.

Anyway, I was laughing my head off at the end of therapy, kind of chagrined cause after I said it, I realized what it meant and I was like, um, I didn't mean to go there, but with what we'd just been talking about . . ." and he was like, "I understand." I told him 11, and we were done.

Spent most of the session trying to fix the therapeutic relationship, made some progress.

I just thought you guys would think that was funny. Perhaps a bit inappropriate, but I really didn't mean to go there, it came out of my mouth before I knew what it meant, you know? And then I was like, um, oops, what did I just say oh noes . . . . . but it WAS funny, heh.

It's funny. I hate it when my mouth gets ahead of my brain.

That's EXACTLY what happened, because I was half shocked, especially when I realized what I'd said implied, I DEFINITELY WAS NOT THINKING THAT ABOUT HIM roflmao. It just popped out, lol.

I mean it came RIGHT AFTER we'd been saying stuff, so when he walked over to his desk and talked appointments, I said it astonished/shocked and then I realized what I'd said and was dying inside but then we both knew I hadn't meant it, that it had come out without thinking, because of course I wouldn't EVER go over that boundary, and I know he wouldn't talk about his, um, sex life, lol.

So knowing that, it became funny. Maybe you had to be there, but I wonder what some of the funny therapy moments that Dinah and Co. can't mention are. This one is a bit embarrassing for me, but I thought the funny factor overrode that, heh.