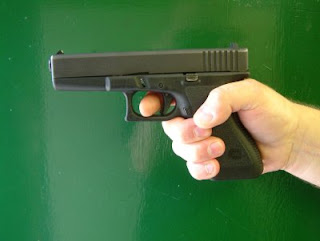 It appears that I'm destined to blog about this. Every time a shooting spree hits the news and several people get killed, I get a note from somewhere asking if I heard about the story and my thoughts about it.

I have to say up front that I'm reluctant to blog about spree killers. I didn't blog about Cho and the Virginia Tech shootings or about the Amish school shootings or about the shootings at the Omaha shopping mall. And now we have the shootings in Colorado. These high profile media blitzes just strike me as disrespectful and hurtful to the victims and the victims' loved ones. I don't want to be another mental health talking head discussing the pop psychology of criminals. It makes the criminal take on an almost fictional quality, like a character in a television series, and turns a real human being into nothing more than a profile:

"He was drunk, he was high, he was poor, he was desparate, he was abandoned by his wife or girlfriend, fired from his job, facing jail time, always a loser, always a loner, he was quiet or cantankerous or paranoid and litiginous. He listened to heavy metal, listened to rap music, wore dark clothes, wore a trench coat, never spoke, he said hi to the neighbors, seemed like a nice guy, never thought he would do something like this."

For me, these stories aren't theoretical. They are my patients. I've known more than one spree killer and several hostage-takers, and I can tell you that there is no single monolithic answer to the question of why someone pulls the trigger. For me the most concerning reason was reflected in the suicide note left by the Omaha shooter. It said: "I want to be famous." And now, thanks to the New York Times, he is.

This leads me to the final reason I don't want to blog about spree shooters. Because somewhere out there, right now, there is a sad, angry, desperate person who also wants to be famous. I want that person to know that he will not be, at least not here on Shrink Rap.

Posted by ClinkShrink on Sunday, December 16, 2007

I agree that the high profile media coverage certainly doesn't discourage spree killings. And really, how much do we need to know about the killers? Did the massive coverage of Cho really accomplish any purpose? I don't think so. I'm still curious about exactly what it is that's broken in these people that allows them to kill like that, but the media coverage hasn't shed any light on it at all.

Clink, good for you. Stick to your guns, so to speak.

And MWAK, I don't think there is an easy explanation, that's why the media goes whole hog on the gore...nobody has the guts to say we don't why. It's easier to look for something "broken", but I'd think it's like Humpty Dumpty (lots of parts broken)- all the king's horses couldn't put these people back together again.

You make an excellent point in that the media relies upon clinicians willing to go on record with pseudo-information and useless generalizations. It seems to me that Robert Hare has made the understanding of severe personality disorder like psychopathy graspable. Nevertheless, spree killing behaviour is grossly anomalous even among psychopathic peers. That being said, it seems even more outrageous, then, for the media to sensationalize extraordinary anomaly as measured against the population as a whole. Why do they kill? Who knows, and given that it can be neither be accurately predicted nor prevented, who cares?

MWAK: We only know something about the spree killers who survived, and that's not much.

Gerbil and FD: Thanks

Foo: Darn, I wish I could write like you. Yeah, what you said.

Unfortunately, its that same 'fame' that in turn causes difficulty for those really in need of the same help. The media (as always) portrays all mental health consumers as shady, dangerous individuals.

Further, in the wake of Virginia Tech, instead of using those events and lessons to improve communication and provide more comprehensive services within universities, it has instead added to the fear of liability in university administrators and university mental health providers.

I am reminded of Marshall Mcluhan www.marshallmcluhan.com
The medium is the message in this case as well.TV blows on the kindling fire yet does not have the ability to weigh or even dream cosequence.

That third paragraph was quite....'Everyman'. Evokative and thought-provoking.

Thanks for all you do.

Okay - I just grasped what it stirred up in my memory; bits of the poem, "Please Hear What I Am Not Saying."

My Own Woman said...

All for 15 minutes of fame, while the victims family mourn a lifetime.

Melanie: I agree, it's what colors the world for everyone who doesn't know the reality of psychiatric disorders and the people living with them.

Pkgonzo: I think it's worse than that. The media doesn't care about the consequences.

A: Thanks, I appreciate that the vote of support.

Woman: True, and the surviving shooters deal with the consequence forever after they sober up.

Dinah: Maybe one on people who refuse to own phones?

Roy, with all due respect, I feel you are missing the connection between the violence and the shooters being on antidepressants.

Before I go any further with my points, let me get some of the standard disclaimers out of the way.

1. I am not a scientologist
2. I am not implying that all people on psychotropic drugs are violent.

I am also not saying that with these incidents, that taking the drugs was the sole factor that made them do it. But in many of the cases, they had no history of previous violence. For example, Jeff Riorden, the former major league baseball player who was on 5 antidepressants, held up a place for $100 even though he was set for life financially.
He didn't fortunately kill anyone but that is a perfect example of the behavior I am talking about.

Dr. Jay Cohen, MD, who is definitely not anti-meds discusses how SSRIS can make people homicidal on his website:

A nurse who runs the Paxil Progress boards did a segment on Fox News on Sunday night about how Paxil made her son violent. Fortunately, no one was injured or killed and now that he is off the meds, that behavior has completely diminished. He is fine. She got no help whatsoever from her son's psychiatrist.

Anyway, I was initially reluctant to mention this topic due to it being so controversial. But I just feel this topic needs to be discussed.

I agree with what you said. My child was/is a student at Virginia Tech. The media coverage hurt as much as it helped. Many of those kids don't want to talk about that day at all. It's very hard for a young adult when the first thing they get asked about college is not "how do you like classes" or "what's your major" but rather "Were you there, were you injured, did you know anyone who died?"