It's Fun Until Someone Gets Hurt, Then It's Hilarious

This isn't a post about psychiatry. Pretend you don't know I'm a shrink. This is a post by an old person ranting, most specifically by the mother of teenagers, ranting.


It's Fun Until Someone Gets Hurt, Then It's Hilarious
I saw that on a T-shirt recently, and actually the T-shirt was being worn by someone my age, the father of two teenagers. It pictured a skier stick figure, upside down, and I cringed-- why is it fun to watch someone get hurt? Why would someone make a T-shirt advertising that, and why would another someone buy it and wear it in public? I don't get it.

I grew up in a world where it became very important to be sensitive to others, to be conscious of what one says in terms of race, religion, nationality, gender. Words are important and if you utter the wrong ones, even innocently, you can be minced. I grew up in the North, post-Civil Rights, and attended integrated public schools and gender-balanced institutions of higher learning. Obscenities were bleeped on TV and Clarence Thomas was on trial for sexual harassment. My world started in a sensitive place, it's grown even more so.

Suddenly, it feels like the pendulum has swung the other direction-- a complete reaction to interpersonal sensitivity. I've entered (somewhat involuntarily, but hey, I had them) the world of teenagers. Words that have always been so powerful and negative, well, suddenly they're terms of endearment. I borrowed an iPod the other day to jog with-- Golly Gee, Wally-- 1800 downloaded songs and they each consisted of the same three obscene words chanted over and over. All I can figure is this culture irreverence-- perhaps best personified by the ugly and inept words of Don Imus-- is a cultural backlash to a world where being politically correct has become so important, so hammered into us.

I read an article not long ago in the Baltimore Sun-- it was about an entrepreneurial young man whose Internet T-shirt business had taken off. What an industrious young man. I went to the website, curious. Here's one of the shirts he sells: 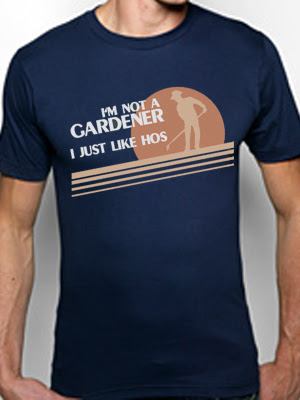 You get the idea.

Mostly, the teenage world seems to have some feel for when and where-- they utter the unthinkable words and phrases amongst themselves, they understand (or so I'm told) their own code-- they keep this world hidden, and well they should. I may be wrong, but the rules all seem fuzzy as to who can say what to whom, where and when. Probably, and I may just be old, Mr. Brady, it would be fine if T shirts didn't announce the insensitivity of the wearer.

The good news is that I found some Led Zeppelin tunes on the iPod. There's still hope.

Clarence Thomas' hearing... now there is something I haven't thought about in a long time.

I am similarly weirded out by all of the insensitive tee shirts, horrendous lyrics, and generally lack-of-consideration-for-others that somehow became part of pop culture. I hope it's not because I'm old. I've only been out of high school for 10 years.

I wonder where this whole "me first, you suck" business came from anyway. Was it the over-emphasis of self-esteem in the late 80s and early 90s (a campaign I mocked even as a child)? Is it the logical conclusion of capitalism? Is it politics? Or do people just suck?

I sometimes wonder if the reason I'm so depressed is that I feel so disconnected from all that other people seems to find entertaining or valuable in today's culture. I feel like an outsider in my own culture.

I was always so interested in alternative rock music, and then one day when I was 27 I went to a concert and I suddenly saw how disgustingly macho and misogynistic the lyrics and the bands activities were. It disgusted me and I haven't gone to a rock concert since.

I can't stand all the reality shows on t.v. due to the negative activities being played up and worshiped under the guise of entertainment. It disgusts me how they treat each other on some of those shows.

If this is modern culture...I want none of it.

OHhhhhh man; the Clarence Thomas thing . . . . there were SO many things on sexual harassment prevention, often with lawyers from the Legal Dept. of the health ins. company I worked at at the time . . . . and then, a couple months later, a semi-bachelorette party in the almost all-female Underwriting dept., complete with a cake with a kielbasa sticking upwards out of it, adorned with a pair of round frosting decorations nestled together beneath the upward andle of it.

Now, I was very naive; in some ways, I still am.

I didn't know what it was, or why they had a sausage coming out of the cake, let alone how it was artfully arranged upwards with a gentle curve and various unusual frosting decorations attached.

So, they thought it was funny to serve me up the piece with the frosting scrotum.

I may have been in my early to mid twenties, but I had never seen even a picture of a naked male.

So I merrily, but confusedly, go back to my desk, and start eating the cake. Halfway through the cake, with one testy section of cake down, one to go . . . . I slowly stop eating and it dawns on me. A creeping, horrifically foolish and deeply, terribly and painfully embarrassed feeling comes over me, building to a crashing wave of, "I've been had, in a nasty way, not in a, we're ribbing a fellow co-worker in a, we're all in it together kind of way . . . ."

I threw it out, and just felt a horrible, engulfing, isolating tingling all over for the longest time . . . .

go to the site Threadless; many inappropriate tees, many hilarious ones (like a hostess chocolate cupcake with the white squiggle on top, jump roping whilst a different veggie on each end works their end of the jump rope - lemme know when you "get" it, hee hee!)

OH! I once saw a t-shirt, that had a rainbow (I think) and two unicorns, that, at first glance, looked to be playing/frolicking.

After that first glance, though, you could see that they were obviously humping.

Afternoon Delight, indeed (I think that's what that shirt is called . . . . ). I was horrified, and it's even worse if kids saw it.

Then there's Happy Bunny (or I forget what it's called) . . . . this bunny is emblazoned on pajamas, shirts, backpacks, about anything you can think of, with very rude, BEYOND rude if you were raised with any manners at all, sayings. Mean-spirited, and even cruel, at times.

So. There you go.

aek all over said...

You don't have to look far to find it - there are many medbloggers who are eating a nurse alive on more than one blog and are leading me to distrust the words of anyone in the medical profession. No one has ever tried to stop that - or even to help the person who is being attacked. I wonder why?

Is it OK to ignore it? Or is it more acceptance of what is being done?

OMG! I am 38 and find these shirts hilarious. I wouldn't wear them or buy them for another person.

I laugh at my monthly teeshirthell.com e-mail.

The shirts I will admit to buying are only worn at home and include the following;

1) "Support the fine arts, shoot a rapper" over the requisite gatt picture.

2) "Asthma is sexy" over a sillhouette of an inhaler. I have asthma.

Another one I have that I bought somewhere else but will not wear out because this is Texas is my "Somewhere in Texas a village is missing it's idiot." I wore it once when me and the ex went to a home and garden store. Someone asked what it meant and I thought that either a) they had intellectual issues, or 2) they were about to kick my a**.

There is a bad shirt I won't admit to owning that was a gift, and some wrapping paper that looks like wadded up brown paper and says; "This present is the bomb" in cutout letters.

I am a horrible evil person. But you already knew that.

PS Repressed over disciplined Lily also LOVES gangsta rock on the headphones, of course. The dirtier, the better. I also have 2 tattoos.

My parents were abusive, and overly strict. So was the Catholic school.

I am also quite sensitive....

1) I do not like violent movies, especially rape scenes or gory scenes.

2)I do not watch any reality show that mocks the contestants.

I guess I'm always overly disturbed or embarrassed by things like that. Although, I do like Happy Bunny, which Sara references above, and I even sent Clink a link to Happy Bunny stuff once before! I have a Happy Bunny book in my nightstand drawer that I take out when I need a good laugh - and some of the things in it aren't very nice! But yet - it makes me smile...

I'm not one for crude things, however. I find it very distasteful. Once, I really liked this song (not going to get into what song it is or who the group is), and when I really listened to the words, it was VERY negative towards women, and I had actually bought the cd before I really realized that several of the songs on there seemed to promote beating up women. It upset me that I had really liked the song in the first place - sometimes I think just upbeat, catchy songs take hold, and people don't even care what the real message of the song is! Not everyone - but sometimes...

So much of our culture today still promotes women as sex objects, and we just go right along with it. I've laughed at stuff that I really shouldn't laugh at just as the next person has. And then I realize what it is I'm laughing at. And I'm not really a raging feminist or anything like that (although I did take a women's lit class where we discussed what's song wrong with being called a 'feminist' anyway?), but sometimes I am saddened by how women are still portrayed in society.

And then I think gerbil says it well above about the "me first, you suck" thing. Didn't some philanthropist call this "GenME" - Generation Me? Meaning for heaven's sake, don't tell your kids they aren't good at something - do NOT ever risk destroying their self esteem... It's all about how they feel about themselves... Heaven forbid we all take a little responsibility for both our good qualities and our shortcomings! I guess, having been born in 1980, I'm technically a part of that generation, but I don't feel like I fit there really!