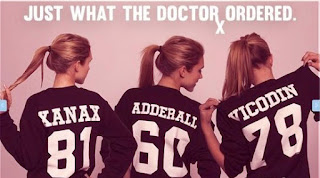 Today's post is over on Clinical Psychiatry News, "Should SSRI's be Sold Over-the-Counter?"
It's a question I'm asking just so people will flip the idea around in their heads a bit; it's not one I'm trying to sell.

Please check it out Here, and do let me know your thoughts.
Posted by Dinah on Thursday, December 10, 2015

IMO all drugs except antibiotics should be OTC to adults more or less like alcohol and nicotine.

It's a good thought experiment, as it raises bigger issues. In general, OTC meds are supposed to be safer than prescription meds. But aspirin risks stomach bleeding, acetaminophen (Tylenol) liver failure, and diphenhydramine (Benadryl) delirium in the elderly. Are SSRIs more dangerous on a dose-by-dose basis? Hard to say. Potentiation of mania would be a concern though.

Another argument for restricting access to some meds is their addiction or abuse potential. This doesn't apply to SSRIs unless you count discontinuation syndromes.

Yet another argument is public health. Open access to antibiotics would promote resistant bacteria, rendering these lifesaving drugs useless for everyone. Again, this doesn't apply to SSRIs.

And the last reason is complexity, the idea that untrained persons could not reasonably know when to use a particular med. As you wrote in your CPN piece, this is certainly a factor with antidepressants, where the public (and regrettably, even a few docs) fail to differentiate transient low moods from clinical depression. Dosage adjustment, duration of treatment, alternatives like psychotherapy, and other clinical decisions separate antidepressants from single-use OTC drugs like aspirin and Tylenol.

So given our current guidelines, SSRIs should stay prescription-only. But moviedoc's wider point is also good to ponder. I was at a talk recently on the failed war on drugs. The speaker argued that legalizing and regulating all recreational drugs (as we did with alcohol, following the failure of Prohibition) would reduce crime, ease addicts into treatment, and NOT lead to an increase in casual use. Whatever the merits of these arguments, they apply as well to prescription drugs generally. Our current system inflates the cost of drugs, turns doctors from consultants to gatekeepers, and forces some of the public into being patients when they'd prefer not to be. Maybe the default ought to be open sale of all drugs, with limited restrictions for good cause. I'm not ready to advocate for this, but it's worth thinking about.