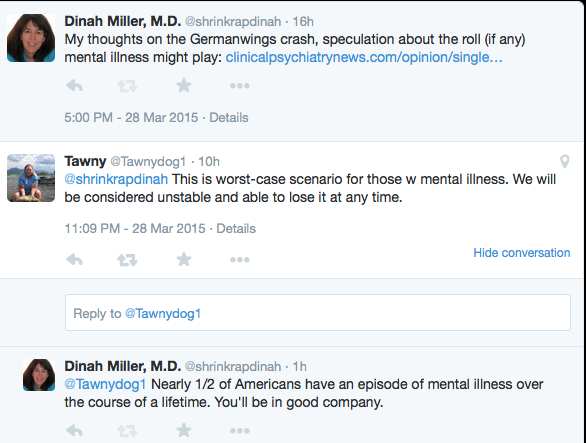 Over on Clinical Psychiatry News, I wrote a an article about still-unfolding story of the Germanwings co-pilot who deliberately crashed a plane into the French Alps, killing 150 people.  Please surf over to read Was Mental Illness a Factor is the Germanwings Crash.   I'll warn you that the facts aren't all in yet, so the article is purely speculative, and it's possible we will never know why this co-pilot decided to crash this plane into a mountain.  I also tell you that as a psychiatrist, I don't know why someone commits mass murder; I've had no experience with patients who kill, much less kill 149 other people, nor have any of my colleagues or mentors.

Tawnydog1 may be right in her tweet above, the New York Times already has a front page article calling for  screening for pilot mental health issues.   Since the event of pilots crashing their planes into mountains is extremely rare (1 in many millions) and the pilot was said to have had an eye problem, I'm wondering why they aren't calling for better screening for eye problems?  Really, we don't know anything yet: we've heard nothing about the stresses in this man's life, whether he was telling friends and family that he was having delusions, why he took time off from training, what his illnesses were, and how he dealt with anger.

I'm going to go out on a limb here: people commit suicide for a number of reasons, one of them being a way to escape the unbearable pain of depression.  People kill for a number of reasons, one of them being because they are angry.  There are many mentally ill people in the world and there are many angry people in the world.  There are very few mass murderers.  We need to stop using "mental illness" as the endpoint to answer the question "Why?" when a mass murder happens.  Mental illness is not an explanation, and this may be a problem that is so rare that there will never be a reasonable response to this event other than to say that for any number of reasons, pilots should not be alone in the cockpit of a commercial passenger plane.
Posted by Dinah on Sunday, March 29, 2015

The final arbiter of any extreme behavior or thought is the conscious state of the individual. Apparent personality and decision-making are often the most visible aspects of that process. In this post I tried to illustrate how these transitions can occur totally independent of diagnosis.

I think the problem comes down to psychiatrists being too focused on the diagnoses of disorders and not the conscious state of the individual. Mental disorders are certainly potent transformers of conscious states, but they don't predict the specifics of the event for an individual or who is likely to be affected.

I rarely see notes anymore that contain a formulation that is more than a list of diagnoses. Formulations containing descriptions of transformative events, psychological trauma, adaptation to stress, resilience in the face of adversity, etc would go a long way toward getting at unique conscious states, but we need a more specific clinical method to get there.

Amazing post, amazing way to put it. Really, seriously, I thank you so much for this post. In addition, I completely agree with Dr. Dawson, the above commenter. Both posts should be run publicly on newspapers in giant font!

As long as psychiatry continues to give the illusion that antisocial personality disorder not only is still a DSM diagnosis, but can be amenable to treatment to an alleged quantifiable degree, we will be guilty by such a dumb association.

As was said in the post, we don't know the full facts, and can't even say "yet" in this sentence because I think there is speculation and assumption going on already with some alleged third party reporters around the assailant, so what was the real, honest cause to his crashing the plane?

This is not about depression, and this is not about psychosis either, most likely, and, wait for the antipsychiatry crowd to start their chants about meds if it is irrefutably documented the copilot was on medication, it isn't about med induced murder either.

What the real dialogue among mental health providers the way the public dialogue is quickly escalating into is how mental health will be used to define employ-ability, and then what liability will we incur for being stupid enough to agree to do this on a large scale basis.

That should frighten the hell out of most providers who know better!

But killing 149 other people is not normal behavior. Mentally healthy people do not kill 149 people. Perhaps a psychotic break, perhaps a longtime personality disorder, perhaps a sudden onset of delusions or psychosis or hallucinations - we'll never know.

So not depression, no. But mental illness, more then likely.

as soon as i saw the network coverage i thought 'dear God, here we go again'. everything in life happens due to multiple factors that precede the action, mental illness or not. but that's not a "sound byte" or cliche that can explain a complex series of events to an audience in 6 minutes before the next commercial break.