Does "coming out" with your psychiatric diagnosis help? 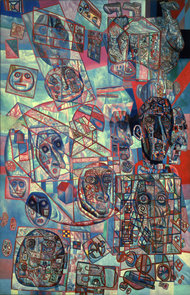 So I'm sending you over to read  a wonderful piece in the New York Times by Scott Stossel,  'Coming Out as Anxious."

The author wrote a book on anxiety and he discusses with his therapist whether it might be therapeutic to tell the world about his problems -- would it lessen his anxiety if he didn't have to spend so much energy pretending it wasn't there, making excuses, and covering for it?  He tells a good story.

My psychotherapist, Dr. W., understood my concerns. But he suggested gently, on many occasions, that revealing my anxiety would perhaps dissipate the shame I associated with it. Doing so might prove therapeutic, even liberating. “You’ve been keeping your anxiety a secret for years, right?” he would ask. “How’s that working out for you?”
He had a point. I was still terribly anxious, and often unhappy.
But I would retort that at least I was gainfully employed and not a laughingstock or an object of unwanted pity. Concealing my anxiety was in some sense working for me.

Dr. W. would counter that by sharing what I had gone through, perhaps I could provide solace to some of the millions of other people who suffer from clinical anxiety. Perhaps I could even, as he put it, “write yourself to health.”
In the end, I decided, with considerable apprehension, to go ahead and reveal my own anxiety in the book. It’s now been a year since my book was published. Did “coming out” help?
The short answer is: a little bit, yes. The longer answer is … well, let me tell you a story.
Continued: http://opinionator.blogs.nytimes.com/2015/02/03/coming-out-as-anxious/

Couch is a series about psychotherapy  .

After reading the piece, I would say that the people who have been psychiatrized -regardless of whether the labeling process was voluntary or involuntary- have very strong incentives to keep their issues to themselves.

The guy who wrote the piece is a high profile journalist in good standing with the press whose "only problem" is anxiety. Yet, in his bullish piece he could not deny that his decision probably had others talking about it behind his back.

So if a high profile journalist still felt that way, imagine an ordinary person who discloses things that are perceived as much worse, such as the aforementioned schizophrenia -which in the public imagination is still synonymous with being "dangerously crazy" - or a suicide attempt that was followed by a civil commitment.

The only way the stigma will ever go away, and the removal of homosexuality from the DSM is proof thereof, is if all the labels where to be removed from the DSM and the whole concept of "self appointed, unaccountable, mind guardians" inventing labels were to be abolished.

Stigma will continue until society as a whole accepts that what it currently calls "mental illness" is nothing but a normal -and welcome- diversity among humans.

I do not buy Dinah's notion that these things are "illnesses" because they run in families. Other things that our society values, such as scientific or musical talent, also run in families and nobody would think about calling creative talent an "illness".

What makes it an "illness" is that unlike musical talent, it is the source of suffering and an inability to function normally. Mr. Stossel describes horrible suffering, not being a little anxious or symptoms that are limited to a weird fear of vomiting the presence of former US presidents. See his article here: http://www.theatlantic.com/magazine/archive/2014/01/surviving_anxiety/355741/

But I do agree that people fill in the blanks in their heads and what they imagine will be different (and perhaps more understandable) if a person says they have anxiety, or panic attacks, or depression, then if they say they have schizophrenia or bipolar disorder.

I was not campaigning for anyone to come out with their diagnosis, I was just writing about the article. It is possible that for some people that the fear of stigma is worse than the stigma. I think people who've come out with being gay or trans often feel better --even if they are not greeted with the responses they like, there is still something to be said for not feeling like you lead a double life. There is also something to be said for being able to express yourself without people responding as though your emotions are all illness oriented as opposed to genuine emotions. It's a mixed bag. Have I written about this?

Part of whether you come out or not depends on how it will affect your family. My mother had treatment resistant bipolar , probably schizo-affective, and we kids were not only abused and neglected by her but strictly forbidden by our father to tell anyone what was wrong. As he fiercely warned us"none of your friends' parents will let their kids play with you if they know how ill your Mother is.' He was right. Because we had help, there was a facade of normalcy so we could have friends over sometimes . I remember at 13 seeing her manic at a church fair and a circle of church ladies laughing w the minister about her weird behavior. I dropped out of Confirmation class and didn't go back to church for 10 years.

Years later, after seminary and work as a chaplain to abused and neglected kids, after having my own kids. One of my kids became manic, psychotic, was repeatedly hospitalized before the age of 9. Our family were fairly open at church (couldn't hide his behavior) and we were loved and supported there. He was a cute kid, and older sibs were lovely, well behaved, and obviously well brought up. We were a Central Casting normal family hit by tragedy and people were sympathetic. When I fell into a suicidal depression, after two years of coping with my kid's crises, people sent casseroles. But something changed. From that time on, people treated me as fragile, stopped asking me to do anything, and relegated me to the ranks of mommies who babysit and bake brownies even a year after I had recovered. In the 15 plus years since, I have not been considered for any position of responsibility as a lay person in the church, despite being a trained and experienced minister and chaplain. I have the number of the Beast on me.

When we attended NAMI family groups when coping w a deeply disturbed sibling who needed our help, I several times tried to confront the negativism and vengefulness of some family members about their sick relatives. While realizing how beleaguered they felt, I could not abide the nasty things they said. At one meeting I exclaimed that I had a mood disorder but I was not a lunatic or dangerous, and they should watch their hateful language. I was ignored thereafter.

One more issue. A psychiatrist friend from church jokes that when new patients tell him how much they drink, he triples the amount. People put the least damaging face forward. Likewise with coming out about mental health. If I hear one more raginglg manic celebrity say with mock candor that they grapple with anxiety and depression, I will barf. People lie. So if you say you have anxiety, some will assume you are actually bipolar. It's tragic if, like me, you want to be truthful.

As to the reservations about coming out schizophrenia. Yup. Trying to help a loved one and keep prejudiced creeps in our town from attaching that label. No one in my family cares, but we live around savages. Middle Ages peasants for prejudice...So one tries to love and support the person, when insurance refuses to cover any care, and neighbors would run one out of town if they knew. America is the worst of the so called civilized nations to contend with a mental illness in.

And I would submit that the only reason Mr. Stossel suffered, from my own experience and what I have heard from other psychiatric survivors, is that people like you have made so called "mental illness" a "cause of concern" and not something that society should tolerate -and welcome- as it tolerates and welcomes creative talent. In fact, not all societies tolerate create talent. In many primitive societies today, still being a "warrior" able to conquer land is more desirable than being a creative person.

What the rest of us still "psychiatrized" by the APA demand is equal treatment: please leave us alone and do not include us in your own bible of "heretics".

In my field (public special education), I would lose my job. It would take a few years, but even as a unionized, tenured educator, the school would manufacture and mount the "evidence" and I would lose my job for cause. Can't have unstable people working with disabled individuals. It's happened more then once.

For me the most harmful part of receiving a mental illness diagnosis such as bipolar has been the stigmatization that I have felt. The stigma throughout our society against mental illness is very real. Many people have lost their jobs, job opportunities, relationships, and other potential opportunities solely because they were labeled with a mental diagnosis and not because of their behavior. Because of this many professional people or those with money will pay cash for treatment so as to not have it on their record which is the wise thing to do if you have the resources. Based on my own experience and the experience of other people that I know I would seriously caution anybody that is considering seeking mental health treatment to be aware of the consequences of receiving a mental illness diagnosis label that will possibly effect you for the rest of your life. My advice is to try to seek other avenues of help in times of emotional turmoil if possible rather then ending up with a mental illness label haunting you forever. if you do end up with a mental illness label I would advise discretion in whom you tell. I also understand and agree with how painful it can be to hide one's mental health illness. I believe the secrecy contributes to making the mental health problem even worse. I know it has caused my mental health to be worse. I know several people that have went without any mental health treatment because of the fear of the consequences in obtaining treatment. People should also be worried about there kids being labeled with a mental illness diagnosis as it may follow them forever.

One thing that makes me very angry is any mental health professional acting like it is no big deal to be labeled with a mental illness diagnosis. All of them are very aware of the stigma that exists and the serious consequences of being labeled with a mental illness diagnosis can have on a person's life. Many of the same professionals will avoid seeking treatment or hide seeking treatment for themselves because of the stigma and repercussions that can come from it. In my opinion I feel that they should have the common decency to acknowledge the harm that can come from being labeled with a mental illness and be honest about it with their patients. The worst thing to do is downplay your patience concerns about it.