The Shrink in the Shrink Rap Tie and Links to Interesting Articles. 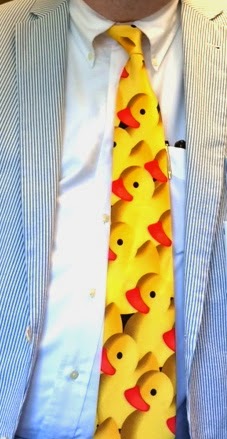 So I'm at work today, seeing patients, and I get a text.  Between patients, I check the phone and there in the body of the text message is a photo of a man I've never seen and he's wearing a duck tie.  The text is from a beloved friend who is a doctor (not a psychiatrist) in another state.  The photo is of the psychiatrist in their medical facility, he's come to work in a duck tie.  As it would happen, it's pure coincidence; he's never heard of Shrink Rap and has no clue that it's our blog motto, but this dear psychiatrist allowed my friend to photograph him and text me his picture, and consented to having his tie on our blog, provided we don't violate HIPAA for any of the ducks.  In case you wondered what your doctor is doing all day, he may be texting photos of ducks to his friends.

With that as an opener, there have been lots of interesting psychiatry articles on the web.  Let me give you teasers and links:

The Boston Globe has been running a three-part series on their front page about a man with a severe psychotic illness and how it has devastated him and his family.  A reporter followed the family for 18 months, do check it out here.

And while we're talking about the broken mental health system, Dr. Paul Appelbaum has some suggestions for how to fix it in The Guardian.  You can check that out Here.

Scientific American tackles the tough question of whether you should tell your boss you have a mental illness Here.

Here's a story I liked about a police officer who risked his life to pull a man off a bridge.  We need a good cop story once in while, and they come few and far between in the media these days.

Here's another police article in The Atlantic about the helpfulness of police Crisis Intervention Teams in San Antonio, and the importance of training the police to understand and help people with psychiatric disorders.  These teams decrease the number of people who end up being killed by police.

Our Hopkins colleague Dr. Kay Jamison had a op-ed piece in the New York Times on the difficulties of treating depression and how it's important that the psychiatrist be competent, check that out HERE.

In another moving op-ed piece in the NY Times, Roger Cohen talks about his search to understand his mother's struggle with depression HERE.

There's been a lot of psychiatry articles in the popular press.  This is just a few, but I do often tweet them when they come out, so do feel free to follow my twitter feed @shrinkrapdinah.

From the Scientific American article: "When Dave approached his supervisor about accommodations. . .he was met with some hostility. . .in May he left the organization. Now he has a new job as a peer specialist counseling people who are currently dealing with similar mental health issues."

I do think peer counseling does a lot of good, but come on! It seems as if the ONLY career option for someone who is "out" with a serious mental problem is "you can be a peer counselor!" Now this guy maybe had other options and was suited for this, and maybe he really wanted to do that, but I know that's the refrain where I live for those who want to work but cannot do a regular 8 to 5 job consistently. It's the ONLY option. Not allowed to have a "real" job, but you can counsel the other throwaway mental patients because society is too cheap to pay for mental health care (again, I do think there is value in peer counseling but I think state govt just sees it as a way to go cheap and pretend they care)- that's how it comes off to me.

I would never tell my boss that I see a psychiatrist, and I work in the healthcare field. There is too much risk that this would affect promotions, etc.

I think it's very brave of those who do share it, but I wouldn't do it.

Years ago I was pressured to apply for a job that was for people with severe mental illness where the employer gets a tax break for hiring us. I said no thank you. Offering a tax break to employers so they will hire people with mental illnesses assumes from the get go that we won't be capable of doing as good a job as someone without a mental illness, and that's a hell of an assumption. Some people may need extra help, and some won't. At work I'm just an employee, and I don't need or want to be known as the mentally ill employee.

i think catalover has a good point - while being a 'peer counselor' is often portrayed as an entry level/return to world of work position, very few people progress to 'real jobs' in settings that do not involve supporting others with disabilities. it's the difference between 'separate but ?equal classes for disabled kids", and true mainstreaming of kids with disabilities.
on a different note...love the duck tie! we all need a laugh so we don't 'quack up'!