Your Patient Died. Who Cares? 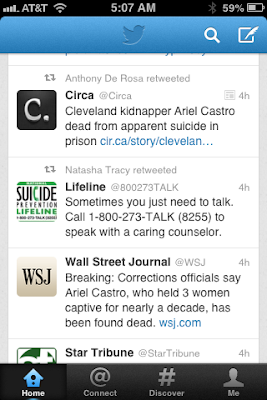 I thought I'd share what I saw on my Twitter feed as soon as I got up this morning. I immediately felt a blog post coming on, particularly after reading the Twitter comments as they rolled in. I felt a bit sick, knowing what some of my colleagues in Ohio must be going through right now. This post is for you.

When it comes to patient suicide, correctional psychiatry is probably one of the higher risk subspecialties within psychiatry. The average prisoner has three risk factors for suicide before he even steps into the facility: he's male, young, and has an active substance abuse problem. There's even a recent study to suggest that being charged with a crime increases one's risk of suicide, even if that person is never incarcerated.

Considering this, if you practice correctional health care for a few years it's pretty likely that at some point you will experience a patient suicide, either as a health care first responder, as an administrator or as a mental health clinician. I feel like I need to write this blog post to warn you about something:

Don't expect your friends, family and colleagues to understand why you're upset that somebody died.

I know that sounds counterintuitive, but that's just the reality of correctional health care. The general public---and even some physicians---are going to instinctively give you a "who cares? He's just a criminal" response even if they don't know the person or what he was locked up for.

Let's consider the responses I've seen just today regarding the suicide of Ariel Castro, the man who kidnapped three women and held them prisoner for several years (comments drawn from a network news site):
Yeah, that could be your patient they're talking about. And all your patients watching the news or reading a newspaper will see this public reaction and know that the rest of the world truly could care less about them. Your job, temporarily, is about to become much harder. Fingers will be pointed, armchair psychologists who have never set foot in your facility will "know" how the system or you as a clinician must have failed, and new redundant policies will be created that will make your health care delivery system less efficient.

This will pass. Eventually, people will grasp the fact that this man who successfully hid multiple felonies for several decades probably also had the skill to hide a planned suicide attempt. Your colleagues in other parts of the country will step up to the plate to remind the media, and the general public, that correctional and forensic psychiatrists are taking an active role to implement suicide prevention policies and training that have dropped the correctional suicide rate substantially in the last twenty years.

And maybe, just maybe, it will lead people to recognize the importance of what you do.

Just a few thoughts from inside the walls, given that next week is National Suicide Prevention Week.
Posted by ClinkShrink on Wednesday, September 04, 2013

I never understood the whole suicide controversy. If you are physically ill you can refuse treatment or go AMA, and go home because you choose to die. But if you are mentally ill you are not given a choice. You are forced to live by law and by social norms. Mental illness can present just as painful as terminal illness yet one is given the green light and the other not.

Glad he wasn't your patient.

Great essay. Thanks for sharing this unique point of view. Never thought of it this way...

Thanks for sharing your unique point of view. Never thought about it this way...

The public is shockingly harsh, especially when commenting anonymously online. Vigilante justice is celebrated even for minor infractions, people are guilty until proven innocent, etc. There is also extreme callousness regarding suicide, the online equivalent of a crowd yelling "Jump!" to the terrified person clinging to the building ledge. I don't fully understand it, but faceless mobs apparently embrace primitive dynamics (splitting, projection) much more readily than individuals typically do.

Humans are cruel. We have been cruel since sacrificing children to Molech, battles in the colloseum, public humiliation punishment, the crusades, the inquisition, public executions, the witch trials, slavery. The list goes on. The only thing that has changed is the means of participation. The internet makes spewing hate faster and easier.

Suicide is sad for those left behind but the person who completes it is no longer suffering. I do not advocate for suicide and would try to talk someone out of it, but I would not tie them to a bed full of haldol dreams to force my will upon them. That gives no validation to their suffering nor does it cure suicidality. Inmates have it harder than most. They may have remorse, guilt, loss of support system, and the knowledge that they are hated by hundreds if not thousands of people. We are social creatures. Being hated is not desirable .

Steven Reidbord MD, a very large number of people want desperately to have someone to hate (q.v. lynching), but know that, generally, giving in to their sadistic urges is socially unacceptable. Their hunger to be cruel is at odds with their need to maintain their self-concept as virtuous.

In our society expressing hatred towards those convicted of crimes -- or, worse, merely accused of them -- is socially acceptable, which presents an almost irresistible opportunity to those whose drive towards sadism has been otherwise thwarted by civilized mores. They can express all the of grandiose-superior animosity and savagery towards criminals that they want, and still hang on to their halos.

This is reflected in how vengeful people who are utterly uninvolved and unaffected by a case can become, and how often their responses can become non sequiturs. For instance, about eight years ago, a teenager was arrested for killing her mother in Alaska, and her personal blog was discovered and promulgated via social networking within hours of the news coming out; hundreds if not thousands of comments were left on the pages of her blog including, of particular note, many messages and images threatening sexual violence. Why would someone, much less a bunch of someones, threaten an accused murderer with rape? No particular reason: they just wanted to threaten somebody (some female body) with rape, and here was a socially acceptable target. Additionally, the inundation of new aggressive content made it hard for law enforcement to use the blog for evidence; why would people who wanted to see someone prosecuted for a crime deface evidence and frustrate law enforcement? It didn't occur to them they were doing so, because enforcement of the law and the pursuit of justice was the last thing on their minds. They didn't actually care about the crime she was accused of committing or justice, they were delighted to have a legitimate opportunity to indulge their appetites for hate.

This also explains the connection with crowds. The question of whether one can continue to think of oneself as virtuous after committing a contemplated act of aggression is entirely a social one: virtue is socially constructed and managed by the part of the brain which monitors others for conformity. If the others around you seem to be endorsing the proposition that an individual is a legitimate target for hate, it liberates one from the normal constraints against doing so.

Wow, and you wonder why antisocial behaviors flourish in the indulgence of this society. Kidnap, repeatedly rape your victims, treat them like caged animals, brutally force miscarriages, and then ask for forgiveness.

Keep up this kind of rhetoric, the evil of the world will win. And either gun you down or stab you in the back once you are just in the way of the next triumph to earn.

Oh, write about the injustice of the Boston bomber next?! Sorry, that is why we have prisons and graveyards. But, you all just keep advocating for the ilk of the world. Don't hold your breath waiting for their altruistic thank yous.

Skizzy: Thank you for the historical perspective, and you're right. I occasionally think that civillization is a myth we all agree to live by.

Minder: Yes, if the monster is "out there" somewhere then it couldn't possibly exist within any one of us, could it?

Joel: No I don't do it for the thank yous but I do get thank yous once in a while. I just hope that someday if I'm wheeled into an emergency room with a stab wound to the chest or in need of advanced cardiac life support I don't have some doctor hovering over me trying to decide if I'm one of the "ilk" worth saving. That wouldn't be much of a doctor, would it?

Awwww clink. My boyfriend is an ER Doc.He would take care of you. He patches up good guys and bad guys alike. People who do bad things or make mistakes need doctors too. Is there no chance of redemption for the ilk of society? Do you have a prescreening checklist that identifies who should be given medical care and who is not worthy?

If you want to see the depths of irrational violence, have a look at the comments on this CBS story.

Of the 972 comments, 60 or so are non-sequiturs, 4 in support of necessary medical treatment, the rest calling for rape, disemboweling etc.

You'll always find some who are dangerously smug. But here it's obvious it's by far a majority of those commenting, by over 100:1.

Clink : maybe I'm too .. cynical? My first reaction was that I'd look carefully to see there was no evidence that the deceased wasn't "helped" to "commit suicide".

Zoe: An internal death investigation would cover all possibilities. While a murder of an inmate on protective custody (if that's what he was on) would not be impossible, it would likely involve someone on the custody side of things to lock/unlock doors and look the other way. And inmates often inform investigators when they see CO's do things like that, or the killers themselves brag about the murder to peers. Not impossible, but a less likely scenario.

Death is even more mundane than human cruelty. The real tragedy would be if someone else -- anyone else -- gets the blame for what this man chose to do himself.

Death is even more mundane than human cruelty. The real tragedy would be if someone else -- anyone else -- gets the blame for what this man chose to do himself.