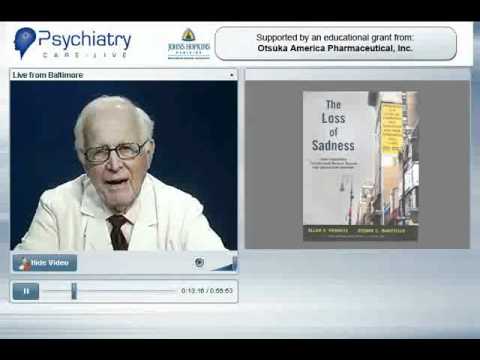 Paul McHugh, MD, esteemed past Chair of Psychiatry at Johns Hopkins, writes in the criticism from Tom Insel from NIMH. Paul eloquently explained his point, which makes a lot of sense.
Wall Street Journal about how the new DSM fails to account for causes, similar to the

With its new manual, the APA might instead have started taking steps toward a system of classification that, as in medicine, organizes disorders according to what we know about their natures and causes. Such knowledge, rather than checklists of symptoms, would then direct treatment and research.

Psychiatrists know, for instance, that depression and anxiety can derive from a number of different sources: cerebral diseases such as schizophrenia and bipolar disorder; alcoholism or drug addiction; experiences of loss, deprivation or trauma; and, more generally, a vulnerable temperament, characterized by introversion, shyness and emotional intensity.

Deciding which of these sources, alone or in combination, applies to a particular patient requires hours of evaluation. Prescribing an appropriate treatment involves not checking symptoms but determining who the patient is and what he or she has experienced and done.

DSM-5 displays none of this thinking. It remains a field guide organized by symptoms, clustered in categories that can expand without limit. Official, APA-approved psychiatry seems to lack the will to change. It justifies its stagnation not only by reminding its members of the chaos of the 1970s but by claiming that the U.S. health system would not pay psychiatrists if they tried to know their patients the way that they could and should.


I have not seen the issue of DSM5 updates discussed in all the recent rancor. Some of you may know that the DSM5 is expected to have periodic updates, e.g., 5.1, 5.2, 5.3, etc., not unlike how Apple's OS X comes out with a new "point" version every year or two. I expect that, as delineated causes of different psychiatric disorders arise with new research, these will be added to future incremental updates. However, both Drs Insel and McHugh have valid criticisms that the new version, released today and already #12 on Amazon's bestseller list, missed an opportunity to reframe the organization of illnesses based on causes, not symptoms. We'll have to wait to see how the generated heat tempers the 5.1 version, mishegas notwithstanding.

So according to Dr. McHugh's logic, introverts like Eleanor Roosevelt, Al Gore, and Clint Eastwood are mentally ill. A big fat sigh!

Getting to know your patient should not just be restricted to psychiatry. Your orthopedic surgeon and gastroenterologist should get to know you too. But psychotherapist a treatment conducted in an artificial setting, does not get you to know the person you treat, and if it did, how many years should you take to get to know the patient before you decide how to treat them. Many might be dead by that time.

Yeah, gotta love the 5.1, 5.2 mentality of progress per the internet/immediate gratification culture. Oh, there is the out, come up with a lame or poorly construed diagnosis, just follow up with an updated version to wipe it out!

What next, the DSM is only available by the net?

Why not read Henry Nasrallah's editorial piece from this month's Current Psychiatry, I posted the 2 pages with my take earlier today at my site, cantmedicatelife.com.

This is what the DSM 5 is about, folks. The more things change, the more they truly stay the same.

Is it possible to view the lecture? I tried going through the Hopkins Psychiatry Care Live site but could not find this presentation. Thank you!

Marginal Revolution endorsed a London Review of Books article* on DSM-V that I enjoyed. *http://www.lrb.co.uk/v35/n15/ian-hacking/lost-in-the-forest